Feeling lucky? Then be sure to play 3 Genie Wishes where the Genie can help you to win the prize money of your dreams! This 5-reel, 50 pay-line slot game can be played on mobile and desktop devices from as little as 50p per spin or as much as 250.00 per spin.

Accordingly, each spin becomes just that little more exciting and chancier.  This game is a rarity in the respect that a 50 winlines game isn’t regularly available on the market, particularly one with so many symbols and several features in tow. You can also try these online slots today!

This game is Arabian themed and bears a resemblance to Aladdin and has so many fun features such as Stacked Wilds, a Bonus Feature, Free Spins, and Sticky Wilds to help you win some huge prizes! WizardSlots brings you a variety of games similar to this one that you can also play.

Pragmatic Play is a software development company, which specialises in online casino slots games. They develop high-quality and fun to play games for mobile and desktop devices so you can play on the go or at home. Their gaming content is unique and hugely popular, boasting a library of over 80 slot games which are highly innovative, and they have a dedicated mantra to produce some of the best games on the market.

Pragmatic Play Originated in 2015 and is considered by many to be one of the fastest-growing provider of slot games as a result of its customer focus approach to business. Their 100+ plus team is formed of the most revered igaming specialists within the market, enabling them to create the most incredible games to date.

The Siliema based headquarters within the island of Malta has enabled the Pragmatic Play team to build a steady reputation as one of the best-known developers across the world. The growing competition within the market has only inspired Pragmatic Play further resulting in their rightful place as an award-winning game studio.

Not to mention, the company just missed out at the EGR Operator Awards. In consecutive years, 2016 and 2017, shortlisted for Game of the Year, for Hot Safari and Queen of Gold respectively, but ultimately fell short of securing the high-status prize. Regardless of not winning, these nominations emphasise that Pragmatic Play offers some of the best games available, some of their most popular titles include: 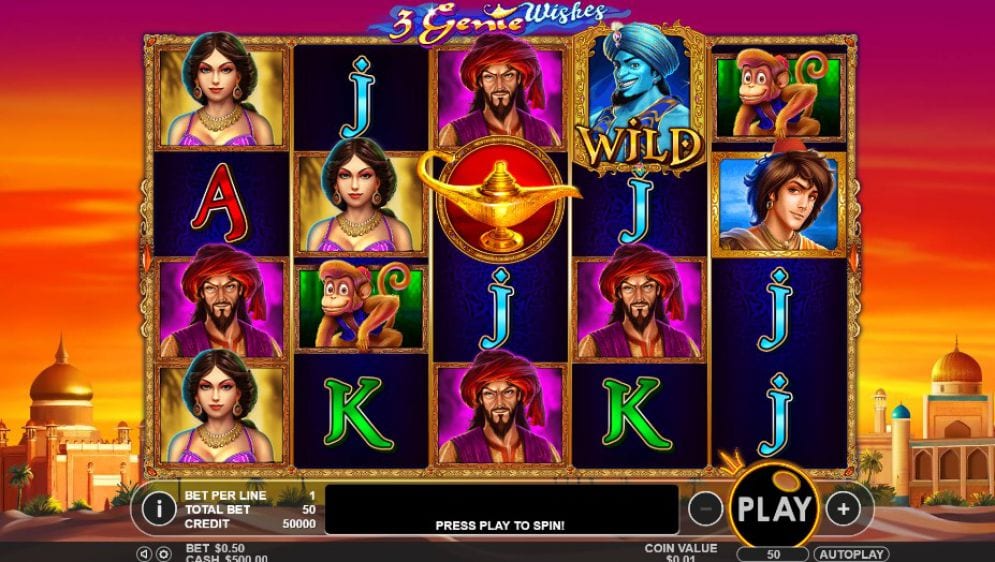 Gameplay of this Genie Slot

This game features symbols with lower and higher values, the lower value symbols include A to J symbols along with a monkey, parrot and 3 Arabian characters who can offer you pay-outs of 150, 200 or even 300 coins! You may read more details below and discover why it's known to be included in the top online slot games.

The great feature of 3 Genie Wishes for the player is the start point which is reasonable 250 credits, a total that can be increased up to 0.50, preventing you from breaking the bank without decreasing the excitement of the game. What’s even better about the game is the opportunity to engage the automatic spin feature, which will keep 5-reels rhythmically spinning without you lifting a finger. Up to 1,000 rounds can be played at any one time, but they can be stopped on request providing you with extra flexibility.

The Wild symbol is, of course, the Genie, and when he appears, he replaces all other symbols on the reel apart from the Scatter symbol. The Wild symbol rewards you with pay-outs of 20, 100 or 400 coins. The Wild can also be Stacked to turn entire reels Wild, and it can land on any of the 5 reels as well as on multiple reels on a single spin.

The bonus round is likely to be your best friend within this game, by selecting one of three items, of which there are four possible outcomes. Free spins present itself as one of the more attractive options, although it sounds somewhat played out. Spins offer two options, whether you get them with Raining Wilds or Sticky Wilds. The spins are so rewarding because of how readily the wilds rained down. On the other hand, every experience will be unique for you as players, so the only way you can find out is playing for yourselves.

The Scatter is the Golden Lamp, and when it lands on reels 1, 3 and 5 on the spin, it will reward you with a payout equal to your total bet amount, and it will also trigger the Bonus feature.

During the Bonus feature, the Genie will appear, and you will have to choose from a Treasure Chest, Urn or Sack. Choose one which will reveal the following prizes: 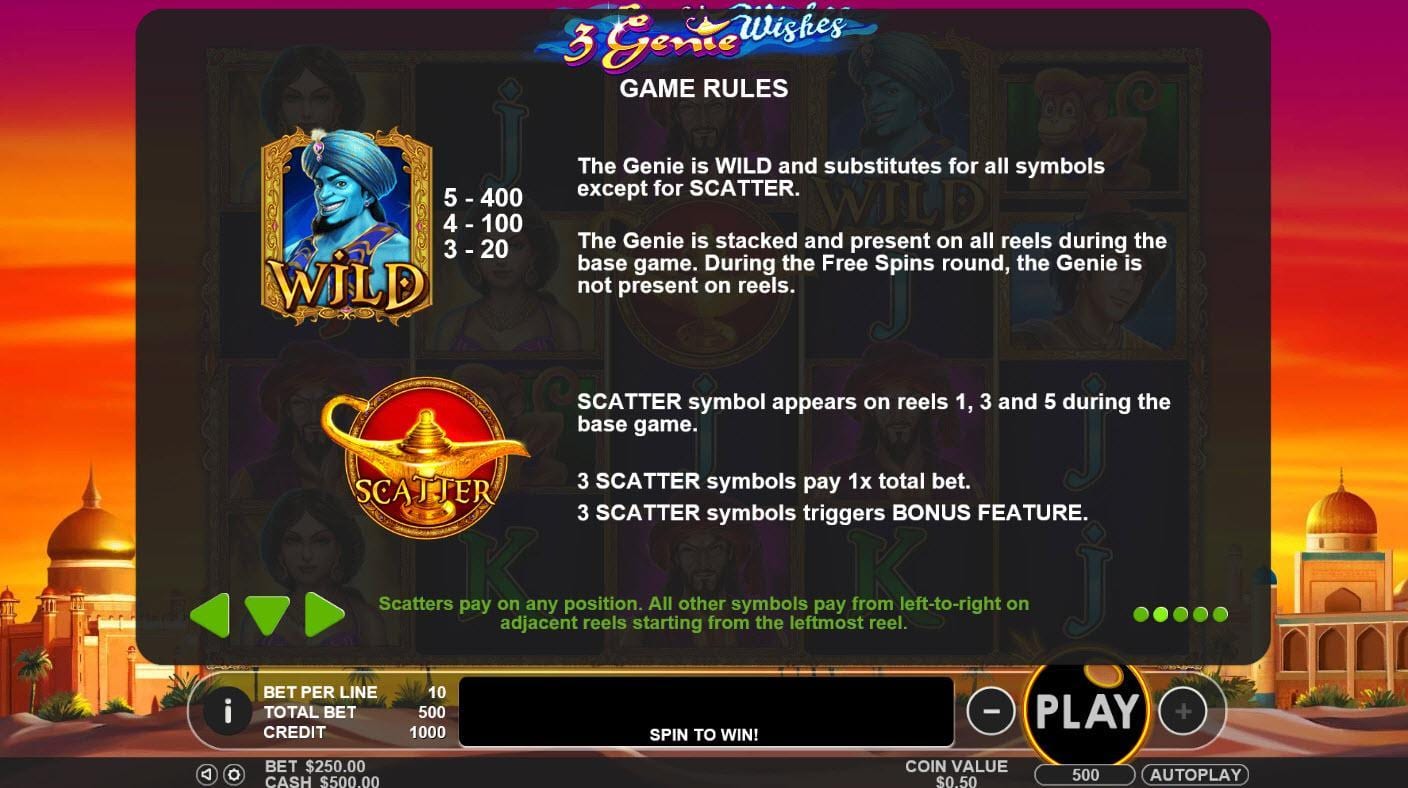 Pragmatic Play adapted a renowned storyline into a great game which can be apricated by all players. In particular, we adore the gameplay, more specifically the flexibility it gives the player as well as the twists and turns, which provide maximum excitement throughout gameplay.

Furthermore, the overall cost for participation is minimal, which is a huge positive for first time players who want to be eased into the game. There are many fun features and fantastic prizes to be won with 3 Genie Wishes, so pay today for a chance to win your fortune! We're sure you'll have an amazing time playing this game too.