Set in the stunning grand canyon landscape during sunset, Buffalo King Megaways is visually similar to the original Buffalo King slot. We get the feeling that Pragmatic hasn’t attempted to change too much, except that everything is more extensive and bolder. We say everything, but the 5,000x potential is actually a measly 5.33 % of the announced max win in the original title.

Of course, Pragmatic has changed their tune lately, and they want to distance themselves from all the past rumours of “exaggerated potentials”. Of course, this is a good thing, but there’s no need to overdo it either. The main attraction is the accumulating multiplying multiplier wilds you get during the bonus round, and fans of the original will hopefully appreciate the more honest approach.

How to Play Buffalo King Megaways

Experienced gamblers always check the paytable – most Pragmatic Play’s versions are incredibly volatile. For example, for Buffalo King Megaways by Pragmatic Play, the default RTP is 96.52%. But this does not mean that casino customers will win every round. With this version, any web platform returns more than 95% of its profits to gamblers, but it can be one player.

At the bottom of the paytable, you can find the standard icons from 10 to A. You get a few coins for each chain, but the winnings are not that great. Card cells rotate between elk, wolf, eagle, and cougar, the primary graphic objects. It is these chains that you should combine to hit big jackpots. Anyone who wants to try Buffalo King Megaways mobile slot should figure out the cost of such symbols.

Like most Megaways slots, Buffalo King Megaways utilises a cascading mechanic, referred to as the tumble feature. It kicks in after every win to remove winning symbols from the reels. New tiles drop down to fill the empty spaces, triggering another win. Tumbles keep on coming as long as wins keep on lining up.

What you also really want to see is 4 or more scatter symbols hitting the reels. When this happens, you're handed 12, 17, or 22 free spins as well as a win of 5x, 20x, or 100x for 4, 5, or 6 scatter symbols in view. Free spins make use of a win multiplier, though interestingly, it's not the progressive type typically found in a Megaways game. Instead, wilds now appear with x2, x3, or x5 multipliers attached to them.

These values accrue on single spins, meaning you might get an x2 on the initial win, then an x3 appearing on the subsequent tumble. The total amount won from that spin sequence is then increased by x6. Multipliers do not increase forever; instead, they reset between free spins. Finally, the bonus round may be extended by +5 free spins each time 3 bonus symbols hit - without limits.

Last up is a feature buy option, where you can trigger free spins for a cost of 100x the total bet - where available. 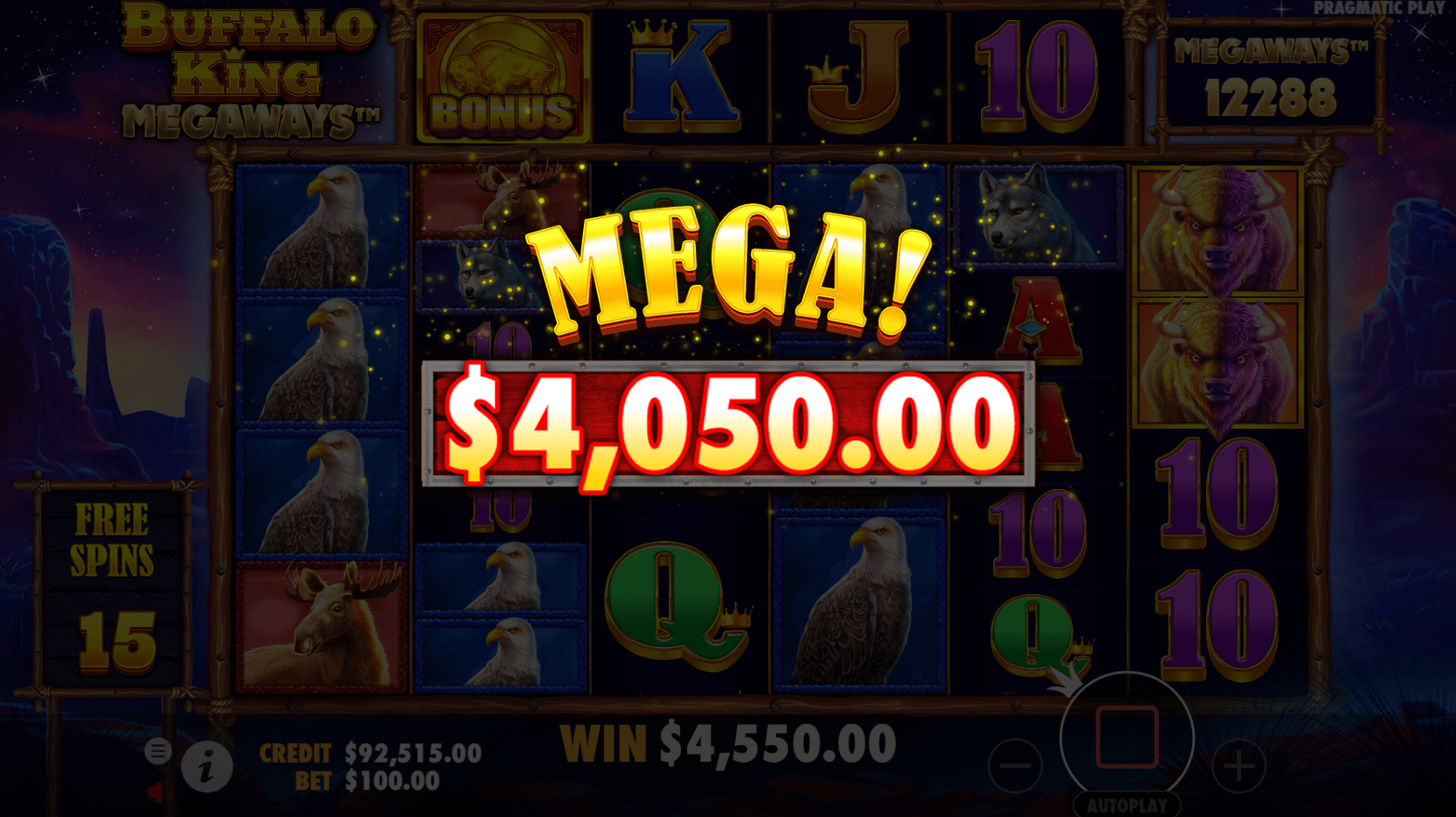 Fans of the older game should be pretty happy with what Pragmatic Play has done in the remake. Wistful cartoon majesty made up much of the first's magic, and this has been faithfully recreated here. Juicy multipliers were another key draw, which Pragmatic Play has both altered and retained at the same time.

Buffalo King Megaways' headlining numbers are not as impressive as its predecessors, but how realistic were they anyway? As the community has slowly come to realise over the years, the advertised potential in many of Pragmatic Play's releases has been ridiculously exaggerated to entice players.

When putting features under the microscope, it has to be said the multiplier system is similar to the one used in other slots like Sweet Bonanza. However, introducing multipliers via wild symbols changes the standard progressive system following cascades that might intrigue Megaways connoisseurs.

There are pros of cons to using this method, of course. It is excellent when several wilds appear throughout a spin cycle, though it can mean an absence of multipliers if wilds don't hit, even if you're powering through cascades like there's no tomorrow.

Moving onto max win, and despite the extra ammo Megaways brings, potential had taken a significant nosedive. In short, Buffalo King Megaways commands the princely sum of 5,000x the bet – an increasingly common amount from Pragmatic Play at the time of review. In contrast, the originally touted figure of 93,750x kind of felt like a boffin dreamed it up with a calculator, eyeballs deep on a desert-based mescaline trip.

The rather low potential for a Megaways powered slot undoubtedly comes across as a bit odd. However, being honest about what may be realistically achievable rather than making up some dream figure to lure players in is likely a better decision if you wish to remain in good standing with regulators (and your customers).

All in all, the Buffalo King Megaways makeover can, by and large, be counted as a decent slot. The stats might not be as sexy, and it doesn't really bring much new to the table, but everything else has been enlarged during the conversion process. As well as buffalo fans, players interested in seeing a slightly different use of multipliers in a Megaways game might be tempted for a look. 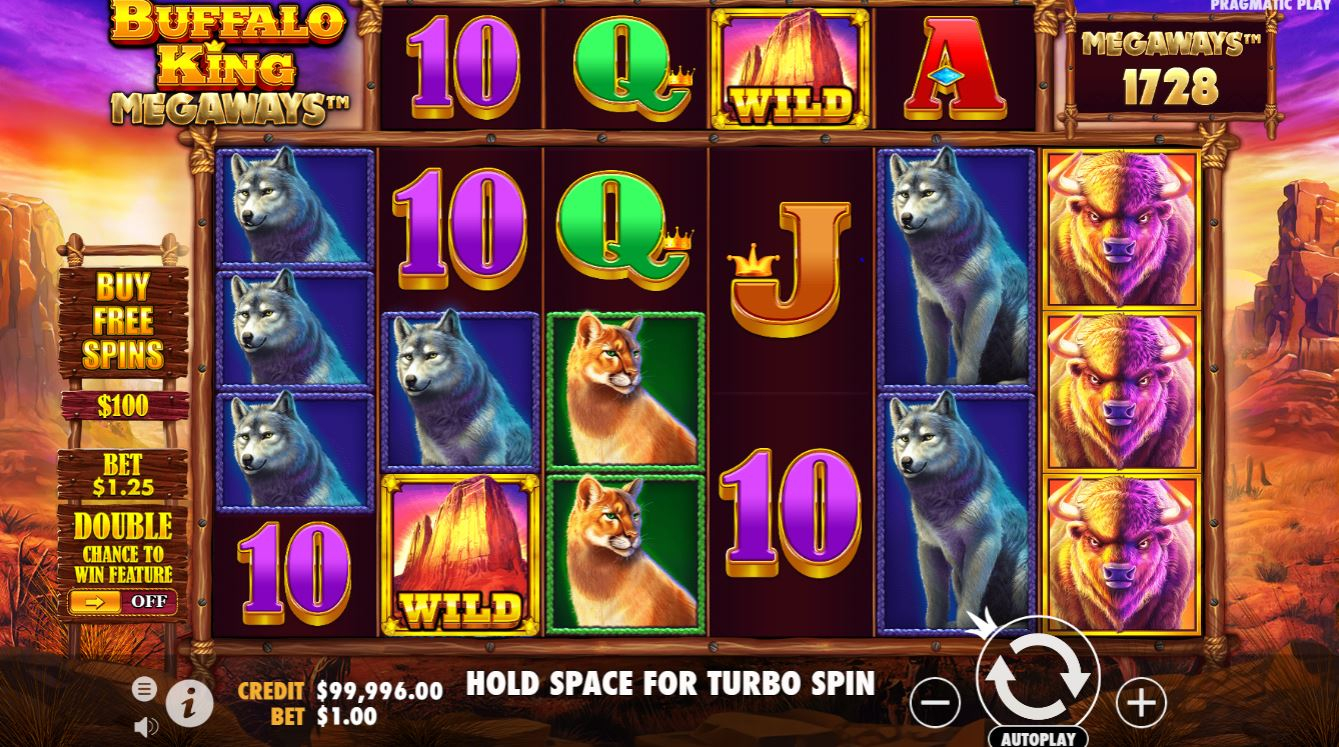 Cliffs and canyons are visible in the background, light music – what else do you need to relax? Big wins, of course. In this regard, Pragmatic Play’s product is promising. When people decide to play on mobile in Buffalo King Megaways by Pragmatic Play, they can use the multiplier principle.

However, this involves a departure from the progressive direction. If 4 Scatter symbols have landed on the reels, users play 12, 22 or 17 free rounds. When gamblers see 1 or 2 more pictures, the game will increase the number of coins on their accounts 5, 20 or 100 times.

For those who prefer the Buffalo King Megaways slot demo version, extra rounds are exciting. The cascade principle greatly influenced the profitability of such spins. Of course, this method has its pros and cons. When wilds appear, it may mean that there are no multipliers. But if the wilds don’t land, the multipliers are instrumental in acting out even if you enable the cascading method.

Like most mobile compatible games with huge jackpots, Buffalo King Megaways free slot uses a cascading mechanic. After each winning round, users can activate such a mode and remove dropped symbols from the reels. This way, anyone can win up to 1,030,000+ credits on one spin. Try your luck out now!