Great Rhino is a tremendous new slot online game, If your someone who has always dreamt of visiting the African savannahs, here is your chance to do it without even leaving your home. And there’s the chance to win some pretty wild cash prizes, too.

Do not be frighten or scared of the animals in which you will encounter on your journey, charge towards greatness in the form of magnificent rewards. The opportunity to become the king of the African planes doesn’t come around often, so seize the day by trying your hand at Great Rhino.

Developed by Pragmatic Play, this company is among the leaders in the online casino community and that reputation is built on games such as this. Detailed graphics and some smart bonus features make for a very slickly produced game from them and Great Rhino is just one of over 80 online slot games that they have developed.

Founded in 2015, Pragmatic Play is considered one of the quickest growing providers of online casino and slot games. Through the accumulation of 100+ highly-skilled team full of masterminds who develop each incredible game from the company's headquarters in Sliema, a resort town located on the east coast of sunny Malta.

Both regulated and mobile-focused, Pragmatic Play underlying passion for premium entertainment is unrivalled. The company continuously strives to create the most engaging and evocative experience for customers across all range of games, including slots and bingo.

If you’re interested in discovering some more games that Pragmatic Play has to offer, then why not have a further look around the Wizard platform via our ‘All Games’ page or take your pick from the list below:

With the mobile and tablet usage on the increase, Pragmatic Play games are designed to work on all the platforms web, desktop and mobile. The games are carefully engineered for best performance on various iOS and Android devices. Go ahead and play slot games on the internet now. 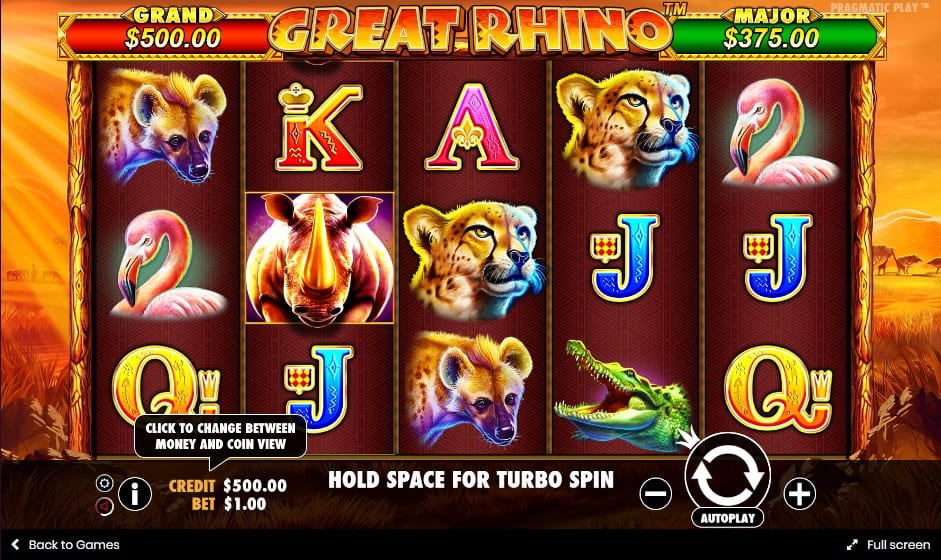 About the Great Rhino Slots Game

As mentioned, this game has an African savannah theme so your reels are going to fill with animals that you might expect to see on such lands. Set upon a gorgeous backdrop of the area in question, this a well-designed and good-looking game for sure that captures the natural beauty that the theme demands. This is among the top online slot games popular to new players because of its outstanding theme!

The higher value symbols are all made up on animals from the region and include the rhino - makes sense - a crocodile, a leopard a flamingo and a hyena. That’s would be a messy combination all at once. Lower value symbols are made of traditional cards, with Jack, Queen, King and Ace filling these roles on the reels.

The wild here is occupied by a blue disk displaying a rhino and this will replace all other symbols to help form winning combinations. All other symbols that are, barring the baobab tree scatter symbols which only appear on reels two, three and four.

The traditional layout of great Rhino will be familiar for regular players as the screen is filled by buttons common to the slot scene. Including the ‘Spin’ button, Turbo Spin’ and a menu for configuring the coin value and coins per line. 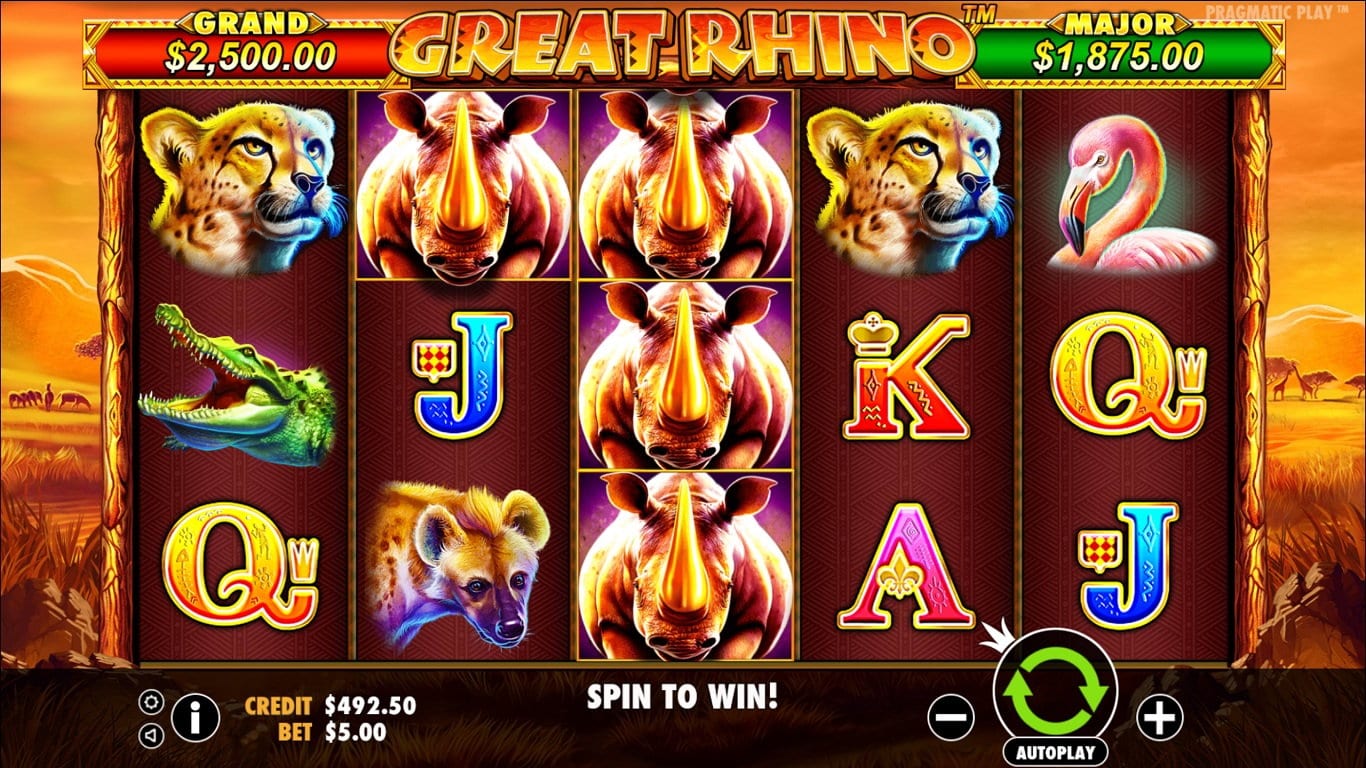 By clicking the paytable on the lower left side of the screen enables you to learn more about the game rules and important combinations that can earn the top prize.  This feature is extremely coinvent for new players or those who want a referrer on the rules.

As for the bonus features in Great Rhino, Pragmatic Play has set up a Super Resin feature, here. This round is triggered when at least two reels are full of rhino symbols and those reels will then freeze in place for the first three of your free respins. Should any further rhinos land on the reels, they, too will freeze in place and award one more spin.

The reason the rhinos are so integral to the game is becoming more obvious now. If at the end of the Super Respins Feature, 14 Great Rhino symbols are on screen, the Major Jackpot is awarded instead of win lines. Furthermore, filling each and every position with rhinos will end the free spins round and win you the Grand Jackpot prize. The Major Jackpot is fixed at 350x your total bet. 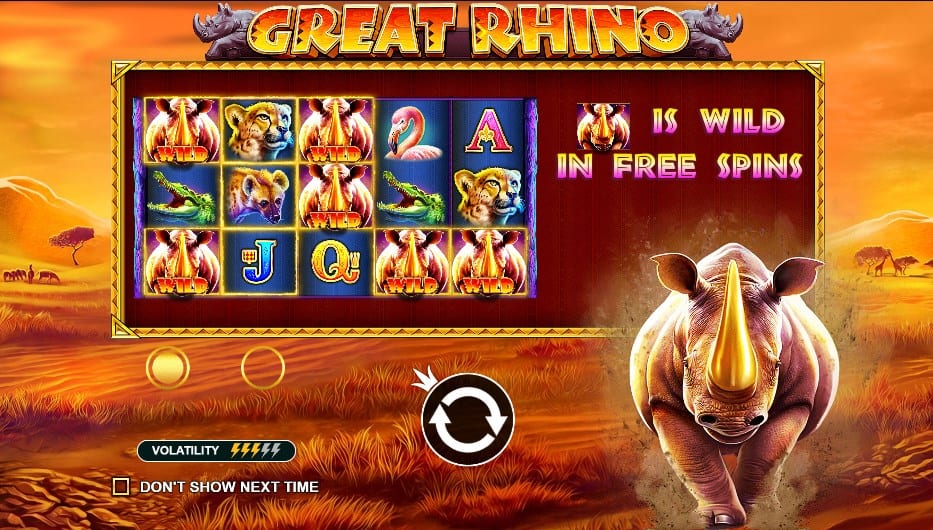 As sure as the Kilimanjaro rises like the Olympus above the Serengeti, Great Rhino offers the player a great gaming experience with a chance to win wild cash prizes. All in all, this is a very well-made game from Pragmatic Play with smart graphics and even a soundtrack that compliments the savannah theme really well.

Two different jackpots and two different bonus rounds add the chance of some very sizeable wins, too. If you enjoyed Great Rhino, then why not try out The King slot, another jungle themed slot game bonanza.