Heart of the Frontier

Heart of the Frontier is a Wild West-themed, medium volatility slot from Playtech. It has an RTP of 96.09% and an available maximum potential win of up to 500x your wager. With bets ranging from £0.20 to £5, this slot is played on 5-reels and 20-paylines. It also has bonus features, including expanding wilds and a free spins round.

Heart of the Frontier Slot Review

Heart of the Frontier is an exciting online slots from Playtech. Like an old Western, it focuses on the sheriff trying to apprehend the bandit, and you can get in on the action!

This medium volatility slot is filled with interesting characters as well as bonus features that could help you potentially win up to 500x your bet.

It has an RTP of 96.09%, putting it at the industry average. This, combined with an accommodating stakes range of £0.20 to £5, means Heart of the Frontier is a rather middle-of-the-road slot and may appeal to a variety of players.

Read on to learn more about this Wild West slot, or click on the ‘Play Now’ button to begin spinning on Wizard Slots casino online.

How To Play Heart of the Frontier

As always, the first step is to place your bet amount. The stakes range in the Heart of the Frontier slot starts at £0.20 and goes up to £5. You can change your stake by using the +/- buttons below the reels.

Once satisfied with your wager, you are ready to hit Spin.

There are 20-paylines in Heart of the Frontier; these pay out from left to right, beginning on the left-most reel. A winning combination is formed by 3 or more matching symbols landing on one of these paylines.

The game also contains a regular wild symbol, along with 2 expanding wilds. 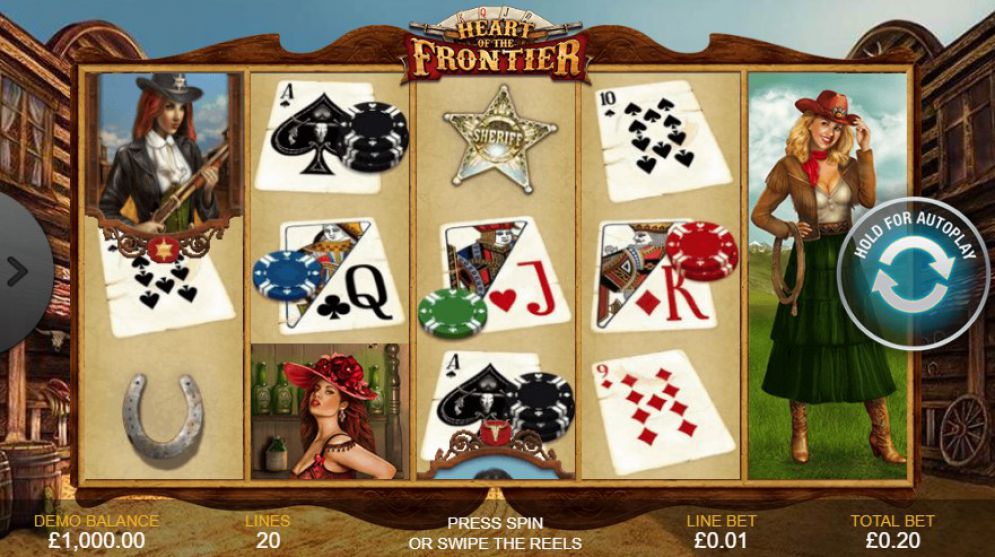 The game's logo is the wild in this slot; it can substitute for any symbol, except the expanding wilds. This is also the highest paying symbol in the game, awarding up to 500x your wager if you match 5 on a payline.

The Sheriff and Bandit symbols are also wilds, but when they land, they expand to fill the reel they are on.

They stay active for the next few spins and move across the reels, the Sheriff moves 1 reel right at the start of each spin, and the Bandit moves 1 reel left. They are removed once they reach the end of the reels, or if the total bet amount is changed whilst they are on the reels.

If both the Bandit and Sheriff are on the reels at the same time, the Showdown Free Games feature is triggered.

Upon being triggered, you are awarded 5 bonus spins.

All Sheriff and Bandit wilds lock to the reels; this includes those that triggered the bonus round and any that subsequently land during the feature. The multiple locked in place wilds could help form potentially winning combinations more easily.

When the bonus round ends, the shootout begins. The winner of the shootout remains on the reels when returning to the base game and acts as the normal expanding wild from this point, moving along the reels on each spin.

Heart of the Frontier RTP & Volatility

Heart of the Frontier is a medium volatility slot with an RTP of 96.09%; this is considered average for online slots. 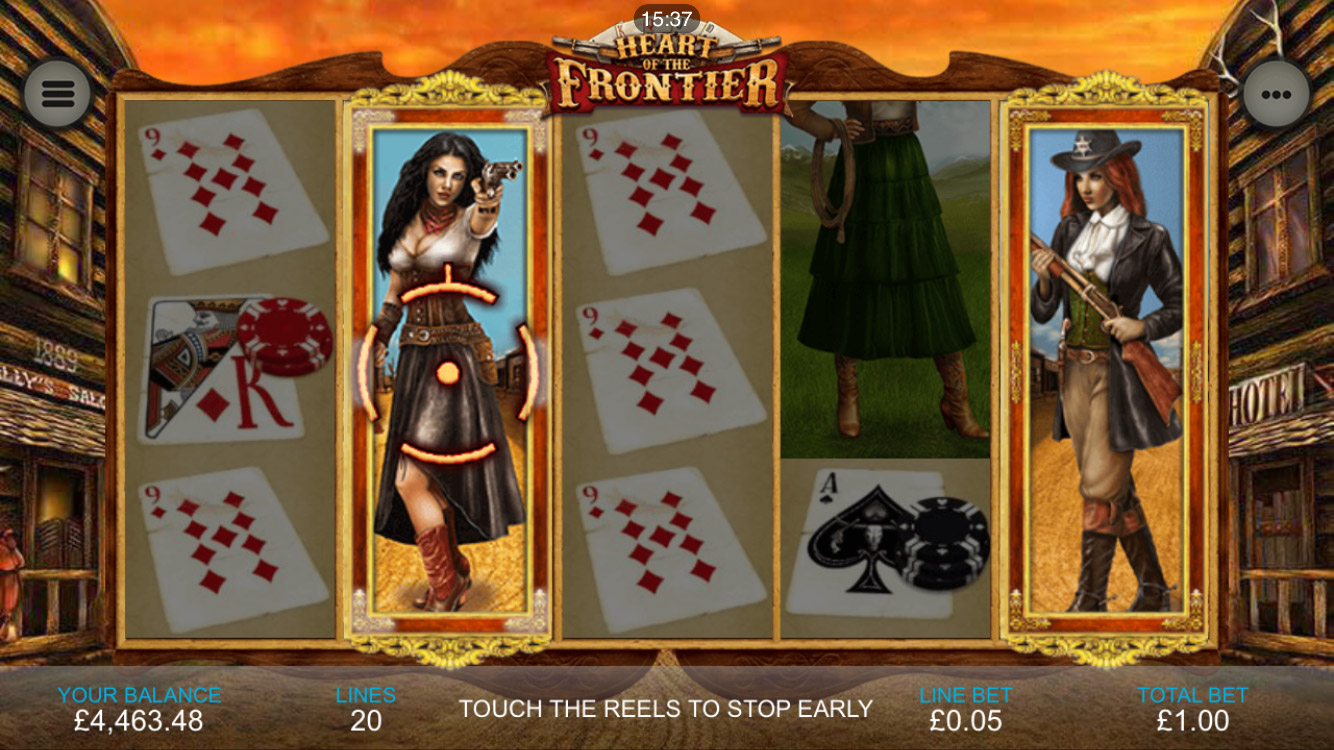 Heart of the Frontier has a Wild West theme, this is not an uncommon theme for online slots, but this slot does it exceptionally well.

The slot’s design is where it really shines; the attention to detail can’t be missed. The slot is particularly intricate; the background is a typical Western town with wooden buildings, and the detailing of the tiled roofs and the wood itself is impressive.

The picture symbols are highly detailed, but even the other symbols have character; the playing cards featuring imperfections such as slight staining and folds are subtle, but add to the authenticity of the slot.

This slot’s soundtrack further adds to the immersive gameplay as, during the base game, there is just the sound of the busy street, horses neighing, carts moving, and men shouting.

During the bonus round, typical Western music plays, evoking the image of the classic duel at high noon associated with the Wild West.

Heart of the Frontier Review Summary

The Heart of the Frontier slot is beautifully designed, the intricate detailing of the game is impressive, and the soundtrack adds to the immersion by offering sounds of the environment, rather than music. This slot leans into its theme wholeheartedly, and it pays off.

The gameplay stacks up well; the slot lacks a bit on the animation side, with the little animations present being relatively basic. However, this is hardly noticeable when watching for the bonus features that could potentially provide the chance for big wins.

This slot will transport you to the Wild West and provide plenty of adventure. The stats are quite middle-ground, but the bonus features have the potential to be rewarding.

If this rootin’, tootin’ slot appeals to you, join Wizard Slots today and be playing in minutes!

Heart of the Frontier FAQs

What’s the RTP of Heart of the Frontier?

What’s the minimum bet on Heart of the Frontier?

The minimum bet you can place on Heart of the Frontier is £0.20.

What’s the volatility of Heart of the Frontier?

Heart of the Frontier is a medium volatility slot.

Does Heart of the Frontier have free spins?

Yes, Heart of the Frontier has a Showdown Free Games feature which awards 5 bonus spins. It is triggered by having the Sheriff and Bandit wilds on the reels at the same time.

What’s the biggest win available on Heart of the Frontier?

The maximum potential win on Heart of the Frontier is 500x your wager.

Games Similar to Heart of the Frontier

Other Games From Playtech