Jade Shuriken by Slingshot Studios is a 5-reel and 40-payline slot. Stakes range from £0.20 to £20 per spin in the martial arts-themed game. The low volatility Jade Shuriken slot has Re-spins, Free Spins, and more bonus features available. You can play the 96.24% RTP slot here at Wizard Slots online casino.

Real money slot games developer Slingshot Studios is the face behind the 2022 Jade Shuriken slot. It’s a ninja-themed online slot played on 5 reels, 4 rows, and 40 paylines. Playable from as little as £0.20 per spin, you can witness the warriors on all mobile devices.

Bonuses available in Jade Shuriken include; Re-spins, Free Spins, and Cash Prizes. For example, you can win up to 2,500x your stake cash prizes via the Epic Strike prizes. In addition, there are 3 different Free Spins bonus rounds to choose from should you trigger this feature.

You can play this ninja-themed best online casino slots game set to a battle between good and evil here at Wizard Slots. If Jade Shuriken is not to your taste, however, we have an expansive collection of other amazing online slots to choose from!

How To Play Jade Shuriken

Click the hamburger menu for the Bet values to appear. You can choose stakes from £0.20 to £20 per spin.

Click the Spin icon on the middle right to start playing.

Winning combinations in Jade Shuriken occur when 3, 4, or 5 matching symbols land on a payline going from left to right. For example, if 5 high-paying matching green 777 symbols land, they trigger 18.75x your stake.

Special symbols include the game logo wild symbol, the gong scatter symbol, and the green shuriken bonus symbol. Wild symbols can replace the regular symbols and could help complete winning combinations. In addition, they also trigger the highest payouts of 3x, 12.5x, or 62.5x your stake when 3, 4, or 5 land.

Scatter symbols trigger payouts of 1x when 3 scatters land and can land you the Jade Shuriken Free Spins bonus. Green shurikens are the key to triggering the Epic Strike bonus. 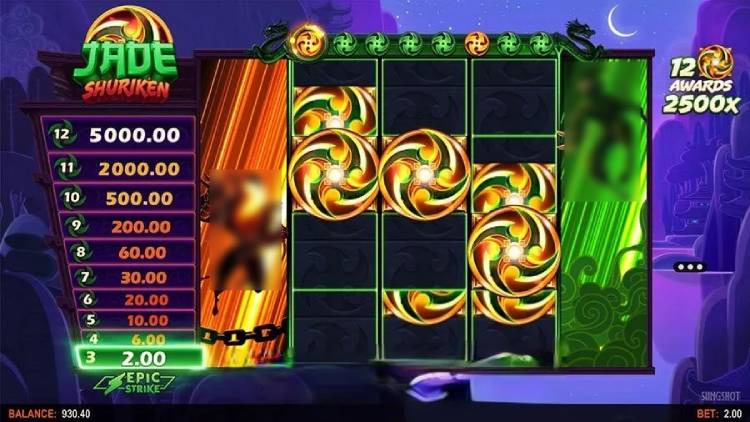 Feature Trail: The Feature Trail running along the top of the reels displays green and gold shurikens. It moves one step towards the left after every spin. So, either a green or golden shuriken can activate. If you trigger a green shuriken, only green shurikens land on the middle 3 reels. In turn, the green shuriken symbols increase your chances of landing the Epic Strike feature. Alternatively, when you trigger a golden shuriken, gold shuriken symbols land on middle reels 2, 3, & 4 increasing your chances of landing the Epic Strike Re-spins.

Free Spins Feature: If 3 scatter symbols land on the middle reels, they win you 1x your stake and launch the Jade Shuriken Free Spins feature. You can choose 1 of 3 Free Spins rounds to play:

Lastly, the win multiplier is triggered after line wins only and doesn’t apply to Epic Strike wins. You can re-trigger the Free Spins bonus feature. 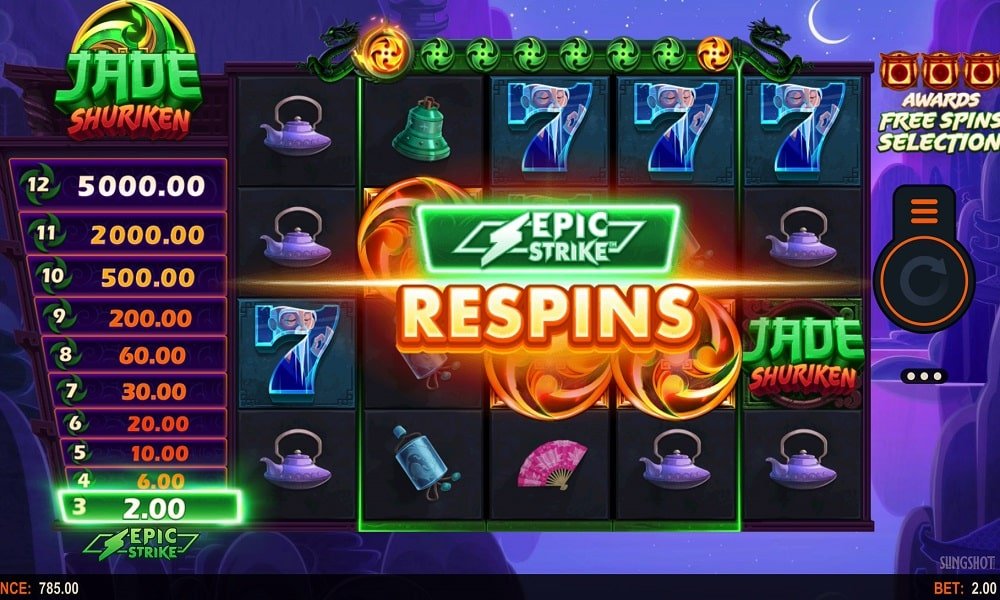 The Jade Shuriken slot theme is one that has been seen before but isn’t over-done. The action occurs at night, with an image of cliffs, pagodas, and a meandering river in the background. We get a gorgeous view of a crescent moon above this purple valley for the setting of this martial arts battle.

Symbols on the black grid include a few Japanese cultural items and classic symbols like triple 7s. For example, there is a blue 7, purple 77s, green 777s, and more. The symbols of focus are the shurikens; the pointy discs warriors throw at each other in battle.

A fast-paced oriental soundtrack plays in the background as you spin the reels. It makes for an exciting element that pairs the action perfectly. 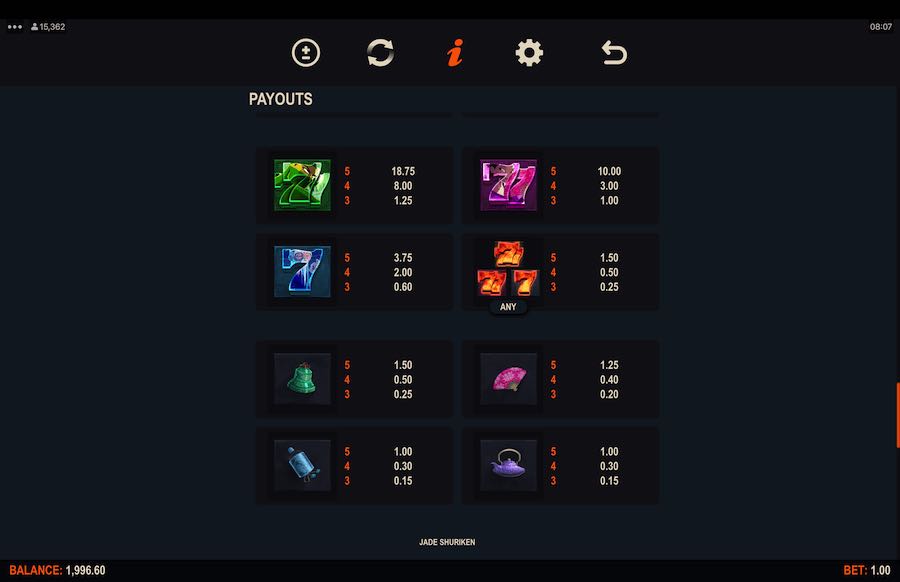 Not many ninja slots capture the culture as eloquently as Slingshot Studios Jade Shuriken slot does. We love the vivid imagery because it brings the story to life. In addition, the backstory engages the player from the start, setting the tone for the slot.

There are also bonus features available aside from a gorgeous theme. The range of Re-spins, Free Spins, and Feature Trail keep gameplay exciting by providing variation, avoiding the slot seeming stale.

If you’re looking for a colourful ninja-themed slot game to add to your list, then your search is over. Log in to Wizard Slots to play the Jade Shuriken slot online.

What is the RTP of Jade Shuriken?

Can you play Jade Shuriken on a mobile phone?

Yes. You can play the Jade Shuriken slot on all smartphones.

Does Jade Shuriken have a free spins feature?

You can trigger the Jade Shuriken Free Spins bonus feature when 3 scatter symbols land simultaneously. There are 3 Free Spins rounds to choose from.

What’s the volatility of Jade Shuriken?

Can you play Jade Shuriken for real money?

Yes, you can play the Jade Shuriken slot for real money at Wizard Slots for a max bet of £20 per spin.