Brought to you by Pragmatic Play, Joker’s Jewels is a classic themed slot with extremely simple gameplay. The colourful gameboard and cheerful music are pleasant additions to this fast-paced base game bonanza. It's good to check out new slots online like this one!

The 5x3 reel setup has 5 pay lines that you can activate at any given point. The unfortunate thing about Joker’s Jewels is that you’ve got no bonus features or even wilds to boost your potential winnings. It’s all on the base game with this one and that’s exactly how it used to be in the old-school gaming days. Enjoy this nostalgic slot today. Find more games by this developer at Wizard Slots.

Pragmatic Play is one of the fastest-growing developers in the online gaming industry. They’ve been making strides in the mobile and desktop markets with high-quality creations. Pragmatic Play was founded in 2015 and in such a small amount of time they’ve managed to compete with market-leading software developers.

Their 100+ team of igaming professionals are credited for their ability to produce silk and graphically pleasing games. Not to mention, Pragmatic Play's ability to place the customer at the forefront of their thinking is second to none, especially when creating new and innovative gaming experiences.

The Siliema based headquarters within the island of Malta is known as an award-winning game studio. The growing competition within the market has only inspired Pragmatic Play to achieve their credited success.

Furthermore, Pragmatic Play was on the periphery of further success at the EGR Operator Awards. In consecutive years the company was shortlisted for Game of the Year, for Hot Safari and Queen of Gold respectively, just falling short of securing the high-status prize.

They have a decent catalogue of different casino games with a solid variety of themes, however, their main focus has always been on online slots. These online slots range from classic designs to visually stunning video slots with high-quality gameplay in all. Pragmatic Play will have a game in their repertoire that appeals to you. Once you’ve given Joker’s Jewels a spin, try out some of their more well-known slots, such as: 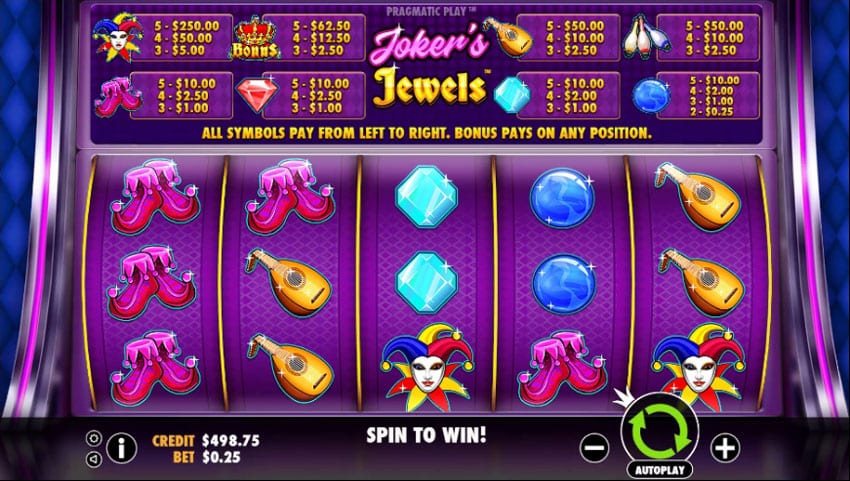 Joker’s Jewels is a 5-reel slot that greets you with upbeat music and a flashy gameboard. You’ll immediately realize the old-school design and simplicity of the game once you start spinning away. The gameboard and paying symbols values are located above the reels to keep you aware of your winnings. The lower valued symbols are blue and turquoise gemstones, red diamonds and jester shoes. If you manage to hit 5 of any of these symbols in a winning combination, then you’ll receive 40x your total stake. Experience why this is among the best-rated online slot games in the UK!

Unfortunately, it’s all on the base game in Joker’s Jewels and there are no bonus features to look out for. Nevertheless, the fast-paced action can still deliver wins that will warrant your time playing this Pragmatic Play slot.

If you were to strip back a slot game into its purest form, it wouldn’t look far off Joker’s Jewels. The game removes any complexities in the shape of complicated mechanics, allowing you to focus on the most important aspects of the game.

Unfortunately, or fortunately, depending on your personal preference there are no crazy bonus Wilds or scatters that activate randomly. As mentioned, it is simply you and the reels, and nothing else, which avoids leaving you feeling puzzled during gameplay.

So, how do you win? Luckily winning is as simple.  All you need the majority of the time is 3 or more matching symbols following 1 of the 5 pay lines from left to right across the reels. Although 5 pay lines seem like it will reduce your chances of winning you couldn’t be more wrong. The lowest payout in the game is only 2 of the pearls, with a winning payout equal to whatever you bet. Anything above wins you 100% profit. 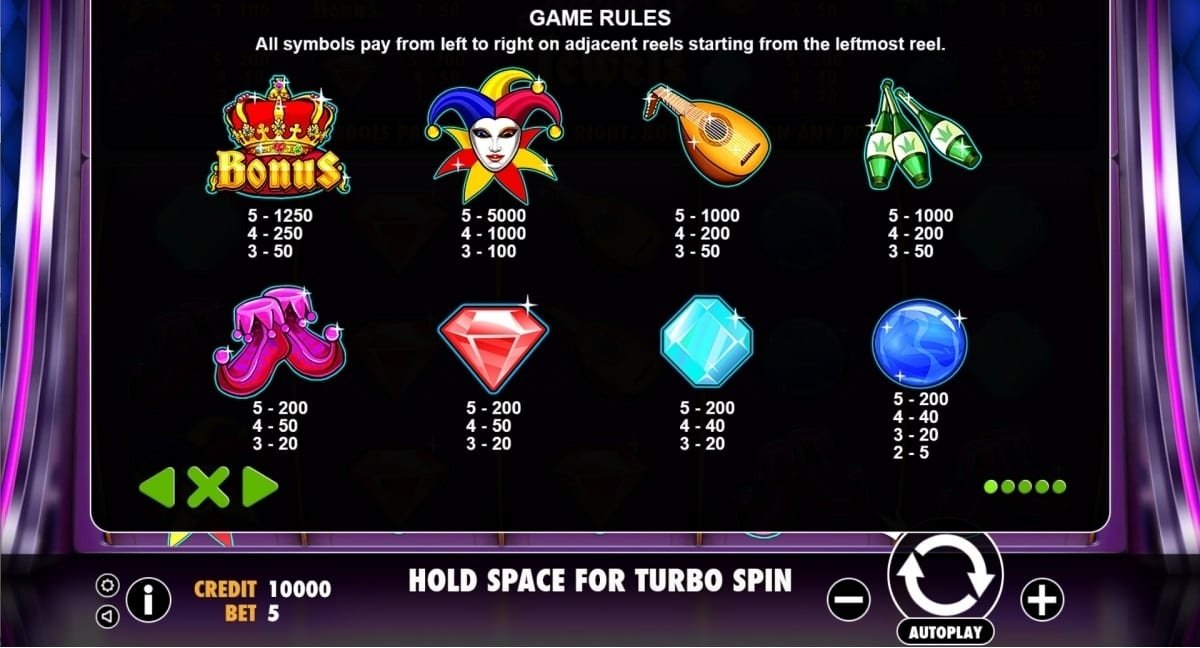 Joker’s Jewels isn’t the most dynamic slot that you’ll ever play, but it serves a specific purpose. The simple gameplay and classic theme allow you to enjoy some autoplay action.

If you’re looking for a game with a wealth of complex bonuses, then Joker’s Jewels isn’t the game for you. Playing a modern online slot without any bonuses or features can be difficult, but It’s still a decent slot with a good base game.

Pragmatic Play wouldn’t put their time into a game that they didn’t think would still appeal to slots players. In conclusion, the stunning animation and design create a refreshing approach to a simplistic slot game, regardless of the low paylines, this doesn’t remove the excitement due to the game’s high likelihood of winning.

Joker’s Jewels is highly recommendable for either a first-time player or someone looking for a game that celebrates the simplicity of slot gaming. Give Joker’s Jewels a spin and see how you like it. If you enjoyed this game you might also like Archangels Salvation.