Keno is a lottery-style online video game with various Return to Player (RTP) rates. The bet range starts from a minimum of £0.01 to a maximum of £300. Since this is a lottery-style game, you get to pick up to 10 numbers before the game starts. The gameplay takes place on a big playboard, marked with numbers from 1 to 80. The potential max win in Keno games is up to £5 million.

The game of Keno has been around since ancient China, making it one of the most exciting and oldest versions of the lottery. It is widely used by national lotteries, casinos and online casinos, which can feature a range of Keno games.

Keno features balls numbered 1 to 80, and players have to choose up to 20 numbers and place a wager on them. If you guessed right and your numbers get picked, you will win the wager amounts you put on them.

When playing online video Keno, you may enjoy a much faster gameplay pace and added features such as bonuses, multipliers, and free games. However, with live play, these extra features are not included.

How To Play Keno

As we've already mentioned, Keno online games are a variation of lottery games for the slot gaming world. They're relatively easy to play and do not need any skill. First, however, you need to learn the rules that apply to whatever Keno game you choose.

Most Keno games will have the "i" icon for information on the gameplay. Use the numbers and arrow button pointing up and down or left and right to place your bet, usually found at the bottom of a game.

Generally, Keno games would have a button with overlapping arrows. When you press that arrow, it will select numbers at random for you. However, some of them might require you to choose the numbers yourself by clicking on them manually.

You have to choose up to 20 numbers from the 80 available. When you are happy with your selection, press the Play button. If your selected balls match the balls the machine randomly picks, they will light up on the game grid.

Then, the paytable next to the ball grid will display your potential payout, calculated by adding your bet against the winning balls.

You do not have to guess all the 20 numbers correctly to form a winning combination. In fact, you can even choose to bet on fewer numbers than 20. For example, some players prefer to play between 5 to 10 numbers.

Moreover, you only need to forecast 9-10 balls correctly for most Keno games to be awarded the jackpot. However, even if you predicted 2 or 3 numbers correctly, you may still get a payout. 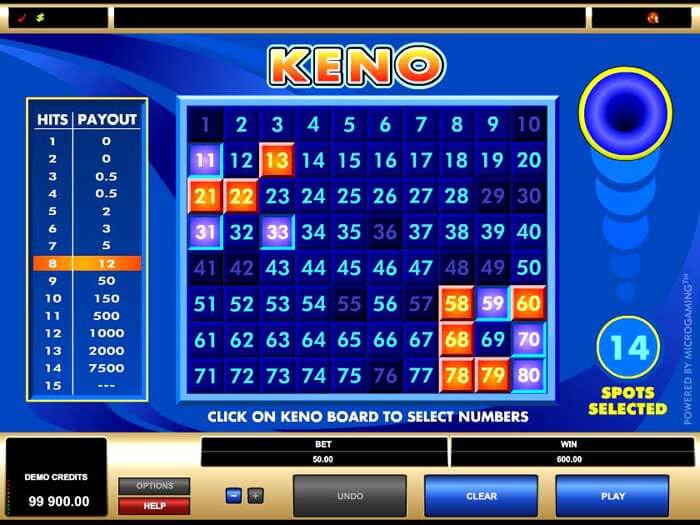 Admittedly, a Keno game doesn't often come with any bonus features. But, some Keno games have adopted similar features to online slots.

Take, for example, the Cleopatra Keno. You'll get a free play bonus in this game if your final number lands on a unique mark in a winning combination. You then get 12 free games in which any winnings are multiplied by 2.

Other Keno games have a variety of wild symbols, where guessing a certain number might award you an additional +1 on top of your stake. Like the Cleopatra Keno, others have various scatter symbols that might reward you with several extra free games.

Unlike online slots, the RTP of Keno games can vary throughout the game. For example, some have RTP values from 70% to 96%. For other Keno games, the RTP increases or decreases depending on the number of balls you bet on.

Usually, the more numbers you bet on, the more the potentially higher RTP rate goes up. However, this is not always the case. Sometimes it works the other way round.

Keno themes, sounds, and graphics vary depending on which Keno game you're playing. For example, the Keno FireFly is a Chinese themed game, playable on a Chinese wooden grid structure with the balls hanging on the frame like a drape.

When you hit play, fireflies fly from the bottom of the hanging balls and bounce around them, landing on the balls chosen at random. The soundtrack is an ancient Chinese tune with distinct drums and flute. And if you land a winning combination, you will hear more modern, upbeat music.

However, if you were to play the Tutan Keno game, you'd notice that it has an Egyptian theme, and the balls are set against an ancient stone slab with a scroll next to it. When you press the Play button, blue beetles will appear from the bottom of the reels and land on any random numbers.

Keno is an exciting twist to the traditional lottery games that most online casinos cannot provide. It is an ancient game of chance that has been modified by new technology and slot game software.

While most Keno games generally do not have bonus features or extras, some do and could potentially make the game that much more enjoyable. Another exciting thing about Keno games is that you do not need to match a specific amount of balls for a potential win. Even 2 or 3 correctly guessed balls could award you instant prizes.

If you want to play a slot game instead, we can recommend the festive Santa Surprise slot here at Wizard Slots.

Can you win real money on Keno games?

Yes. Keno games usually have jackpots that could potentially reach up to £5 million.

What's the minimum bet on Keno?

Do Keno games have free rounds?

Yes. Some Keno games have free rounds that you could trigger under certain circumstances. For example, the Cleopatra Keno could award you up to 12 free games.

Can you play Keno on a mobile phone?

What's the volatility of Keno games?

Keno games have a variety of volatility levels. They could be low, medium or high.

Wizard Slots offer a range of different Keno games. Below you can find some of these.