King Kong Cash is an online slot developed by Blueprint Gaming. Playable on 5 reels, 3 rows and 20 paylines, the King Kong Cash slot has a bet range starting from a minimum of £0.20 to £5 maximum per spin. The maximum potential win is up to 50,000x your stake. The King Kong Cash online slot also has a Return to Player (RTP) rate of 95.80%. The volatility is medium.

The King Kong slot sees you join the mighty King of the Apes, King Kong, as he happily naps in his kingdom. This uk slots game has a grid formation of 5 reels and 3 rows with 20 paylines.

The bets start from a minimum amount of £0.20 per spin, going up to £5 per spin. This online slot is filled to the brim with 5 bonus features and 4 modifiers. These include the Barrel Blast bonus, King Kong Trail Bonus, Empire Free Spins Bonus, Golden Kong Free Spins Bonus, and a Big Monkey Bonus.

Additionally, the King Kong Cash slot has an RTP rate of 95.80%, slightly below casino average, but the medium volatility and the whopping 50,000x maximum win potential might make up for it.

If you want to take this slot for a spin and see what it has to offer for yourself, you can play it here at Wizard Slots using any device, including mobile devices with any operating system.

How To Play King Kong Cash

The Up and Down arrows on your left will help place and adjust your stake as you wish, choosing from a minimum bet of £0.20 per spin to £5 max. The button below the Stake buttons is there to help you access all the information you need about this slot, including the paytable, the game's rules and the paylines.

The same button will also allow you to mute the game if you don't want to play with the soundtrack on.

Once you are happy and satisfied with everything, press the Spin button on the right side of the reels. This slot game has 9 paying symbols, a wild symbol and a scatter symbol.

The game's logo is the highest paying symbol out of the 9 paying symbols. It awards up to 500x your stake for a 5-of-a-kind combination.

The Bonus scatter symbol is the King himself. He triggers the King Kong Bonus feature when 3 or more of him land in a single spin. The money barrel is the wild symbol and can substitute for all the other symbols except the scatter symbol. 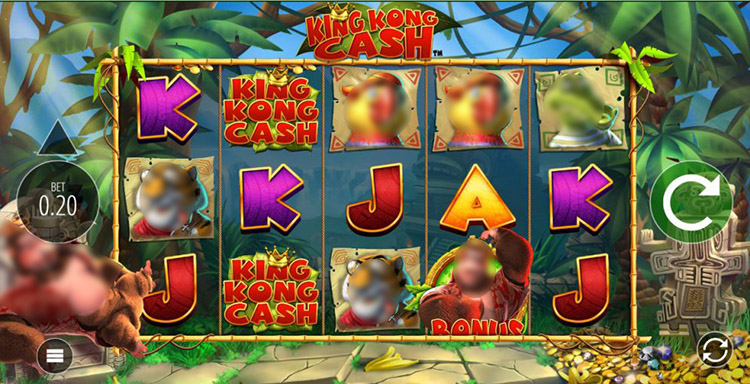 The King Kong Cash slot has 5 bonus features with 4 modifiers. The bonus features are triggered by landing 3 or more scatter symbols. Then you'll be presented with a wheel to spin to determine which bonus feature you land.

If the wheel lands on the Barrel Blast Bonus segments, it will present you with several barrels. Choose up to 3 barrels; if you match 3 items, you receive multipliers. If you reveal 3 golden monkeys, you will advance to the Big Monkey Bonus.

Here, you'll find the snowballing cash trail, which lets you collect prizes while you go. You will be presented with a mini bonus screen with 2 stages. First, you must go up a multiplier trail by picking barrels to help you advance to the next course. The barrels will either help you advance from 1 to 5 stages, send you directly to the Big Monkey Bonus, or reveal a bomb that will end the feature.

If the King Kong Trail transports you to the Big Monkey Bonus feature, you'll find Kong in the middle, surrounded by barrels and bananas. The barrels will start spinning, and whatever multiplier they land on will be applied to any winnings. And then you'll have to select a banana which will either reveal a golden monkey to respin the barrels or a bomb which will end the feature.

The Empire Free Spins occur on a different set of reels on the Empire State building. You receive bonus spins and play them out on the bottom level of the building. If you manage to collect Golden Monkeys, then the giant ape will scale the empire state building to the next level and next set of reels. With each level, the reels are an upgrade on the previous with rising multipliers. With each climb, you also receive additional spins. The further you climb, the larger the upgrade.

You'll also find the Golden Kong Free Spins feature on the wheel. This will take you to a new set of 5 reels and 4 rows with 40 paylines, and you will receive a fixed number of bonus spins. Every time you land a wild symbol during this round, the meter on the side of the reels will increase by an amount that corresponds to the number of wilds landed.

Once you reach the end of your bonus spins, you receive a number of ‘wild spins’ in which, for each spin, the number of accumulated wilds will be randomly placed on the reels. Following the wild spins, you get to pick a barrel from the 3 presented. If the barrel reveals a golden donkey, the reels will spin again with the wilds shuffled in random positions. But, if you reveal the bomb, the feature ends.

These features can appear at any point during the base game at random. There are 4 of these modifiers, including:

To begin a new round or end the current one, select one of the 3 barrels above the reels. What the barrels reveal will determine the outcome. 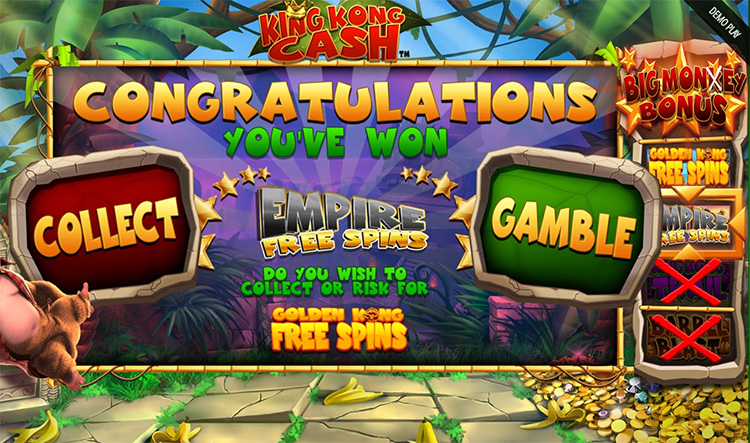 The King Kong Cash slot has an RTP rate of 95.80%, and the volatility is medium.

The King Kong Cash online slot is set in the exotic island home to the King of the Apes, Kong. The reels are nestled between lush jungle trees, and they are semi-transparent so that you can see the mysterious temple-like structures behind them.

On the left side of the reels, King Kong is napping soundly, occasionally waking up to trigger one of the random modifiers. Additionally, the reels have brightly coloured A-J card royals and 4 other animals; the rhino, a tiger, a crocodile, and a parrot.

The soundtrack is nothing to write home about. Instead, Blueprint Gaming kept it to a simple, tribal drumming sound that stops when the reels stop. 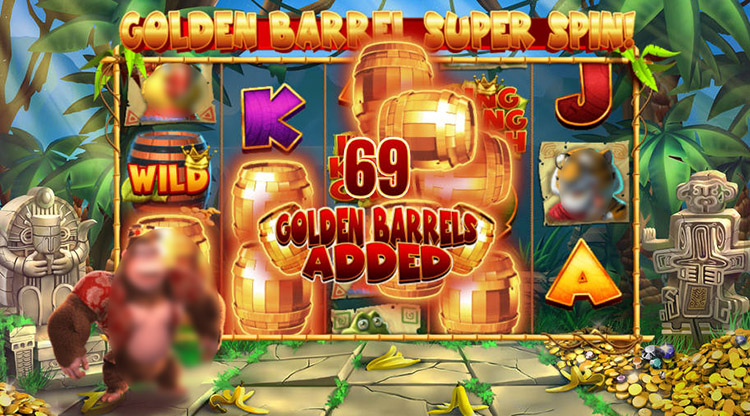 The King Kong Cash slot is well-designed with plenty of bonus features and modifiers. The King of the Apes may take you through a maze of exciting features that could potentially award you up to 50,000x your stake.

You can play this slot on any device, including mobile devices that support HTLM5 software. King Kong Cash is available to play online here at Wizard Slots; there’s also a vast collection of other online slots you can browse.

Can you play the King Kong Cash slot on a mobile phone?

Yes, you can play the King Kong Cash slot on a mobile phone that supports games built with HTML5 software.

Can I win real money on the King Kong Cash Slot?

Yes, the King Kong Cash slot is a real money slot, meaning you can bet and potentially win real money.

What is the RTP of King Kong Cash?

What is the biggest win available on King Kong Cash?

Does the King Kong Cash slot have free spins?