Kings of Chicago was a 5 reel and 5 payline slot by NetEnt. Stakes ranged from 5p to £50 per spin. The maximum potential win in Kings of Chicago was worth up to 13,000x your stake. It had a 97.8% RTP and high volatility, but casino slots developer NetEnt discontinued the game in 2019.

NetEnt debuted its Kings of Chicago slot in 2011 but later discontinued it in 2019. It was a 5 reel, 3 row, and 5 payline slot with a retro card theme. Players could enter the underground world of speakeasy bars and backdoors where Chicago gangsters played poker.

Playable from as little as 5p per spin, you could potentially trigger a Free Deals bonus with up to 30 free games on your 1st trigger. In addition, a 2x multiplier could be applied to any winning deals in the feature.

You could play this slot on the best casino slot games sites in the UK, like Wizard Slots.

How To Play Kings of Chicago

You could set your wagers using the Coin Value buttons on the right.

Players could use the Spin button in the middle to start the game.

Special symbols included a joker wild symbol. If a joker completed a winning combination, it doubled the payout. There was no scatter symbol, but scatter labels could wrap around the symbols on a random deal. 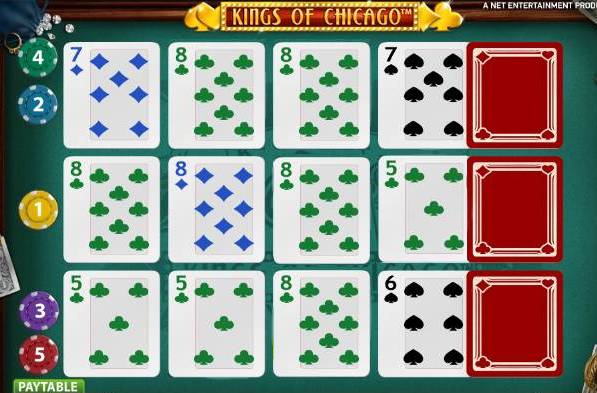 Free Deals feature: If 3, 4, or 5 scatter labels landed simultaneously, they triggered 3x, 10x, or up to 100x your stake payouts. In addition, the scatters could also win you 10, 15, or 30 free deals, where winning deals activated a 2x multiplier. The 2x multiplier could also combine with the doubling wild, which could potentially lead to quadruple payouts. Lastly, up to 60 free deals were available, so the feature allowed for 1 possible re-trigger. 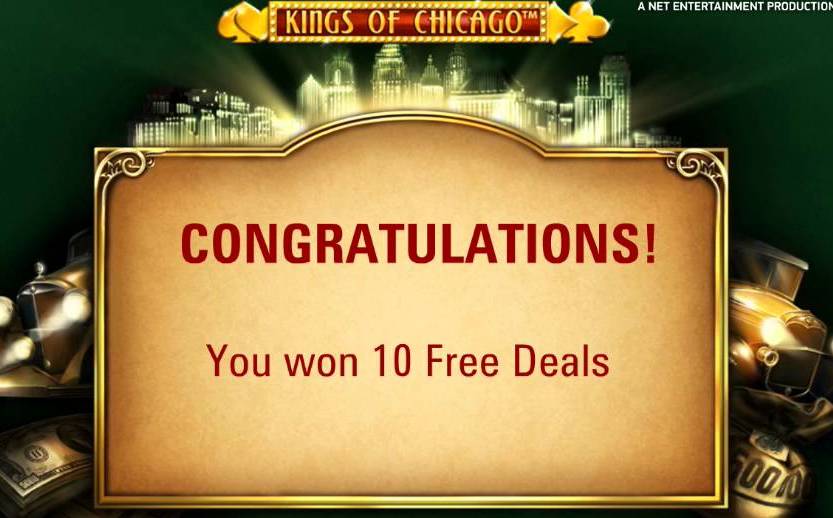 The Kings of Chicago slot theme occurred in 1920s Chicago. So, you could see pin-striped mob bosses as symbols on the reels. A maroon poker table, bow ties, and cash clips appeared in the background.

So, the main symbols included different hands of video poker. Of course, there were also other symbols like cops, gangsters, bosses, and molls. Some of the winning poker hands you could land included a straight, full house, flush, straight flush, a royal flush including a joker, and a natural royal flush with no jokers. The latter triggered the highest payout, where 5 could land you up to 2,000x your stake.

A gentle soundtrack played in the background during your deals. However, the sound of cards shuffling overpowered any other music playing.

Kings of Chicago was an elegant portrayal of the Chicago gangster scene. We love the twist NetEnt added with the winning cards. Every element of the game stayed true to the poker theme.

For example, winning deals replaced the term ‘winning spins’. And, you had a Free Deals feature that mimicked the Free Spins feature. It offered up to 60 free deals in total.

Kings of Chicago didn’t have many extras, but it had a generous maximum potential win. You could trigger up to 13,000x your stake on each free deal. The game served many audiences well, as it was one of the most creative video poker and online slot combos.

What was the minimum bet on Kings of Chicago?

Minimum bets in Kings of Chicago started from 5p.

What was the RTP of Kings of Chicago?

Could you play Kings of Chicago on a mobile phone?

No. The Kings of Chicago slot was not compatible with all smartphones.

Did the Kings of Chicago slot have a free spins feature?

Kings of Chicago had a Free Deals feature with up to 60 free deals available.

What was the volatility of Kings of Chicago?

Kings of Chicago was a highly volatile slot.

Could you play Kings of Chicago for real money?

Kings of Chicago was available to play for real money online. However, it was discontinued in 2019.

Games Similar to Kings of Chicago

Unfortunately, this game is currently not available on Wizard Slots.