Who is your Lucky Valentine this year? It might be you if you spin the wheels right.

Lucky Valentine is a 5 reel, 20 payline Red Tiger Gaming online slots UK. Features in the game include; 20x multipliers, random wild symbols, mega 3x3 wilds, high value symbols, free spins and a Tower Bonus that can offer players multiplier values of up to 800x. Some of the unique features include; the Cupid's Reels feature where a tornado randomly blows on to the reels and sucks up all low value symbols on the reels. In the Love Multiplier feature, Cupid appears on the reels and sticks on to what looks like a bin.

He nudges the bin thus releasing multiplier extras. The more nudges Cupid has, the higher the multiplier values go. Multipliers of up to 20x can be awarded. - 3 heart symbols can appear on the odd numbered reels 1, 3 and 5 on one spin to activate the Free Spins feature. Pick 1 of the 3 triggering hearts to unveil the number of symbols awarded. Stakes in this promotion slots start from 20p on a single spin.

About the Lucky Valentine Casino Game

Players better get ready to take a virtual romantic break to one of Europe's most visited countries; Paris. Lucky Valentine has a nice cartoon design. The game is not overloaded with mushy romantic stuff. The Eiffel Tower lies in the background with symbols on the reels including playing card symbols A to 10, ice cream, a bottle of champagne, a teddy bear, a Valentine's card and his and hers phones. The Valentine's card is the highest paying symbol in the game. When 5 Valentine's cards appear on a payline, players will receive up to 16x their total bet.

The bonus scatter joins the range of usual symbols which include a wild that can substitute all other symbols in the game. When 5 appear on a payline, players will receive up to 20x their total bet (or an equivalent of 400 coins). There are plenty of extras offered in Lucky Valentine with a few of the randomly triggered features including;

The 2 bonus features in the game can be activated when specific symbols appear on the reels as follows; 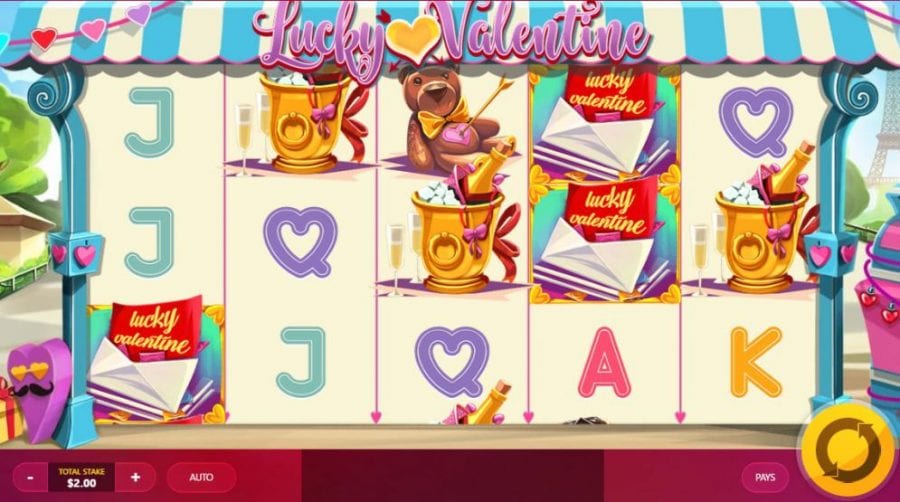 About Red Tiger Gaming the Developer of Lucky Valentine

The company has its main headquarters in the Isle of Man. They have licenses issued by gambling commissions in the UK and Isle of Man. The previous is one of the toughest when it comes to game inspection.

Red Tiger slot games are available in online casinos across the globe. Many Red Tiger casino games are played as high stakes games with them mostly targeting VIPs or high rollers. The great thing is that they also tend to be high action games that include engaging gameplay.

RTG claims that they have already mastered player psychology when it comes to game development. Their games usually consist of amazing graphics, unique bonus features, cross-platform compatibility with tablet, desktop, mobile and TV on iOS and Android. Check out these slot games:

As you can see, they tend to experiment with themes like adventure, action, humour, love, mystery, horror, etc. You can find more of their online slot best games at here at Wizard Slots. 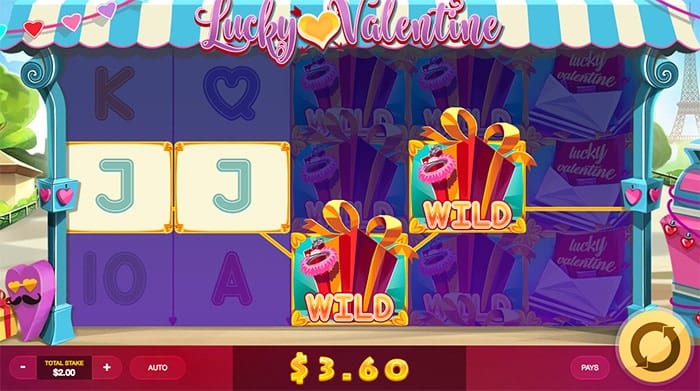 The Verdict of the Lucky Valentine Video Slot

Lucky Valentine by Red Tiger Gaming is a perfect slot for both beginner slot players and professionals. The nice design paired with the unique bonus features make this one of Red Tiger’s must play slots. Punters will definitely enjoy benefitting from the randomly triggered bonus extras that occur often in the main game.

These can give your bankroll a much needed boost when you least expect it. If you’re looking for a good lovey dovey slot to get you in the perfect mood for Valentine’s day, then this is it. Make sure you look for Lucky Valentine by Red Tiger Gaming at Wizard Slots, where you can find other top games such as the amazing Fruit Collector Slot.