Monopoly Megaways by Big Time Gaming is a 6-reel slot with up to 117,649 ways to win. Stakes range from £0.20 to £5 per spin on every mobile device. Bonus features in the highly volatile slot include Free Spins, Multipliers, and more. Register at best online casino slots site Wizard Slots to play the 96.5% RTP Monopoly Megaways slot online.

Online slots developer Big Time Gaming launched Monopoly Megaways in 2019. It’s an online slot played on 6 reels and 2 to 7 rows, with up to 117,649 ways to win. Playable for minimum stakes of £0.20 per spin, the game is accessible on every mobile device.

Bonus features in Monopoly Megaways include; Free Spins, an Unlimited Win Multiplier, and a potential max win of up to 12,500x your stake.

The best part about the game is seeing a section of the traditional Hasbro board game below the reels. It adds a fun twist for fans of the original classic Monopoly game. You can play the online Monopoly Megaways slot and many other slot machines right here at Wizard Slots.

How To Play Monopoly Megaways

Use the Stake buttons towards the top right to increase and decrease your bet values to an amount you’re comfortable betting.

Each reel can have 2 to 7 symbols on each spin. As a result, the more symbols per reel, the more Megaways you have.

Reel Adventure feature: You can upgrade the game via this feature which sees Mr Monopoly move across the Monopoly board. He can unlock different prizes depending on where he lands. For example;

Free Spins feature: You can trigger the Monopoly Megaways feature when you land a 5th House on a property or land on Chance. The feature rewards you 8 Free Spins with each extra House after the 5th earning you an extra spin. In addition, each train station you own also wins you an extra spin.

You win 3 extra spins every time you land the Free Spins feature again.

Unlimited Win Multiplier feature: You can also win a 1x multiplier that increases by 1 after you own a new utility. In addition, every House on each property you land on increases the multiplier value by 1. You lose all your train stations and utilities when the feature ends. 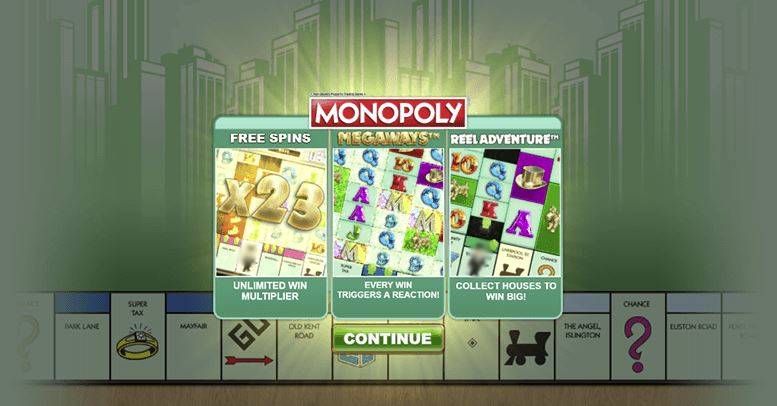 The Monopoly Megaways game theme looks fantastic on every mobile device. Hues of soft green in the design with a city skyline background give players a nostalgic feel. In addition, you can spot a few of the original Monopoly tokens on the reels.

Fast-paced jazz music plays in the background adding an electrifying feeling to each spin. It complements the theme perfectly.

Big Time Gaming did the classic Hasbro game justice with the Monopoly Megaways slot release. The theme honours the memory of the early edition with the soft green aesthetic. In addition, seeing the original tokens from the game presented in 3D gives the slot an even closer tie to the original board game.

Monopoly Megaways also has a range of exciting bonuses available. The Reel Adventure bonus perfectly pays homage to the theme, travelling across the board with each spin. We also liked the inclusion of a 5th House trigger for the Free Spins round.

Overall, this is one of the most memorable slot games you’ll come across. It’s likely to appeal to both avid fans of the classic Monopoly board game and those just looking for a new online slot to play.

See if you agree, you can give the Monopoly Megaways slot a go at Wizard Slots for as little as £0.20 per spin.

What is the RTP of Monopoly Megaways?

Can you play Monopoly Megaways on a mobile phone?

Yes, the Monopoly Megaways slot is compatible with all smartphones.

Does Monopoly Megaways have a free spins feature?

You can win 8 Free Spins on Monopoly Megaways when you land a 5th House on a property. The Free Spins feature may also be triggered if you land on Chance.

What’s the volatility of Monopoly Megaways?

Monopoly Megaways is a high-volatility slot.

Can you play Monopoly Megaways for real money?

Yes, you can play the Monopoly Megaways slot for real money at Wizard Slots for a max bet of £5 per spin.