Developer Barcrest has always had a knack of creating well-tuned online slot games that appeal to the masses, juts look at Rainbow Riches is you ever wanted to see real evidence of that.

Rainbow Riches defined their catalogue almost, setting itself apart from the other Irish-themed waffle there is out right now, well, did you know there is a megaways version? A version that promises bigger wins on a much grander scale if you can believe that!

Unlike the previous version, Rainbow Riches Megaways boasts 6 reels by 117,649 paylines for punters to spin around in! Barcrest doesn’t do half measures, meaning they are known to have that go big or go home mentality that can be felt across various titles.

Punters will be able to spin here in Rainbow Riches Megaways from as little as 20p a spin up to £20, so there are many ways to approach this one. Be sure to check out the rest of the review down below to learn more about this one and other uk online slots!

About the Developer of the Rainbow Riches Megaways Casino Game: Barcrest

Founded in 1968, Manc developer Barcrest currently stands as one of the oldest names in the game right now, a name that is respected by their peers and audiences alike! These guys have seen it all and practically done it all since opening their doors for the first time — bet they have some of the best slot games developers' stories to share! They say that no matter where you go, you’ll always find a Barcrest slot near you — most of their games are mobile-optimised to be fair…

These guys have treated us to many eventful evenings in the past courtesy of their slot machines, and we’re pretty sure the same can be said from a lot of other people out there. Did you know that Barcrest has well over a hundred slots waiting for you to experience right now in their stacked catalogue? If you enjoyed Rainbow Riches Megaways and want to keep that money train chugging along, then definitely look at these games: 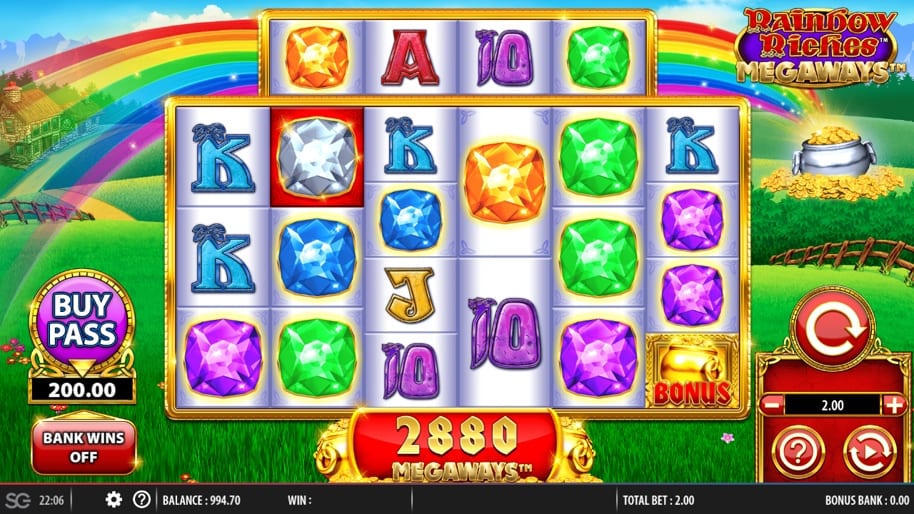 We’ve said it once, and we’re going to say it again, Rainbow Riches slot is one of the finest Irish slots we’ve ever come across, a slot that will no doubt go down in slot history as a pioneer to many other slots out right now!

It’s clear that Barcrest knew of the power of this slot given how they went and made a Megaways version, but most Megaways versions don’t live up to the hype promised, is this the case with Rainbow Riches Megaways? Let’s find out, shall we!

Let’s begin by talking about the look and feel of the game. Rainbow Riches Megaways is identical to the original Rainbow Riches in appearance — apart from the fact that there is an additional reel here and plenty of bonus paylines.

The use of incredibly bright and bold colours help create a really positive environment for punters to play around in, using light blues and golds primarily. If you look off in the background you’ll see a very trippy rainbow too — it’s a detailed game with plenty to see and do let’s leave it at that.

Since this is an Irish themed game, one should expect to see all your favourite trinkets on the reels here, each offering something different as far as scores go and whatnot! Symbols here in Rainbow Riches Megaways include leprechauns, pots of gold and much, much more! 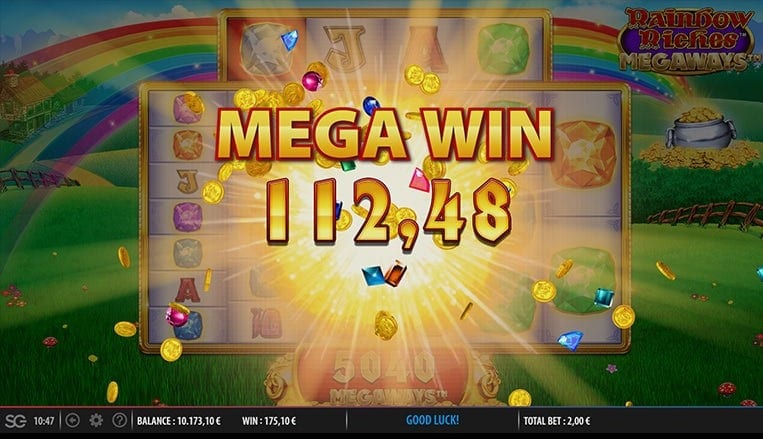 If you care about the money you’re making here in Rainbow Riches Megaways, then you will definitely want to be taking advantage of the wild horseshoes. Matching wild symbols will cause the entire board to shift about, substituting various symbols for scatters almost instantly. Wilds are the most common of all bonus symbols and are incredibly easy to spot when compared to some of the other symbols, so no excuses.

One of the main reasons why we were so drawn to Rainbow Riches Megaways was due to the cascading wins feature! Whenever you trigger a win here in the game you will find that symbols are removed and replaced instantly — occasionally the symbols that fill those empty spots will form wins of their own, if that happens, you will trigger yet another win, this can roll on over multiple minutes in some cases. Think of this feature as knocking down one domino and watching as a ripple effect kicks into action.

Yet another great feature is the super gem bonus. To trigger this feature all you need to do is match the super gem symbol, do that, and all visible gem symbols on the reels will transform into the same icon thus forming a gigantic win for you! Those of you playing on higher bet amounts will definitely find this bonus to be incredibly helpful — we still play Rainbow Riches Megaways after this review and find it’s the best way of coming out with a big win quite quickly. 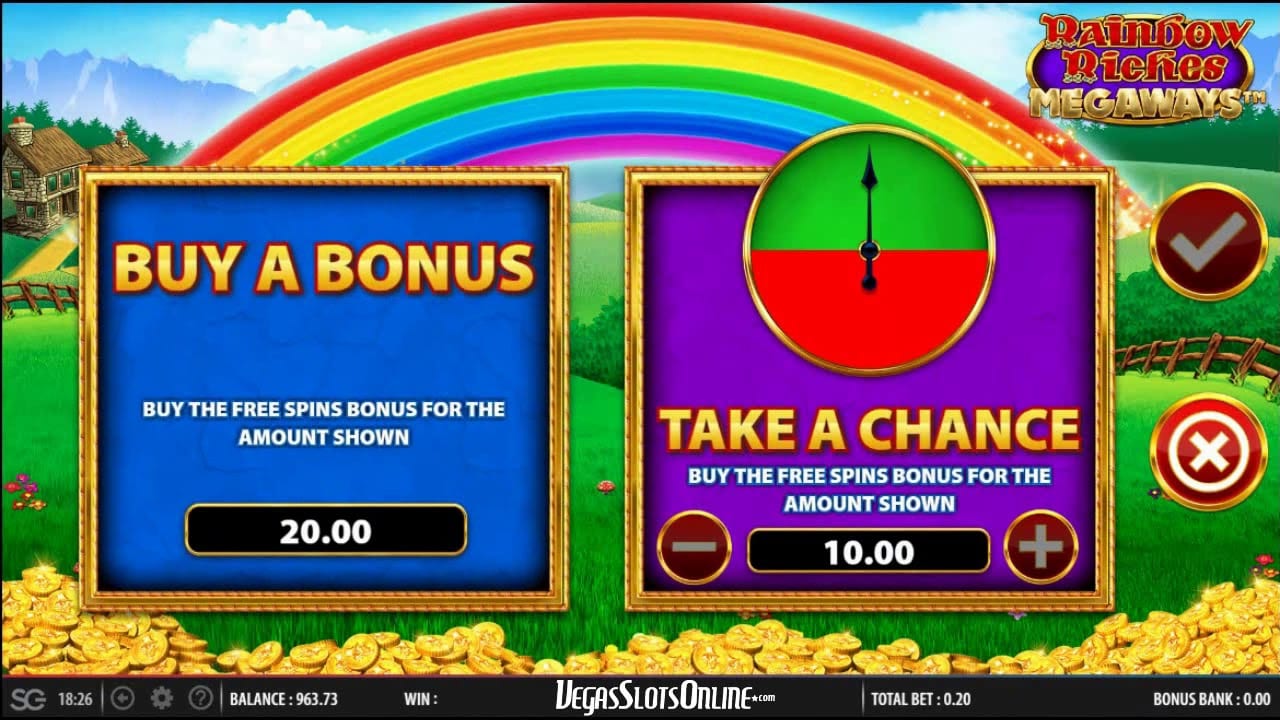 Rainbow Riches Megaways is not your typical megaways version of a hit slot, there are various tweaks made here to make your experience here a lengthy one! We consider Rainbow Riches one of the best Irish-themed slots in the world right now, so we were always going to play the Megaways version regardless, thankfully it more than does enough to earn your time and your money, play now! If you'd like to try some other Rainbow Riches slots, why not try the Rainbow Riches Pots of Gold slot.