Rocket Reels is a 7-reel and 7-row slot from Hacksaw Gaming. This exciting online slot has a space theme with reels covered in brightly coloured planets and meteoroids. Experience out of this world features, including a UFO feature that triggers randomly and a free spins feature that can reward up to 75x your bet. An epic 10,000x your bet is the top potential prize in the Rocket Reels slot.

To infinity and beyond! Explore the depths of the universe in Rocket Reels. Rocket Reels is a casino online slot with a space theme played on 7-reels and 7-rows. The graphics look incredible, with multi-coloured planets, asteroids, and spaceships filling the reels.

There are some entertaining bonus features in Rocket Reels. First up, there’s a UFO bonus feature which is randomly triggered. At any point, a UFO can land on the reels, wipe out symbols and replace them with new ones.

There’s also a free spins feature! The rocket will drop multipliers on the reels of up to 75x your stake during this feature. With every spin in the Rocket Reels casino slot game, there is a chance to win a potential top prize of 10,000x your bet.

How To Play Rocket Reels

Before you play Rocket Reels, adjust your bet using up and down arrows next to the Spin button. Betting ranges start from 20p to £5. Familiarise yourself with the paytable, and then, you’re good to go and hit Spin.

Rocket Reels is played on a 7x7 grid and uses a Cluster Pays mechanism. This means wins are created when you land a cluster of 5 or more matching symbols. When a win is formed, the symbols that made the win will drop, and new ones will fall into place.

The wild replaces all other symbols apart from the free spins symbol. Several rockets can be launched with every spin, potentially resulting in multiple wins. Drops will reoccur until no new winning clusters can be made. There are 2 bonus features in Rocket Reels: the UFO bonus feature and the free spins feature. 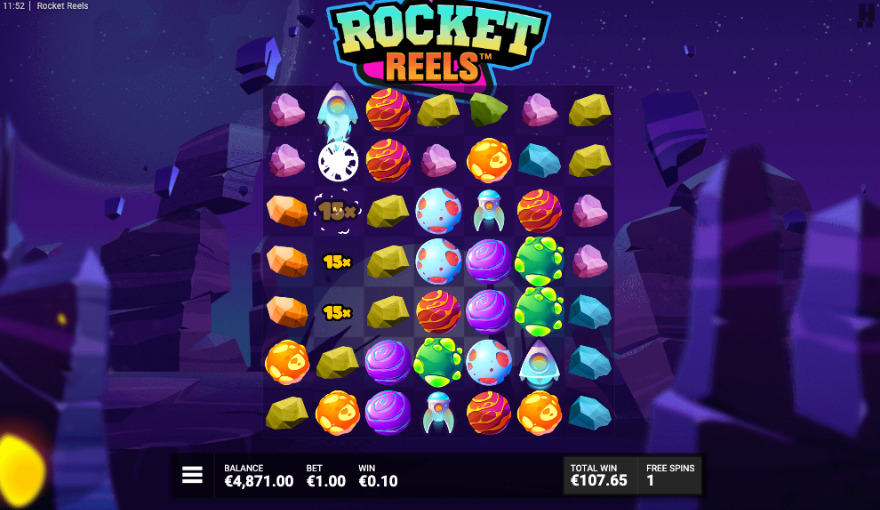 Wild Symbol: The wild symbol replaces all other standard symbols to form potentially winning combinations. It only appears in the free spins round.

Other Symbols: Rocket Reels has a variety of space-themed symbols, all of which come with different rewards when part of a cluster win.

UFO Bonus Feature: The UFO bonus feature can activate randomly on spins where rockets have been launched. When it does, a UFO will fly onto the reels and beam up a random number. These symbols will disappear and will be replaced with new ones, giving you another chance to win.

Free Spins Feature: Activate the free spins feature by landing 3 or more free spins symbols. You will then be granted 8 free spins. Rockets will then launch onto the reel, dropping multipliers of up to 75x. 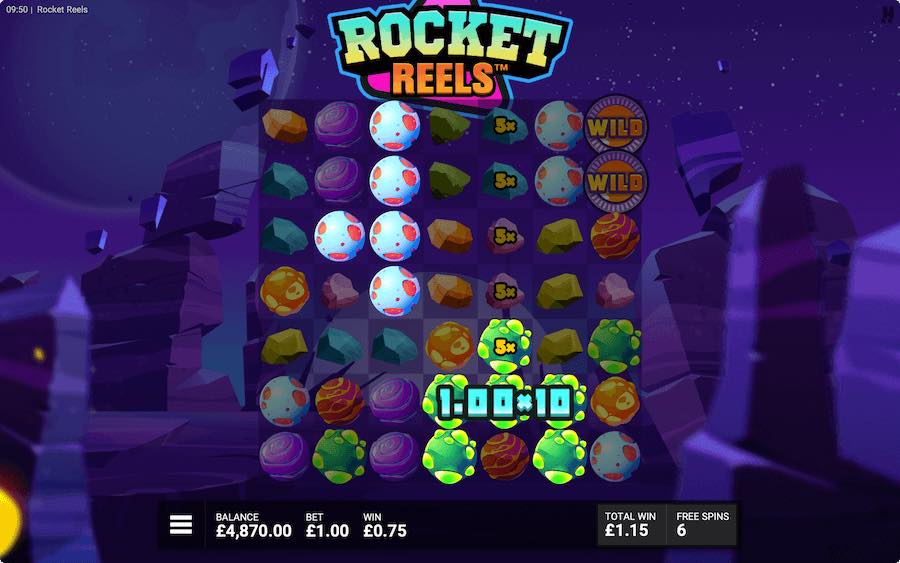 Rocket Reels has an RTP of 96.3% and has high volatility.

Rocket Reels has a space theme. As you play, you’ll hear an upbeat space pop track. The reels are set in outer space, on a planet with tall purple rocks, surrounded by a starry sky. Filling the reels are a variety of colourful planets and space rocks. 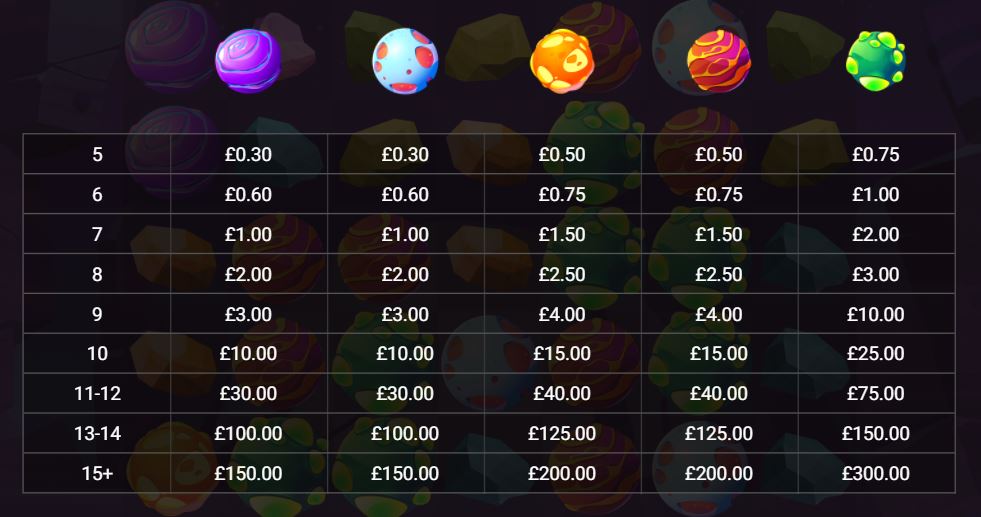 Rocket Reels is a fun space-themed slot. The design is so much fun, with lots of planets covering the reels. The addition of Cluster Pays adds another exciting element to the game, with clusters of 15+ green planets offering you a prize of 300x your bet!

There are some great features in Rocket Reels. The UFO bonus feature can be a nice surprise and can give you another chance at forming a winning cluster. The free spins feature is awesome too, as multipliers of up to 75x your bet can drop onto the reels, and free spins can be awarded. An incredible prize of up to 10,000x your wager is the top potential prize available.

What is the RTP of the Rocket Reels Slot?

What is the minimum bet on Rocket Reels?

The minimum bet on Rocket Reels is 20p.

What is the maximum win available on Rocket Reels?

Rocket Reels has a maximum potential win of 10,000x your bet.

Does Rocket Reels have any bonus features?

Other Games From Hacksaw Gaming

If you enjoyed Rocket Reels, you might also enjoy other slots by Hacksaw Gaming.

And there are so many more, so check out our video slots games today!