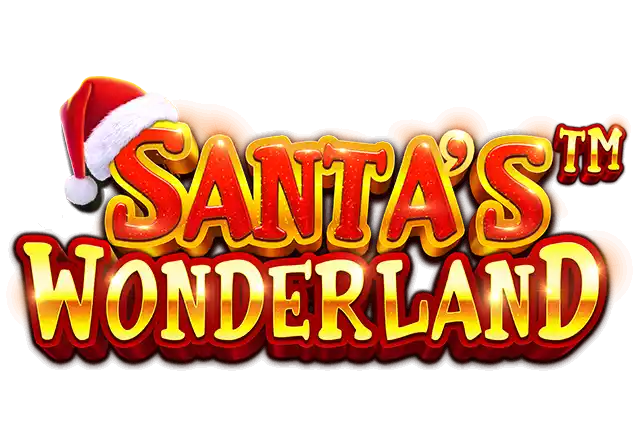 Santa’s Wonderland is a magical, cosy Christmas slot by Pragmatic Play, with cluster pays. Santa’s Wonderland has a festive theme with a colourful design. It offers some fun features, including power-ups where different coloured snowflakes can land on the reels and potentially expand symbols or add wilds. There’s also a midnight riches bonus that has 5 exciting levels. Best of all is the top potential prize of 7,500x your total bet.

The graphics are very festive, with old-school toys and baubles covering the reels. Of course, there’s a cheery Christmas soundtrack to listen to as you play. If you’re not in the mood for Christmas yet, you may be after playing this slot.

Santa’s Wonderland slot has some fantastic bonus features. First up, there are “power-ups”. Each coloured snowflake has superpowers that can be unleashed. For example, the red snowflake can randomly increase symbol sizes to 3x3, 4x4, or 5x5 for a possible bigger win.

Additionally, there’s a midnight riches bonus feature with 5 levels. Reaching the top level would see you win up to 15x your bet. The biggest possible win with every spin is an incredible 7,500x your stake.

How To Play Santa’s Wonderland

Santa’s Wonderland is a cluster pays slot that’s played on an 8x8 grid. Begin your game by selecting your wager from 20p to £4. Then, press the large Spin button to begin spinning the reels.

Landing 5 or more matching symbols, either vertically or horizontally, will form a cluster win. The most rewarding symbol is the teddy bear. Landing a cluster of 25-64 teddy bears will reward you with up to 500x your bet.

The wild symbol is Santa, and he can replace all other standard symbols. You may also notice different coloured snowflakes may appear on some reels, and each of these has its own special power.

There are 2 bonus features that you can unlock in Santa’s Wonderland. One of these is the midnight riches bonus feature, which has 5 levels where you have to collect points and fill up the meter in order to unlock different levels. If you completely fill up the meter, you’ll be awarded a 15x multiplier.

The top potential prize up for grabs in Santa’s Wonderland is a jolly 7,500x your bet. 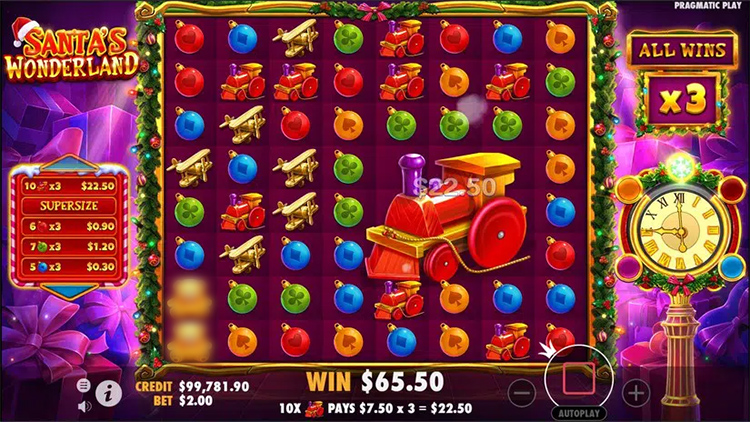 Wild Symbol: The wild symbol is Santa Claus. He replaces all symbols and only appears in the wild Santa and lucky Santa features.

Tumble Feature: Wins are formed by landing clusters of 5 or more matching symbols. When there’s a win, the symbols that made the win will disappear, and the remaining symbols will fall to the bottom. New symbols will then fill up the empty spaces. The tumble feature will continue until no more wins can be made.

Power-Ups: There are 5 different coloured snowflakes that can appear behind symbols during the base game. Each one triggers its own special feature:

Midnight Riches Feature: With every winning spin, a number of symbols will explode. These will then be added to the midnight riches meter. There are 5 levels in total, with level 5 being the top level, where you can potentially win a 15x multiplier if you manage to collect 132 winning symbols.

Santa’s Wonderland has an RTP of 96.23% and has high volatility. 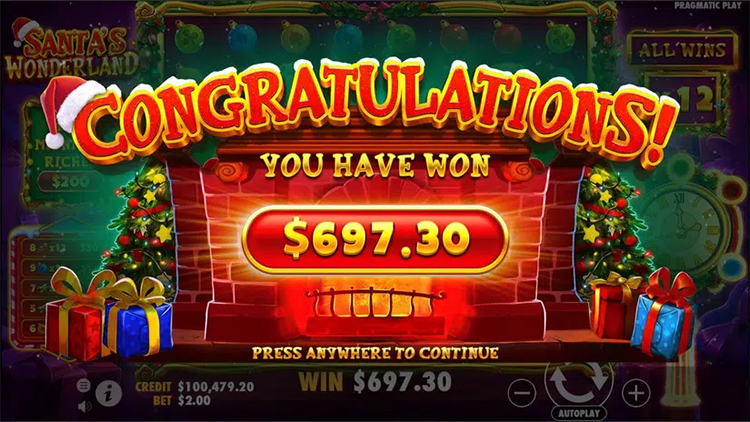 Santa’s Wonderland has a jolly Christmas theme. It has very traditional Christmas graphics that are a joy to see and may bring back some Christmas nostalgia.

The design is delightful and magical, with the reels set inside what appears to be Santa’s workshop. Symbols include baubles, various old-school toys and even Santa himself!

Santa’s Wonderland is a wonderful online slot. The Christmas theme is fun if you like Christmas, of course! The graphics are magical, and the features are quite entertaining.

There are great opportunities to potentially activate one of the power-up features with extra wilds or mega symbols.

Santa’s Wonderland also has a huge top potential prize of 7,500x your wager!

What is the RTP of Santa’s Wonderland?

What is the minimum bet on Santa’s Wonderland?

The minimum bet you can make is 20p.

What is the maximum win available on Santa’s Wonderland?

Santa’s Wonderland has a maximum potential win of 7,500x your bet.

Does Santa’s Wonderland have any bonus features?

Yes. There are 3 bonus features in Santa’s Wonderland.

Other Games From Pragmatic Play

If you enjoyed Santa’s Wonderland, you might also enjoy other slots by Pragmatic Play.