Slingo Deal or No Deal 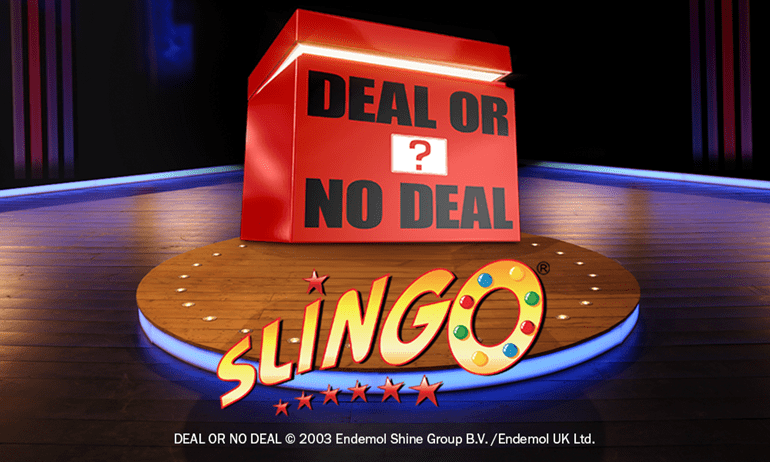 Anyone in the UK in the 2000s will be familiar with the hit game show Deal or No Deal. Hosted by the familiar face of Noel Edmonds, this TV program had all of the tension and excitement you could want, but does the Slingo slots casino version offer the same characteristics?

For those of you who don’t know, Slingo is a mix between bingo games and slots, hence the name. The series offers a wide range of games based on all areas of pop culture, and one of the latest pieces on that list is Deal or No Deal.

Slingo Deal or No Deal is probably one of the better games of the series. The RTP is slightly higher than others (although it’s still low by slots standards, coming in at 95%), there is a higher max win of £100,000, and it’s certainly a bit more exciting all around.

However, Slingo is a bit like marmite: you either love it or you hate it. There’s only one way to find out: play the Slingo Deal or No Deal slot right now at Wizard Slots. But make sure you check out our casino games review first.

Because Slingo Deal or No Deal is one of the later games in the Slingo saga, it has some of the best graphics. But it’s not like there was ever a problem before, as the Slingo attention to detail is pretty good.

Those who have seen the gameshow will be familiar with all of the red boxes, and in fact the whole experience is very similar to the show itself. This is comforting and enjoyable, and Slingo have executed it in style.

By the way, if you want to play Slingo Deal or No Deal mobile then you’ll have no problem in doing that other than the fact that there is a lot of detail on the screen at one time, so you may need a reasonably sized phone screen!

Here are some other Slingo games you may wish to try out if you find yourself falling in love with Slingo Deal or No Deal: 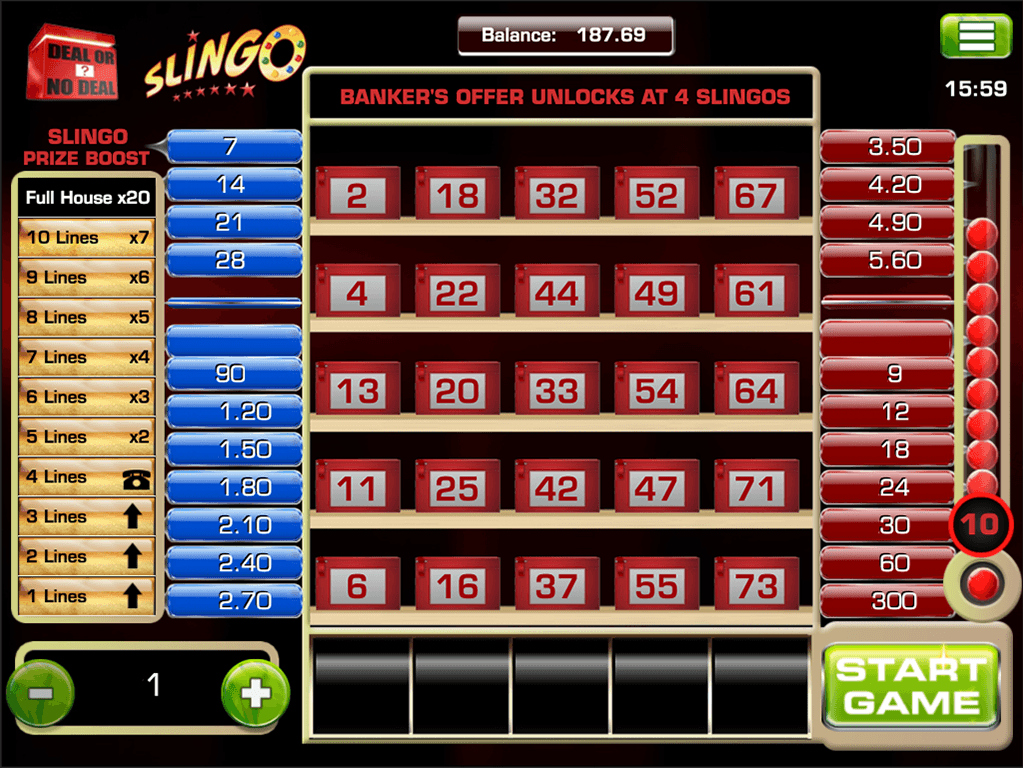 How to Play the Slingo Deal or No Deal Slot Game

Slingo Deal or No Deal is available to play online for free with a Slingo Deal or No Deal demo, but if you want to jump in and play it for real money right off the bat then you are going to need some account and stake money to play it with. Here’s how to get one as easily as possible, by using Wizard Slots:

Now let’s figure out how to play the game itself. Naturally, Slingo games are very different to regular slot games so make sure that you know what you’re doing before you get started or else you will be throwing money down the drain!

Here are some pointers that should help: 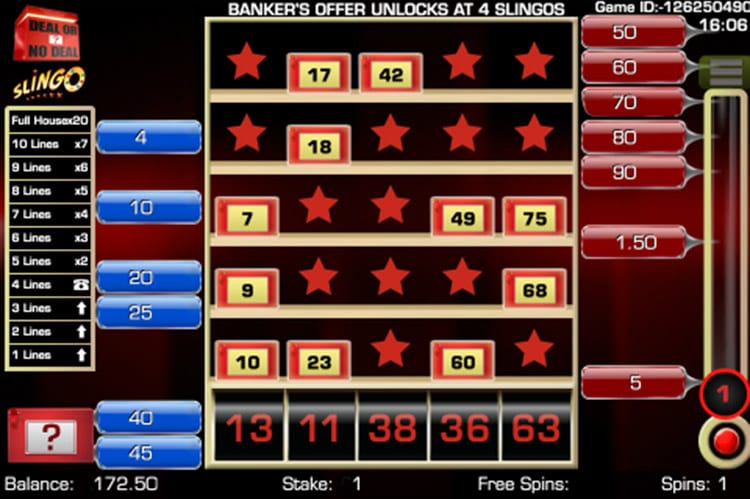 While the RTP of Slingo Deal or No Deal is pretty low by slots standards (95% as compared to an industry average of 96%), it’s actually way higher than the bingo RTP average which comes in less than 90%. So, when you look at it like that, it’s not too bad after all!

It’s hard to pin down the variance of Slingo games due to them being different in nature to a standard slot, but judging on the winning potential, we would rank this as low-medium. It’s hard to win huge cash but you can easily win a little bit here and there.

Some other interesting Slingo Deal or No Deal statistics include a max win of £100,000 (which is achieved by winning the max prize of £5000 with a full house modifier of 20x)

*All values are subject to change at anytime.

Slingo Deal or No Deal Free Spins and Bonus Features

As well as a random free spin at the end of each round, Slingo Deal or No Deal has a fair few pretty cool bonus features. There are more here on offer than there are in most other Slingo games, so if you’re new to Slingo, this confirms that it’s a good place to start!

Here’s a brief overview of each of those bonuses: 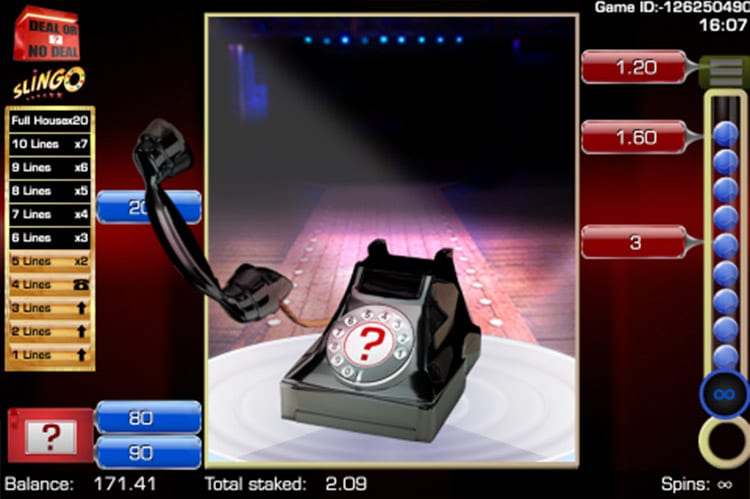 Final Thoughts on Slingo Deal or No Deal

By taking everything we know and love about the original Slingo games and making them better with cool bonus features, Slingo Deal or No Deal could be a hit. Plus, the way it matches the theme and gameplay of the TV show is very nicely done indeed.

The only issue is, it might take a bit of practice to understand what’s going on. 7.5/10. If you are looking for something with a higher rating, then you should try the 10/10 slot machine Red Wizard Fire Blaze Classics slots!