Solar Temple by Playson is a 5 reel and 20 payline online slot. It’s one of the South American themed online slots available to play on Wizard Slots. Some of the slot bonuses that players will be able to experience include; wild symbols, sticky wilds, free spins, multipliers and more.

The game introduces the Flaming Frames here which refers to positions on the reels surrounded by fire. On one spin, the reel positions on fire will end up turning into wild symbols. You can win a multiplier of up to 10x too here and jackpot wins of up to 20,000x your stake.

The slot has a Return to Player percentage of 95.22%, which means the game has a high likelihood of rewarding you if you’re patient and lucky. Check out what else you can find in Solar Temple slot games below.

Playson is an online casino software company that started operating in 2012. The company has a workforce of over 300 employees based in their HQ at Malta. Playson has a number of partners in the industry including big names like; Bet Construct, Leander Gaming, Quickfire and 1X2 Gaming.

They’ve acquired gaming licenses from Malta, the UK and Alderney. They’re known for their 3 reel and 5 reel online slots that you can play now on Wizard Slots. Some examples of their slots include; 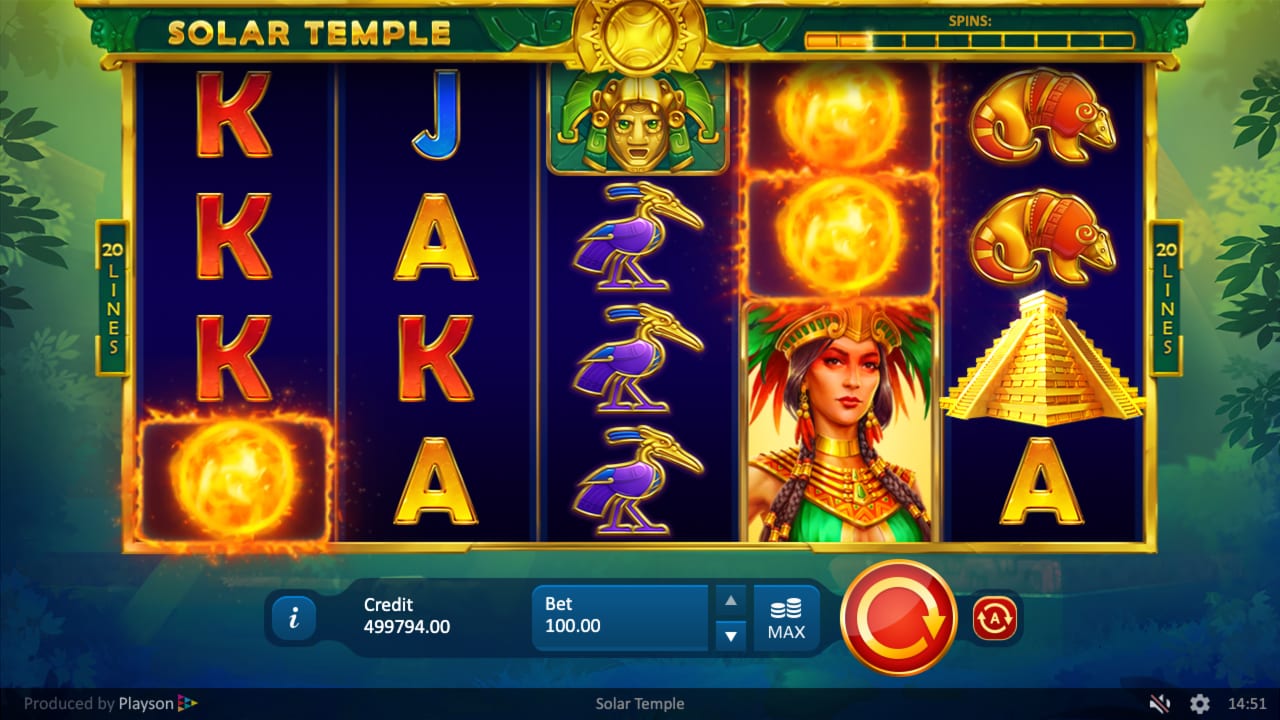 Solar Temple is one of the Aztec themed online slots you can play on the Wizard Slots casino. The design is amazing, it looks a little like Egyptian culture with a twist. It looks like the action here takes place in the middle of the jungle, so get ready to go exploring and find the most amazing Aztec treasures.

Symbols on the reels include card values A, J, K, Q, 9 & 10, red masks, gold masks, the Solar Queen, a possum, chameleon, pelican, wild symbol and a pyramid scatter symbol. The Solar Queen is donned in green with a crown on her head and a staff in hand. She is the symbol of excellence and fierce leadership. 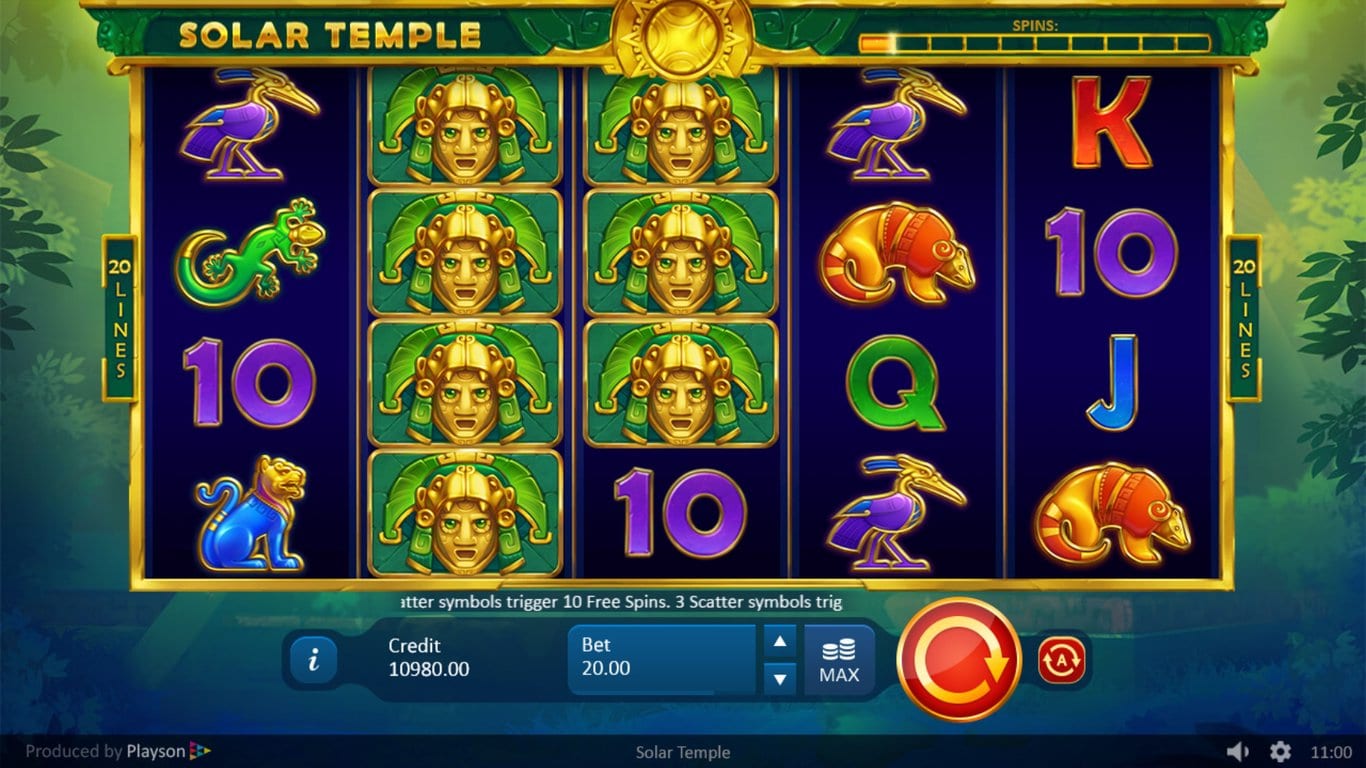 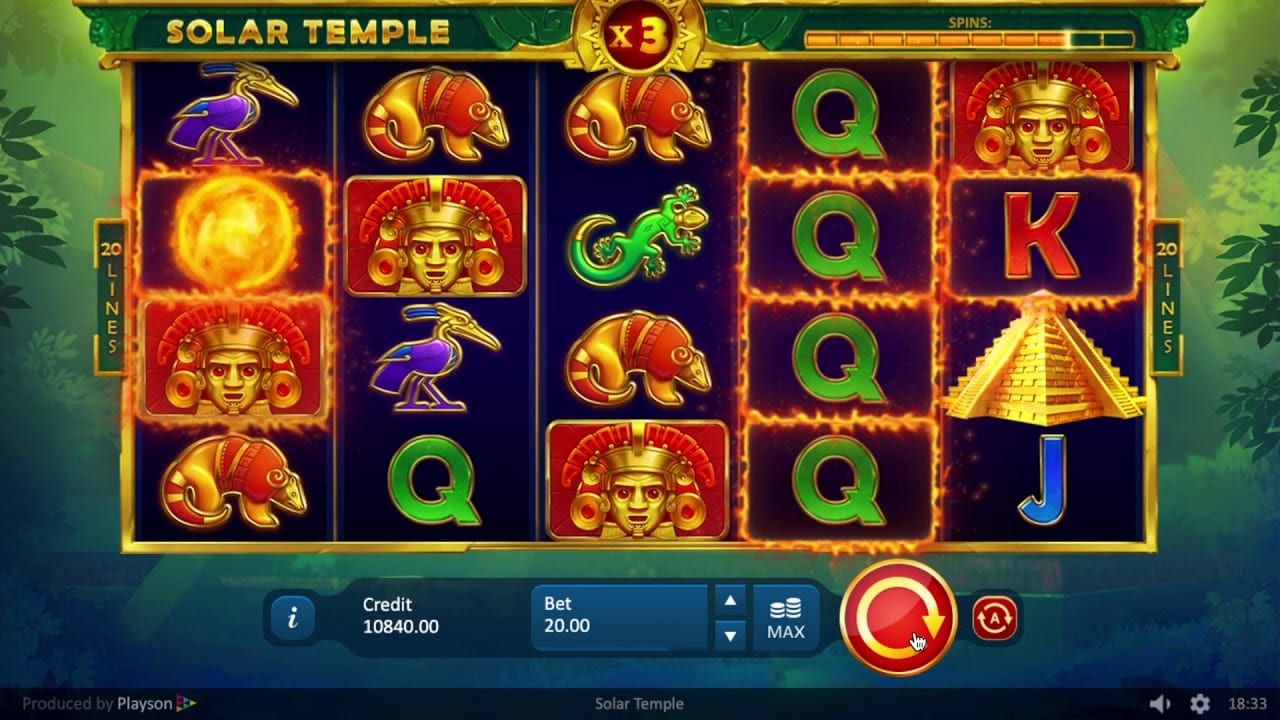 Our Verdict on Solar Temple

Solar Temple by Playson is one of the must play online slots on Wizard Slots, UK’s premier online casino. The slot developers really did a good one with this slot. Some of the bonus features available to trigger, you won’t find anywhere else.

That’s the Flaming Frames feature where the reels ignite and end up covered in wilds. The animation is on point, the visuals are sharp and clear and the features are high rewarding. What more could a punter ask for? The slot game offers a medium to high volatility so there’s more risk as compared to other slots, like the Atlantis Slot, but well worth it. The Return to Player percentage in this slot is at 95.22%.