In 2004 Microgaming released Thunderstruck Slots. A Nordic themed game centred around the legendary Thor. The slot features 5-reels and 9-paylines with special bonuses such as free spins, wilds and many more.

The game really does offer you a superb, fierce and fantasy experience that will fill you with adrenaline in the belief that you can conquer as a god just as powerful as the Nordic God of thunder himself. Be focused and make the right decisions and you’ll gear up with all the essential resources required to take this game by storm and reap the rewards. Thunderstruck is an action-packed journey that totally depends on your commitment and attitude to the game itself, embrace this electrifying slot game and you’ll soon learn to love it more than you could have ever imagined.

The game can grip you and hurl down on you like thunder itself, so be prepared at times to take shelter and do whatever it takes to defend and attack your way into this 5-reel, 9 pay line video slot that has the most majestic features. This is just another one out of the many works of art that Microgaming is responsible for. A slots game with a slightly older touch to your average Microgaming product however as that old saying goes, it's old but gold! 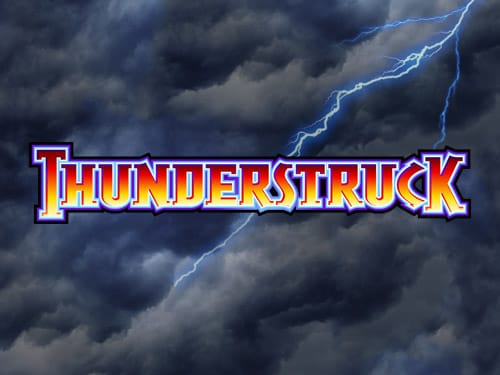 Creating the first online casino as we know them today, Microgaming began their career at the top of the food chain. Based in the Isle of Man, this developer now has one of the largest portfolios within the industry, covering all genres from Video Slots to Land Based machines and now beginning to build an empire of Mobile games – staying ahead of the latest casino game trends. Made by gamers, for gamers, Microgaming pride themselves not only having one of the largest collections of games but on having some of the most creative and imaginative titles to be released within the genre – this developer manages to combine quality and quantity, you can view online UK slots here.

Thunderstruck is just another prime example of the cracking content that they produce, the team at Microgaming have established themselves as a leader of creation. A leader of creation in the sense that they undoubtedly have excelled in reaching all audiences with their games. They really are the finished article, the real deal when it comes to giving punters what they want. The real difference that separates Microgaming with the other is the sheer high-quality gloss that infects every single on their products out there right now. So, if you want a taste of what that looks like get playing Thunderstruck! You can also click to play slot games made by Microgaming.

Created in 2004, this Microgaming instalment will follow the almighty Nordic God of Thunder. Find the power of Thor within this 5-reel, 9 payline video slot for an electrifying experience. The game is filled to the brim with storm-related totems so players should expect to find Thor himself along with his Hammer, a Ram, Horn, and Thor’s Fist, Lightening and a storm struck Castle. In contrast to these in-theme symbols are a selection of generic poker symbols, likened to those found on classic casino table games. Visit here for a full list of best-themed slots!

The Wild within Thunderstruck is the Nordic God himself, Thor, he will act as a substitute for all other none bonus symbols. Adding to the value, any wins containing the Thor Wild will be doubled in true God-like fashion. For even further multipliers players should aim for the Scatter Rams. The presence of 3 of these symbols anywhere within your reel will trigger a premium Free Spin round. During your 15 Spins, all wins will gain an amazing x3 multiplier adding additional coins to that final payout. These spins can then be retriggered by simply locating another 3 Ram symbols. Scatter wins are multiplied by the total number of credits wagered.

Allowing a lower betting range, Thunderstruck can be played from as low as 0.01 coins or as high as 45 coins. This makes this game the perfect playing experience for gamers on a budget, despite the lower pay range the potential multipliers found throughout the game and 96% RTP more than makeup for the earning potential.

So, why wouldn’t you play this game when it has everything you need? Everyone loves a fantasy filled game with bonus and features that will give you weeks and weeks of endless entertainment. A stormy thunderous setting which you’d probably normally associate with a bad day or a day with not much of a special occasion with very little hope or sign of something worth wild unfolding before your very eyes. This is the game that can change that, the grey skies of Thunderstruck are merely hiding and shadowing over the golden beam of light that only you can trigger. 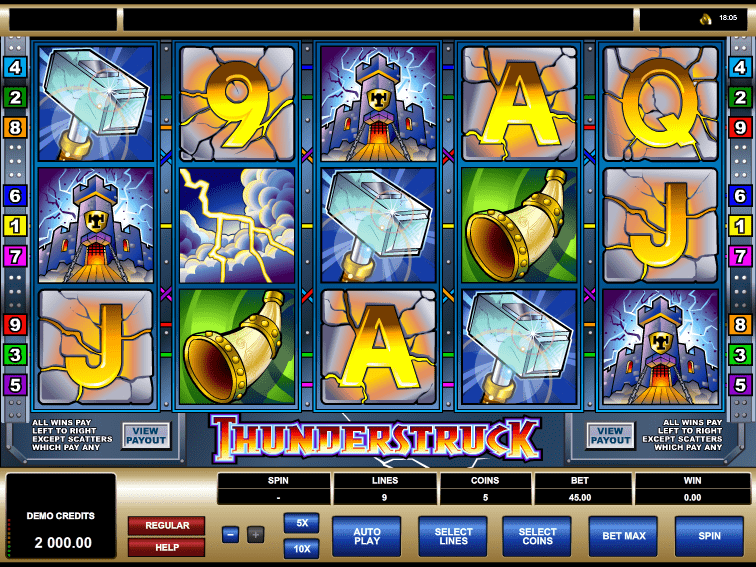 Our Verdict on this Slots game

Despite this game being one of the earlier instalments by Microgaming the graphics work is still amazing to look at. Creating games with a lower payment range add an inclusive nature to this developer’s repertoire for the more casual gamer. The additions of Wilds and Scatters to a rather simplistic video slot format add in a sense of replay value – bringing players back time and time again. Introducing additional uses to the Wild icon of Thor gives a feeling of anticipation with a range of much needed winning spins when appearing on screen – between Wilds, Multipliers and Jackpots he truly lives up to his reputation.

Okay, it’s fair enough to say that although it feels like this game has been around for longer than life itself. It remains a fantastic core production of Microgaming that came before a whole stem of slots games that transformed a generation in creativity for online games. In our eyes, it's an absolute classic of a game that holds a classic name (for any of you AC/DC fans out there). On a more serious note, this game deserves to be continued so if any of you players haven’t already played this game it is a must do, so take a trip back and see the development in Microgaming as a team. If you enjoyed Thunderstruck then you will also enjoy Lucky Pirates.