Vault of Anubis is a high volatility Egyptian-themed slot from Red Tiger Gaming. This 7-reel Cluster Pays slot has many exciting bonus features, from Super Symbols to Generous Gods and Vault Spins. When 4 Vault Spins symbols land on the reels, the Vault Spins feature is triggered, which awards 10 bonus spins. Vault of Anubis also has a maximum win of 5,469x your total wager.

Discover the mysteries of Ancient Egypt in the Red Tiger Gaming casino slot Vault of Anubis. Take a glimpse into what life was like back then when you spin this 7-reel Cluster Pays slot. The Egyptian theme is always a good one, as evident by the numerous slots using it as the setting.

The graphics in Vault of Anubis are spectacular. The reels look very regal, with everything edged in gold, as one would expect in the Vault of one of history’s most famous gods.

How To Play Vault of Anubis

Before spinning the reels, you will need to place your bet. In Vault of Anubis, you can make bets from £0.10 to £4. Once this is done, you’re ready to spin!

Vault of Anubis is played on a 7x6 grid. It has a Cluster Pays format, meaning winning combinations are formed when you land groups of 5 or more matching symbols, connected vertically or horizontally.

The slot has cascading reels, so the winning Cluster is removed, and the symbols tumble to fill the empty spaces, with new symbols entering the reels to fill the grid. This could potentially lead to multiple cascading wins on a single spin.

The golden Anubis symbol is the highest-paying symbol in this online slot; other high-paying symbols include the scarab beetle, the crossed crook and flail, and the Eye of Horus. The lowest-paying is the one that resembles a gold ring with a plant on it, and the other low-value symbols are the jewels displaying the playing card suits. 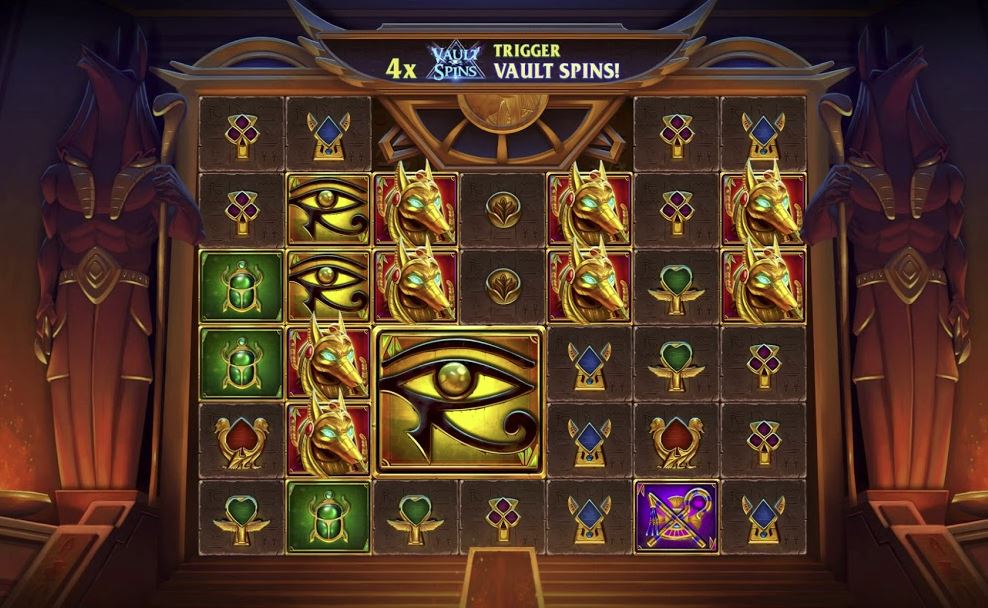 Wild Symbol: The wild symbol is the purple jewel with the word “WILD” written on it; it substitutes for all paying symbols.

Vault Spins Feature: Landing at least 4 Vault Spins symbols will trigger the Vault Spins feature. Once in, you will be given 10 bonus spins. The multiplier can increase with every win during this feature, potentially resulting in some impressive wins.

Super Symbols Feature: During gameplay, high-paying symbols can appear supersized, landing as 2x2 and 3x3 symbols. The symbols this applies to include the Eye of Horus, the golden Anubis, the scarab beetle, and the crossed crook and flail.

Generous Gods: The Anubis statues on either side of the reels may randomly award multiple wild symbols on a random spin. 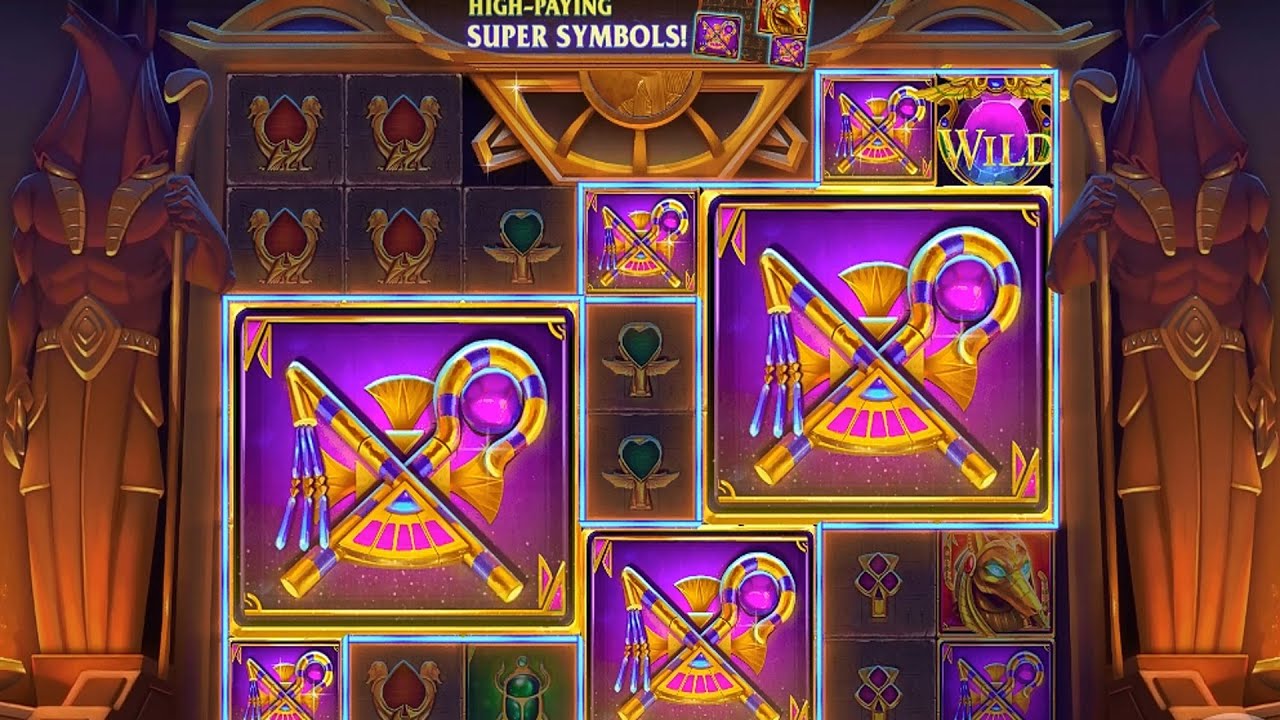 The Vault of Anubis slot has an RTP of 95.74% and has high volatility.

Vault of Anubis is an Egyptian-themed slot with high-quality, regal graphics. You can hear a mysterious Egyptian soundtrack in the background as you play.

The reels are placed inside a temple guarded by Anubis on either side, with golden stairs leading to the reels. As well as clubs, diamonds, hearts, and spades, you’ll see a variety of Egyptian-themed symbols, including scarab beetles and the Eye of Horus.

Vault of Anubis is a fun slot with a mysterious Egyptian theme. The graphics are excellent, and there are a couple of exciting features.

In addition, high-paying symbols can appear supersized, which has the opportunity to help form winning combinations. For example, Vault of Anubis has an impressive potential max win of 5,469x your total stake.

What is the RTP of Vault of Anubis?

What is the minimum bet on Vault of Anubis?

The minimum bet you can place on Vault of Anubis is £0.10.

What is the maximum win available on Vault of Anubis?

Does Vault of Anubis have any bonus features?

There are three bonus features in Vault of Anubis. There’s a Vault Spins feature, a Generous Gods feature, and a Super Symbols feature.

Games Similar to Vault of Anubis