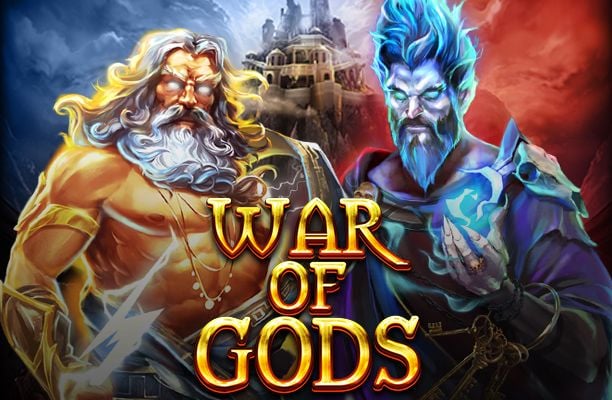 War of Gods by Red Tiger Gaming is a 5x4 slot with 30 paylines featuring Hades and Zeus.

If you like Greek Mythology-themed online slots games, this slot brings you not one but two Greek gods duelling for dominance on the reels!

It is a high volatility slot available to play on the top online slots casino, Wizard Slots, for stakes ranging from £0.10 up to £4.

The maximum amount you can potentially win on this slot is 2,518x your bet.

This game is relatively easy to play. Just follow the steps below, and you're good to go.

Once the game loads, it'll walk you through its paytable. Press the yellow Play button to proceed.

Look above the reels for the other control buttons. You'll find the menu button for the game rules and info, the speaker button to mute or unmute the sound, and the home button to exit the game.

After making any necessary adjustments, you can press the spin button to start playing!

You can hit a winning combination if 3 to 5 identical symbols appear on adjacent reels across paylines. Also, watch out for the unique Gods' symbols for the chance to trigger the Wrath of Zeus, Hades Hellfire, and Warring Gods Bonus Features.

First, on the paytable are some gemstones in the shape of card suits - hearts, spades, diamonds, and clubs. Next is a scroll, skull horn, battle shield, and a warrior's helmet.

Diamonds are worth 1.2x your stake; clubs can earn you 1.4x your bet; hearts can payout 1.6x your wager; while spades peak at 1.8x your stake—all for a five-of-a-kind combination.

Now to the premiums, landing 5 scrolls can earn you 2x your stake, but for skull horns, you get 3x your bet. The shields and helmets are worth 4x and 5x your wager, respectively, if you land 5 across a payline.

Although War of Gods offers no wilds or bonus symbols, it makes up for it with special Hades and Zeus symbols which can trigger new features in the base game. This online slot game has 3 bonus games where you may get a symbol upgrade and expanding symbols with more reels.

If you land two 1x2-sized Zeus symbols on the first and last reel in a single spin, it'll trigger the Wrath of Zeus feature. As a result, only high-value Zeus symbols will appear on the reels. After which, the characters become locked on the reels as others spin. And they may transform into 1x4-sized symbols in the process.

You may also land a special upgrade symbol during this feature. If this happens, all visible Zeus symbols will increase in value. And what's more, this can occur up to 3 times, increasing the worth of the characters each time.

The feature continues unless you fail to land new symbols in a spin.

Hades Hellfire only unlocks when two 1x2-sized Hades symbols appear on the first and last reels in a single spin. If this happens, it'll undergo the same process as the above. Only high-value Hades symbols will appear on the reels. In addition, every Hades character that appears remains locked on the reels for that period, and some may even transform into 1x4-sized symbols.

In this feature, you may land an expanding symbol. And if it does happen, the playing grid expands, with the chance to increase to a max 7x6 layout, increasing the paylines to 60. Any super Hades that lands on the new reels extend to 1x6-sized characters. And such can earn you up to 50x your bet if it occurs in a seven-of-a-kind combination.

Like the Wrath of Zeus, Hades' Hellfire ends if you land no new symbols on the reels.

Since this is essentially a combination of the first two features, you could land both the upgrade and expand symbols in this feature. As a result, you can get symbol upgrades and reel expansion granting you up to 60 paylines!