These spiritual creatures that make up these 5 reels by 25 pay line slot were somewhat revered by that of the Indian Americans. The spirit creatures worshipped by native Americans take centre stage within the reels, known for their rewarding powers. Will these spirit creatures favour you? Only time will tell! Every creature has its natural strength, giving each a sense of unique power and responsibility. Especially the wolf, the wolf resembles hunger, determination and the gold? Well, that’s up to you when you’re spinning the reels of these iconic animals. Yeah, this slot certainly looks the part with its neat visual aspects, its cool tone of colours and its backstory, it couldn’t possibly get any better, could it? Yes, yes it could, and it does. Because these reels are not only full of our favourite animals, but it’s among the best online slots that are packed with stacked wilds, re-spins and huge cash prizes too.

The animals are certainly coming out to play because it’s another slot game by Pragmatic Play! For those of you who don’t know, Pragmatic Play is a digital casino games provider that is growing rapidly in the slots industry. Their passion shines through for casino when it comes to games like Wolf Gold, they are providers that are dedicated to creating new products that are entertaining and unrivalled, on this incredible rise they have gone on to produce games such as Pixie Wings and Jurassic Giants, they are responsible for a bulk of the newer games on the market which have taken off thunderously, sending shockwaves through the market. Pragmatic Play is a Maltase based igaming developer, which has made steady development within the market since 2015. The company is able to deliver a high standard gaming experience by introducing the latest advancements in the mobile and desktop across all games.

The fast-paced development of the company is arguably a result of the 100+ igaming specialist, which have effectively worked together to develop a wide range of awarded winning slot games. EGR B2B Awards recognised Pragmatic Play excellence by awarding the team with Software Rising Star category for a combination of graphically superior graphics with extremely playable and appealing gameplay, it’s no wonder their games prove so popular. What’s more, Hot Safari and Queen of Gold were both shortlisted for the EGR Operator Awards, Game of the Year but the just missed out on the prestigious prize on the final hurdle. Pragmatic Play has only been inspired by defeat and is forecasted to continue developing slot games that are fun and innovative for players. So, keep an eye on Pragmatic Play because there’s a lot more to come from them yet! Check out and learn to play slot games by Pragmatic Play. The assortment of fantastic games developed by Pragmatic Play is guaranteed to bring you endless hours of enjoyment. Once you have given Wolf Gold a spin, why not change it up? Only the best Pragmatic Play slots are available, such as: 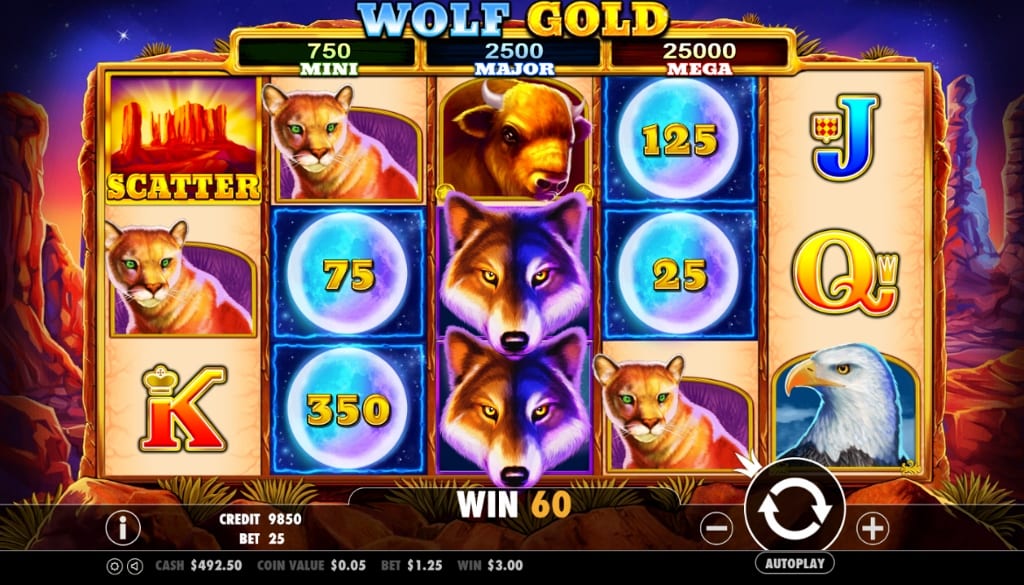 About the Latest 2018 Slot Wolf Gold

Pragmatic Play went for a more dated style for this slot game however it fits the theme of the slot and the purpose if it wonderfully. Wolf Gold has a total of three different jackpots to entice its players. Whether that’s the mini, major or Mega jackpot, that lies with you. Their values lie at 7,500, 25,000 and 250,000. As you can see there’s no holding back when it comes to the mega!

It's no mystery if games like this are well known to be one of the best slots you can play. As you spin the reels you will be comforted by an Indian American soundtrack that will create a true wildlife atmosphere as thought your standing amongst the animals themselves as the night sky creeps up.

In terms of the paylines, they are static. The only aspect of the game that remains like that, you could say. You’re in full control of the coin amount, as well as the quantity per payline. There is not a maximum bet button in this game however you still have the option of autoplay, use the ‘+’ and ‘-‘ when you wish to adjust the betting stake.

The scatter symbols for Wolf Gold slot resemble a red rock with the sun setting behind. If you locate three of these symbols on the reels you’ll be granted 5 free spins when activated reels 2-4 will transform to one big symbol. Each time 3 more scatters are found during your free spins, you will be granted another 3 free spins.

Wolf Gold is a game that is packed with bonus features with many ways for players to spin to win big, it sports an animal theme based on Indian American culture and how they worshipped these magnificent creatures. Worship them today and perhaps they’ll bring you good fortune. If you enjoyed Wolf God why not try Sirens Serenade.