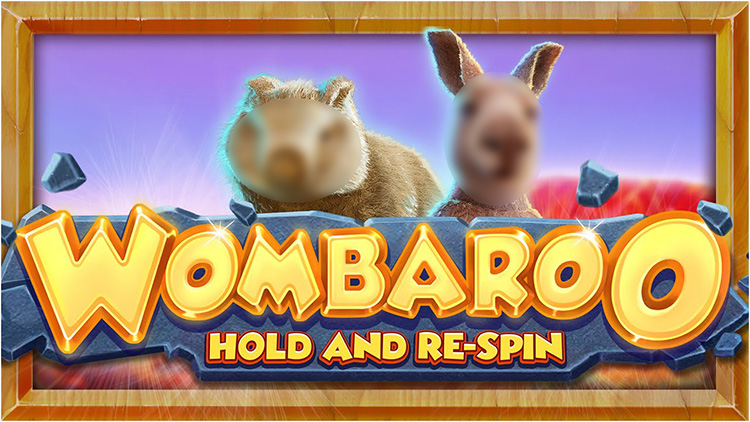 Wombaroo, by Booming Games, is an animal-themed slot with 20 paylines played on a 5x3 grid.

Wombaroo presents an entertaining game featuring Kangaroos and Wombats in an Australian setting. The duo stand against the Ayers Rock background in the slot, which can add to its charm. For example, if you land a winning combination, the characters display a little victory dance.

The background music is another quality that can add to the charm of the slot. It is upbeat, jolly, and fast-paced. So, it can help liven up the game, gearing you for some potential action, especially during the bonus round if you manage to activate it.

Speaking of the bonus round, the Wombaroo slot offers a variety of bonus games. They include a Super feature, Kangaroo Free Spins Feature, and Wombat Wins. So, while the base game might be lacking in action, there are different means to try and cop the maximum potential prize of up to 4,000x your stake if things work out well in the bonus game!

How To Play The Wombaroo Slot Game

This slot has a wide betting range starting from a minimum of £0.20 up to £20 per spin on Wizard Slots online casino. You can see and select your preferred wager from the available options through the stack of casino chips when you load the game. However, you can adjust your stake value via the + and - buttons on the bet panel.

Press the "i" button if you'd like to view the game rules. Also, the three-line menu button harbours the game settings, and you can tap it to set and customise the settings to your taste.

Finally, click the spin button to start playing a new game round in the Wombaroo slot!

Since this slot takes an animal approach to the theme, you can expect to see animal characters on the reels. Then, there are card suits to complete the grid and serve as the low-value symbols.

No matter the symbol, you need at least three matching symbols, on consecutive reels, across a fixed payline to hitch a win. The characters must also align from the leftmost reel to the right of the grid. Your potential win amount then depends on the kind of symbols and how many you land in a match. For example;

If you want to quickly check the potential symbol payouts, just click or press on the specific symbol on the playing grid. It will then show you their possible values.

Like most video slots, wild symbols can appear, and they may help you to form potentially winning combinations. The wild symbol is represented by a coin with a ‘WILD’ inscription, and it can substitute for any of the above paying symbols, bar the scatter. Even better, it can award you up to 125x your stake for a full line of five matching ones.

There are two scatter symbols in this slot—one represented by a Kangaroo character and the other by a Wombat symbol.

Landing three scatter symbols of the same type will trigger the corresponding feature. That means you get the Kangaroo Free Spins for three Kangaroo scatters, and the Wombat Wins feature if it's a set of three Wombat scatters you land.

In addition, scatters lodge in the Super Feature collector meter atop the reels, which can trigger the Super feature if full. However, you can only land these symbols on the first, third, and fifth reels.

Once triggered, this feature awards you eight free spins where all landing wilds remain locked on the screen. Therefore, it can result in many combinations of wilds, potentially earning you large payouts! Unfortunately, there's no way to retrigger the free spins, so the feature ends once you exhaust your eight free spins.

The Wombat Wins feature offers a typical hold and respin bonus round, and you can only get it if you land three Wombat scatters in a spin.

The activation causes all triggering symbols to transform into coins holding specific values ranging between 1x and up to 100x your bet. After which, they become sticky, remaining on the reels for the duration of the feature.

You get three respins at first, but if you land a new scatter coin in the process, the respins reset to three. The round ends if you fail to land new respins or if you fill up the playing grid. And if it does, you get the total value for all available wild symbols on the playing grid.

This one activates if you fill up all 30 Super Feature collector meter units atop the reels.

Landing two scatter symbols in a spin takes it up a notch in the collector meter. So, you need up to 15 pairs of any scatter to unlock this feature.

Once you trigger the feature, it awards you eight free spins, and the same process occurs as in the Kangaroo Free Spins. The only difference is that at the end of the free spins, you get a cash payout of either 5x, 10x, 50x, or 100x your bet!

We really enjoyed playing the Womaroo slot game. The graphics are genuinely pleasing, and the animations can uplift the game's ambience. Not to mention the exciting features that the game offers.

Although we would have preferred if some of the action existed in the base game, the features can still have a great appeal. Plus, you can potentially cop lucrative payouts of up to 4,000x your bet through these bonus games.

The slot has high volatility with a slightly below-average Return to Player value. This maths model may be discouraging for some players. However, it may be overlooked, considering the many exciting features on offer.

Our overall rating for the Wombaroo slot is 7/10, and we can recommend it, especially to players who may enjoy scatter-rich slots!