Avalon II- Quest for The Grail 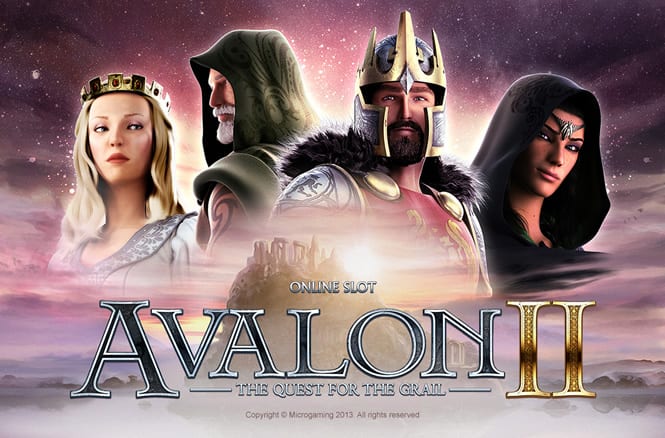 Slot Review of Avalon II- Quest for The Grail

Avalon II: Quest for the Grail is the second instalment in the Avalon series, following its deeply successful predecessor also by Microgaming. This 243-payline slot will take you on yet another adventure with King Arthur and his Knights of the round table.

With games made to be played, Microgaming are the developers of many genre-defining games. Bringing players titles such as Dragonz, BAR BAR Black Sheep, Hot as Hades, the Avalon slot, Microgaming have been shaping the online gaming landscape since 1994.

This amazing success lead to them securing their first branded live dealer studio with Playboy, but their success didn’t stop with this, during their 2-decade long career they have also managed to create over 150 land based machines, over 35 multiplayer games and a wide range of ever-expanding of progressive slots. Sure, to have something for everyone, Microgaming are the place to be. 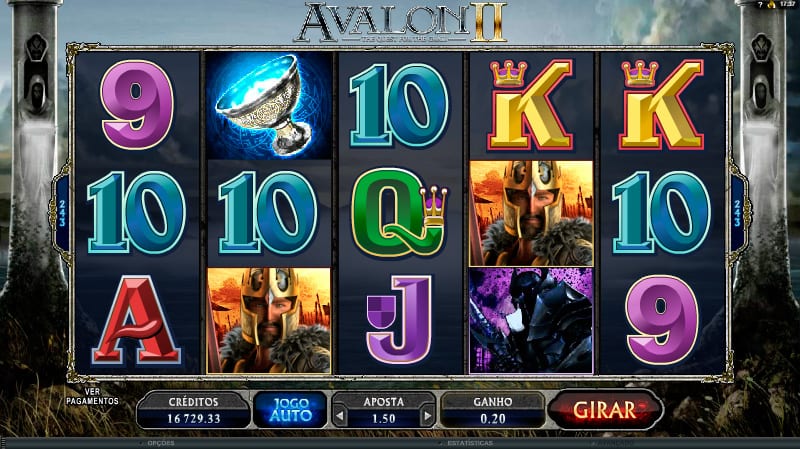 Filled with a range of rich and rewarding bonus features Avalon II slots games transports players to a realm beyond their wildest fantasies. With 2 randomly triggered bonuses, each spin has the potential for greatness – regardless if it contains matching symbols or not. The first of these random bonuses is the Merlin feature, in which the mystical wizard will award players with a random cash prize or multiplier. The next randomly triggered bonus is an Expanding Wild, this wild will take over the entire middle reel, drastically improving player’s chances at a winning combination.

Despite the random bonuses creating a well-rounded feel of anticipation they are not the most exciting elements within Avalon. To feel true excitement players should aim towards the Grail Bonus feature, this round has 8 bonus games within and is triggered when 3 or more Grail symbols appear anywhere on the reels. The moment this has been achieved a journey will be launched throughout the Kingdom on the quest to retrieve the Holy Grail, the amount of times the Holy Grail Bonus is triggered determines the bonus game available.

This bonus game requires players to roll a dice, and reforge the iconic Excalibur. Once a number has been revealed it will connect with a piece of the sword, if there’s a match available to fragment will more into the reforge display. The payout is the number of pieces obtained times the rounds wager.

Players must select a Wild, they will then receive 15 Free Spins with a 1x multiplier. The gamer can then choose 1 of the high valued icons to act as an extra wild, giving players 2 wilds with the extra receiving a 2x wild multiplier.

Once the first 2 bonuses have been played players can select from either bonus 3 or bonus 4;

Players must select 1 out of 5 options, hoping to select the highest available multiplier of x160.

Players will receive 20 Free Spins with a 1x multiplier. During this round keep a look out for the Avalon II wild as this acts as a Trailing Wild. When 1 of these Wilds lands on row 1 or 2 it will be held in place and expand downwards for 1 Spin.

12 items will appear on screen, players should aim to match 2 helms and will be asked to pick at random until they do so. The helms each have an attached multiplier ranging from an x6 to a huge x20. Each non-matching pick increases the multiplier from 2x to x8.

This feature will grant players 20 Free Spins with a 2x multiplier. Rolling Reels will apply at Morgans Keep meaning each win will increase the multiplier from 2x to 3x all the way up to 6x allowing players to potentiall get 6x on every Free Spin.

Each move is guaranteed to grant players a cash prize. The aim of the game is to select block and attack against the Black Knight to hopefully defeat him and take home the Holy Grail.

The final bonus in this amazing adventure will give players a wheel to spin. Upon the wheel is a range of bonus multipliers, with 3 winning wheels to spin in total the grand total will accumulate to grant the players one final award. 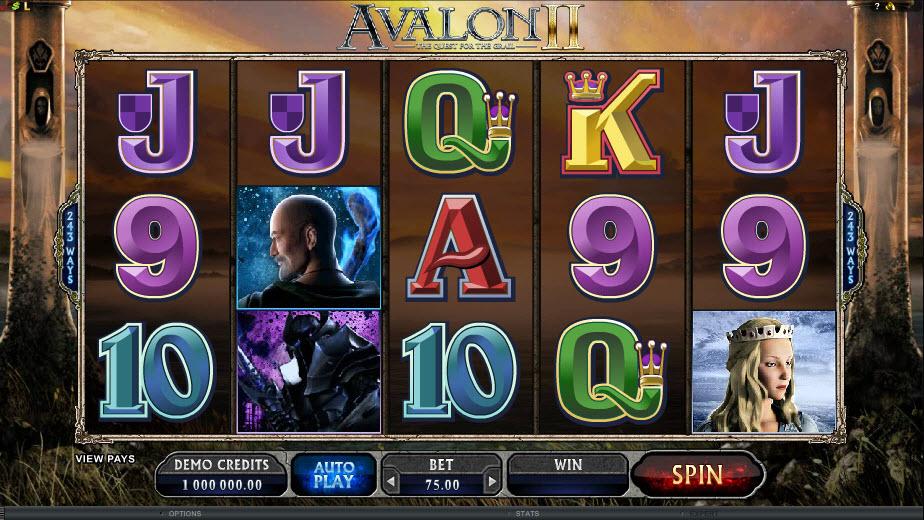 Avalon II is one of the most in-depth video slots on the market. Many machines attempt to create multiple bonuses but end up having quite a few double up awards.

Microgaming has managed to create a machine with 8 bonus rounds that all feel fresh and new. Every mini-game could stand alone and help towards a fun digital slot but when combined it feels like Merlin has worked his magic one last time.