Powered by the industry-leading developer NetEnt, Berryburst is a modern slot that uses the Cluster Pays format. Perfect for a hot summer’s day, Berryburst's theme is based around an ice-cold drink that is full of bubbles which make up the game board. And it's available here at Wizard Slots.

This 5-reel slot uses the Cluster Pays game engine which means that there aren’t any active pay-lines for you to win on. By collecting clusters of 5 symbols or more, you’ll hit winning spins. To help you out there are Wild Symbols and Expanding Wilds on offer. Experience this unique slot format today.

Their cutting-edge platform has developed unique titles covering an array of adventurous themes including Halloween Jack and Jimi Hendrix. The strong working culture at NetEnt allows them to keep working at their craft and their industry dominance shows no signs of slowing down. If Berryburst was a suitable game for you, play some more of NetEnt’s great titles, such as: 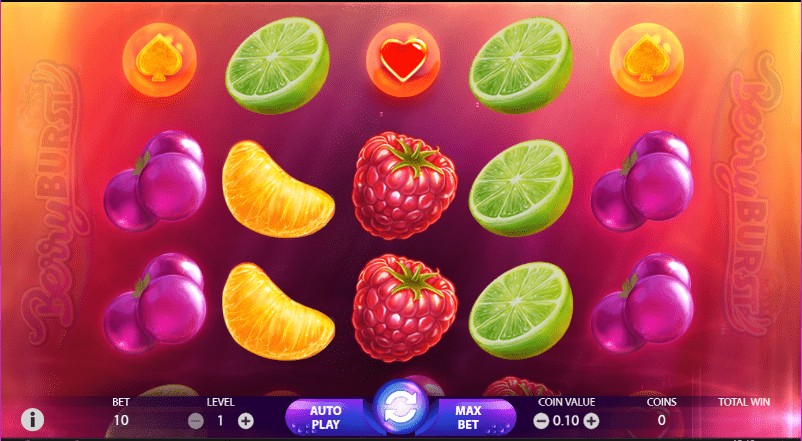 Greeted by upbeat music and the bubble popping noise of symbols landing on the reels, Berryburst is one of the most pleasant slots that you must play on our slot games today. The red and purple infused backdrop gives off the illusion of being liquid inside an ice-cold berry blast. Feel the blend of citrus flavours as you can play the best UK online slot games like this one.

Before you start spinning, discover which symbols are worth what so that you know what to keep an eye out for. The lowest symbols in value within this slot are the pink diamond, orange spade and red heart. As for the medium value symbols, you’ll have to hit the lime, berries, orange slices and raspberries.

Due to the cluster aspect of the game, the raspberries can pay an enormous 5000x your stake if you connect with 15 of them. In addition to the base game, you’ve got some great bonus features to activate, including Cluster Pays, WILD Symbols and Expanding WILDS. Learn more about them below:

When one or more WILD symbols land on the reels in the base game, they will expand to cover the entire reel that they landed on. In addition, they will trigger a re-spin.

The WILD symbol will expand and cover the entire reel that it lands on. Also, it will lock in place for the re-spin.

Any new WILDS that land during the re-spin will lock and trigger an additional re-spin. 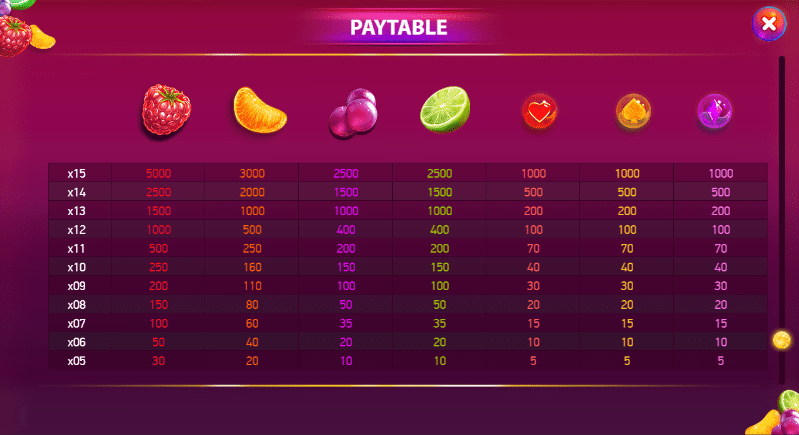 Berryburst centralises its gameplay around a modern concept of clustering. Like NetEnt’s leading title Starburst, Berryburst has some of the same gameplay attributes as well as a vibrant and uplifting design.

Despite not having a Free Spins Feature, there are some quirky bonus features that can deliver some huge pay-outs including Cluster Pays, Wilds and an Expanding Wild.

If you want a break from overwhelming titles, open up Berryburst and enjoy the soothing bubble-like tones of the symbols falling into place. Or we recommend that you play Legend Of The 5 Ninja.