Down the Rails by Pragmatic Play is a 5-reel and 20-payline slot. Stakes range from £0.20 to £4 per spin on every mobile device. The highly volatile Down the Rails slot has bonuses like Free Spins, Multipliers, Wilds, and more. Join Wizard Slots to play this slot or explore our catalogue to play real money slots.

Down the Rails Slot Review

See one of the most iconic pieces of British history when you play the Down the Rails slot game by Pragmatic Play. It's a 5-reel, 3-row, and 20-payline slot about the world's first underground railway, The London Underground, also known as The Tube. Playable from minimum stakes of £0.20 per spin, the game is available on all mobile devices.

Down the Rails certainly has plenty of bonus features further down the tracks, such as Free Spins, Multiplier Wilds, Stacked Wilds, Respins, and more. With up to 10 extras available, there's plenty to get excited about in this online slot.

This is a train ride you don't want to miss. So log in to slot games casino Wizard Slots to play the Down the Rails slot by Pragmatic Play.

How To Play Down the Rails

Set your preferred wager using the + and – buttons on the right.

Click the Play icon next to start the game.

Winning combinations occur when 3, 4, or 5 matching symbols land on a payline across the reels, starting from the leftmost reel.

Special symbols include the newspaper wild symbol and the train bonus scatter symbol. Wild symbols can replace regular symbols and could complete winning combinations. In addition, they can also trigger payouts of 2x, 5x, and 25x your stake when 3, 4, or 5 land. 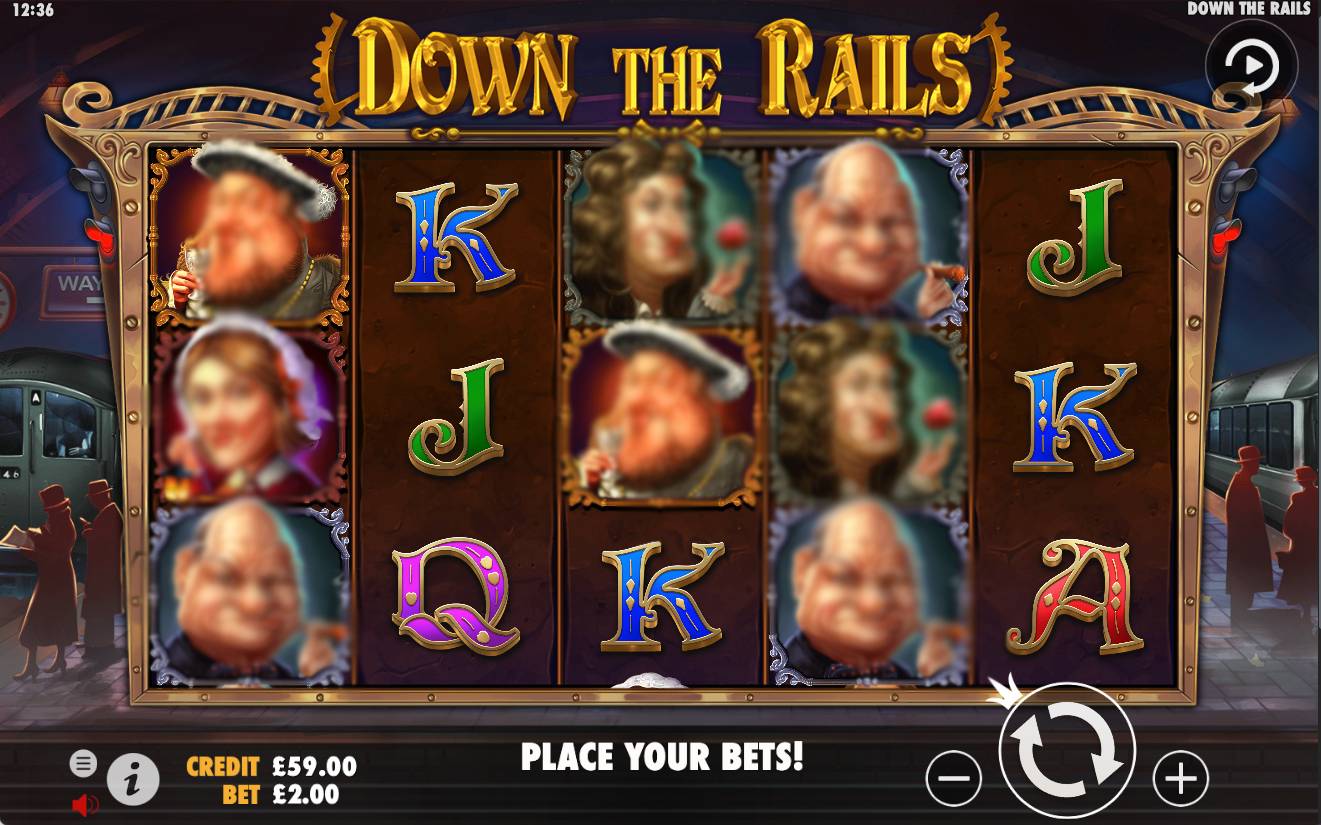 Down the Rails Bonus Features & Jackpots

You can randomly trigger 1 of the following 5 base game modifiers:

Tunnel Vision: Mystery symbols appear on the reels, and all transform into the same symbol.

The Big Smoke: A 3x3 colossal symbol or bonus symbol lands on the first 4 reels.

Bonus Blitz: This can randomly trigger the Bonus feature.

If 3 or more scatter symbols land, they trigger the Bonus round or End of the Line feature. So, you get 1 of 5 bonus features randomly selected.

You can gamble to get another feature or accept the one you get. A winning gamble wins you the next high-tier bonus. However, losing a gamble wins you a mystery cash prize from 4x to 24x your stake and a ticket back to the base game. Your gambling window ends when you accept the bonus or win the End of the Line feature.

You cannot retrigger any of the bonuses. The bonus features are:

Pentonville: You win 5 free spins. When winning combinations land, they reflect in a cluster while the other symbols re-spin. The re-spins end when no other symbols can be added to the cluster.

Buckingham Palace: You win 8 free spins. Fully stacked wilds can land on the reel strips. If any stacked wild symbols land outside the screen, they move and cover all the reel positions. In addition, all the character symbols can turn into the highest paying symbol.

End of the Line Feature

Trigger this Hold & Respin feature and win 3 re-spins. The empty grid is where character money symbols can land. The respins counter resets to 3. Money symbols can lock in position with values of 1x to 2,500x your stake; these are the character symbols with a value attached.

In addition, the game collects any special symbols that land. They include:

Extra Life: Collect 3 and win an extra life. So, this extra life resets the respins to 3 if you run out of spins.

Prize Boost: Every 3 of them increase the value of the current money symbols.

Expand: If you collect 3, you unlock an extra row. You can climb up to 5 rows high.

Multiplier: Every 3 symbols collected will increase the multiplier from 2x to 3x, and finally, 5x. The multipliers apply to the total win from this feature. The feature ends when you run out of re-spins, reach the win cap, or land a full grid of money symbols.

Down the Rails RTP & Volatility

The Down the Rails slot theme honours the history behind The Tube. However, this may be hard to grasp at first because all the famous British characters appear in a caricature style on the reels. They are Henry VIII, Winston Churchill, Shakespeare, Florence Nightingale, and Sir Isaac Newton. They all add a comical feel to the design that feels good to look at.

The action occurs at a 1900s train station. A flurry of activity lies in the background, while the bronze metallic reels appear in the front. The caricatures are among the game symbols, plus the usual playing card values A-J.

A laidback tune plays as you spin the reels, often overtaken by the sounds of a bustling train station. It's one of the best parts of the base game because it makes the game feel more realistic.

Down the Rails Review Summary

The Down the Rails slot captures the keen eye for detail that Pragmatic Play is known for. We love the ode to British culture by featuring famous people, landmarks, and rich history. In addition, the caricature design adds an amusing aspect to the game that's sure to be memorable.

Not only does Down the Rails have a unique theme, but also a great range of bonus features. Of course, the best part has to be the different types of Free Spin features, but there are also Multipliers and Colossal Symbols available. In addition, you can also land money symbols with prizes of up to 2,500x your stake, whilst the maximum win available is up to 5,000x your stake!

Down the Rails is the complete package if you like an online slot with superior design and a large collection of bonuses. Join Wizard Slots to give the Pragmatic Play slot game a ride.

Down the Rails FAQs

What's the minimum bet on Down the Rails?

Minimum bets in Down the Rails start from £0.20.

What is the RTP of Down the Rails?

Can you play Down the Rails on a mobile phone?

Yes, the Down the Rails slot is compatible with all smartphones.

Does Down the Rails have a free spins round?

What's the volatility of Down the Rails?

Down the Rails is a high-volatility slot.

Can you play Down the Rails for real money?

You can play the Down the Rails slot for real money at Wizard Slots for a max bet of £4 per spin.

Games Similar to Down the Rails