Golden Elixir is an online slot created by Microgaming in conjunction with Half Pixel Studios. It is a medium volatility slot playable on 5 reels and 3 rows with 243 ways to win. To play this online slot, place your bets from a minimum bet of £0.20 to a maximum of £20. There's also a maximum win of up to 2,400x your stake.

Golden Elixir is an online casino slot all about magical potions released by Half Pixel Studios. It is played on 5 reels, 3 rows, with 243 ways to win. Golden Elixir comes with a Return to Player (RTP) of 96.19% and medium volatility.

Bonus features include a Free Spins bonus game, enchanted wild stacks, wild symbols and scatter symbols. The minimum bet is £0.20, and the maximum bet is £20, meaning this slot may appeal to many players.

The maximum win is up to a whopping 2,400x your stake. Read more about this slot's metrics, or join Wizard Slots to start playing. A magical world awaits you!

How To Play Golden Elixir

If you want to step into this chamber of magic and potions that is the Golden Elixir slot, you need to know how to play it. You can find the paytable and other game information by clicking the menu icon and then clicking the (i) icon that appears on the next screen.

Then, press "Continue, " click on the stacked casino chips icon to place your bet, and press Play. When 3 or more matching symbols land on adjacent reels, beginning with the leftmost reel, a winning combination is formed.

However, the scatter symbols, which are the "Free Spin" symbols with intricate designs, can land anywhere and trigger the Free Spins round, as long as 3 or more are in view.

A shiny silver W represents the wild symbol. This symbol substitutes for all paying symbols except the scatter symbol. The wild symbol can appear on reels 2, 3, and 4. 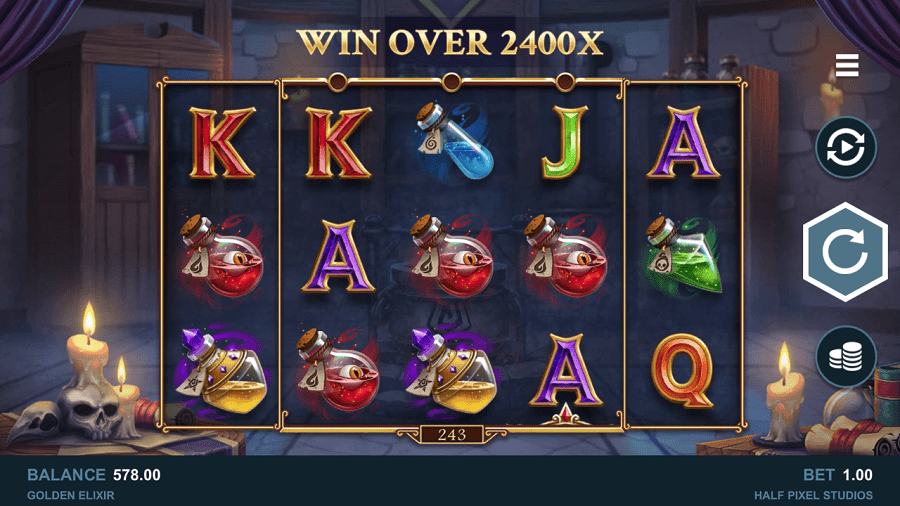 The Golden Elixir slot has a bonus round, the Free Spins feature and a feature that can randomly activate during the base game, which is the Enchanted Stacked Wilds.

The maximum number of Free Spins you could get is 15. When you run out of spins, the feature ends.

Enchanted Stacked Wilds: This is a feature that can be randomly triggered on any spin in the base game. Reels 2, 3, or 4 will be highlighted and lit up when it is active, and Wilds landing on these reels will be super stacked as 3 symbols tall.

But all 3 wilds aren't guaranteed to be visible simultaneously. It is not uncommon for 1 or 2 wilds to appear on the reel while the other wilds appear outside, either at the top or bottom.

The enchanted wild stacks feature triggers on every spin during the Free Spins round. 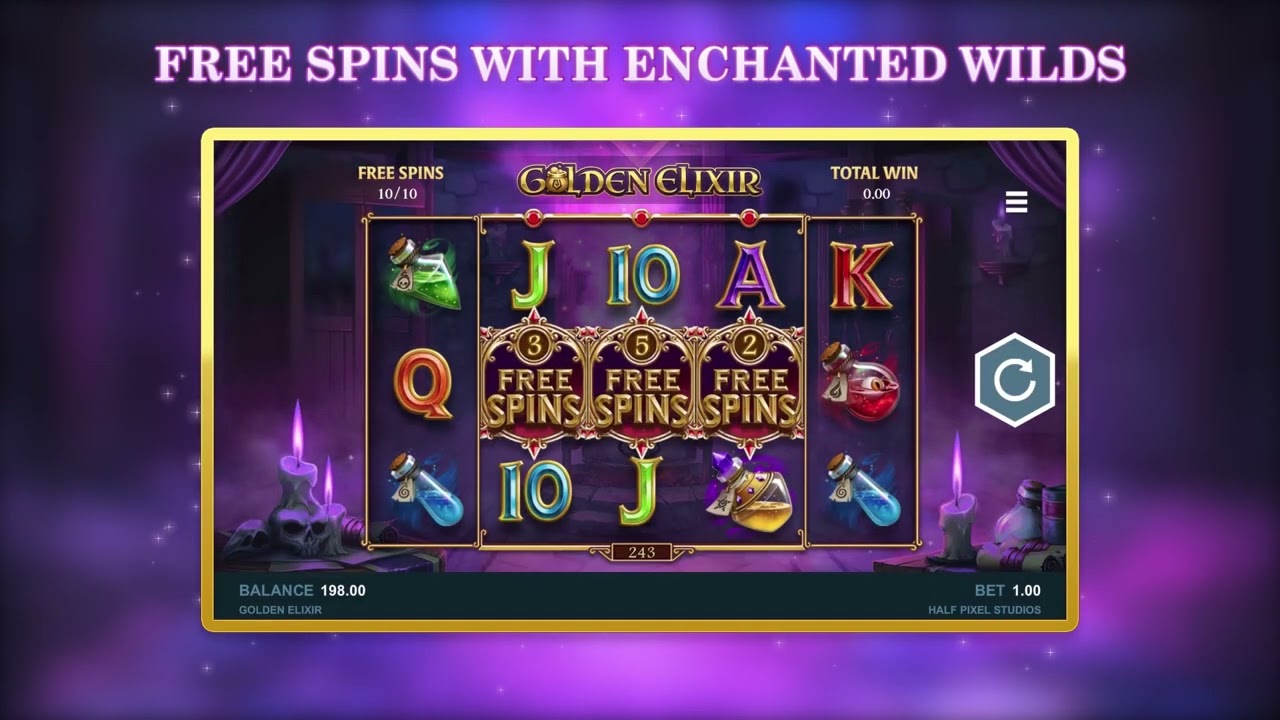 The Golden Elixir slot has an RTP of 96.19% and medium volatility.

Golden Elixir appears to be in an alchemist's chamber. In the background, a dim room sits behind the translucent reels while a gold border surrounds them. The potions are all detailed with sleek designs and articulate renderings, making the game visually appealing.

Golden Elixir gives off creepy vibes with stone floors, walls, and wooden pillars running from the floor to the roof adorning the interior. There are a few candles on the table, one sitting on top of a skull. An enormous cauldron is at the centre of the room but is only just visible due to the reels.

Mix up some potions on the Golden Elixir online slot for the chance to potentially win up to 2,400x your stake. Ensure you keep an eye out for the golden elixir potion symbol that pays out the most.

The scatter and wild symbols may randomly appear during gameplay and trigger the Free Spins bonus features or potentially help form winning lines.

The random Enchanted Wild Stacks feature is impressive, and the fact that it can trigger randomly during the base game adds a nice variety to regular spins.

If you like the sound of this slot or want to see what other slots are on offer, sign up to Wizard Slots today!

Can you play the Golden Elixir slot on a mobile phone?

Yes, the Golden Elixir slot is available on all mobile devices that support HTML5 programs. So, as long as you have a smartphone, tablet, or iPad, you can play this slot.

Can I win real money on the Golden Elixir Slot?

Yes, you can win real money on the Golden Elixir slot. You could potentially win up to 2,400x your stake.

What is the RTP of Golden Elixir?

What is the biggest win available on Golden Elixir?

The max win on the Golden Elixir is up to 2,400x your stake.

Does the Golden Elixir slot have Free Spins?

Yes. The Golden Elixir slot offers up to 15 Free Spins from its Free Spins bonus feature.