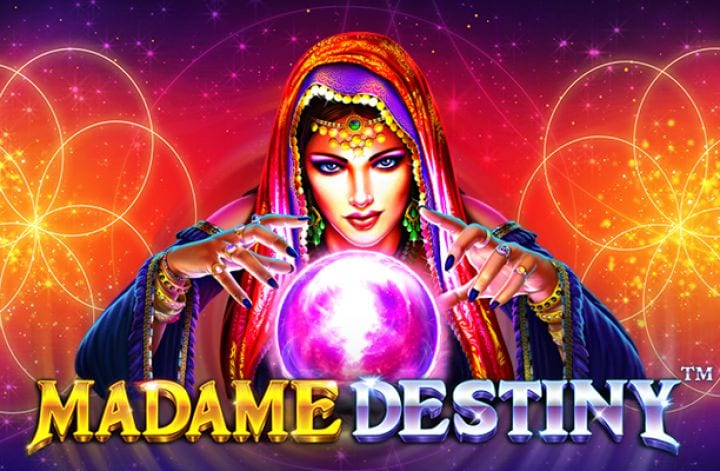 Here is an intriguing slot from Pragmatic Play, as this developer uses a fortune teller theme to create a mystical gambling experience.

A simple five reels are available to play with which create 10 pay lines in total. So, on the surface level, it seems a pretty straightforward online video slot, but for the role of the fortune teller in question.

She adds an element of unpredictably and plays a key role in activating bonuses here in Madame Destiny, with her overriding presence felt on every spin whether she predicts big wins for you or otherwise. This game has rewritten the destiny of all casino online slots with its brilliant gameplay and mystical theme!

Madame Destiny crystal ball has it all, with chances to claim prizes of up to 900x the total bet and extra rewards from free spins with multipliers and a wild symbol that doubles winnings you would be silly to miss out.

Although the slot is nothing new in terms of how the slot works, the easy gameplay, popular mystical theme and beautifully designed symbols mean is a combination that can be enjoyed via online and mobile platforms.

One thing is for sure, Pragmatic Play is one of the fastest-growing developers in the online gaming industry. Advancements in the mobile and desktop markets with high-quality creations is an underlining factor to the fast-paced development of the company.

Originally founded in 2015, the company has made progress exceptionally fast in order to compete with market-leading software developers. Reinforced by their 100+ plus strong team of igaming experts it is no wonder the company is regularly competing with some of the biggest names in the industry. The customer plays a major role in the Maltese company as they are centred around the development of innovative ideas for slot games.

The growing competition within the market has only inspired Pragmatic Play to achieve their credited success. 2017 saw Pragmatic Play battle hard to receive the title of Software Rising Star category at the EGR B2B Awards. Furthermore, the Malta iGaming turned out to be Pragmatic Play night after winning the Best Digital Company of the Year, Best Gamified Experience Company and Best HR Director of the Year.

What’s more, the company just missed out at the EGR Operator Awards. In consecutive years, 2016 and 2017, Pragmatic Play was shortlisted for Game of the Year, for Hot Safari and Queen of Gold respectively, just falling short of securing the high-status prize.

Pragmatic play catalogue of different casino games is second to none, with an assortment of themes which are bound to create hours of endless enjoyment. Although the company’s main core passion has always been regarded as online slots. Once you’ve given Madame Destiney a go, try out some of their more well-known slots, such as:

Pragmatic Play is people behind this game, and it is they who have gone into great depth to make Madame Destiny the character and the game, have great detail.

From the eery soundtrack to the atmospheric, foggy setting of the game, it is an online video slot that is clearly well-thought-out. The bonus features are triggered in accordance with the narrative of the game with the main character playing a very active role. Madame Destiny’s role in getting you big wins is also a crucial part, with that potential 900x multiplier being an enticing prospect.

Such detail is typical of this developer, with 5 Lions being a similarly formatted game in terms of layout, that also packs a lot of content within the confines of the reels. 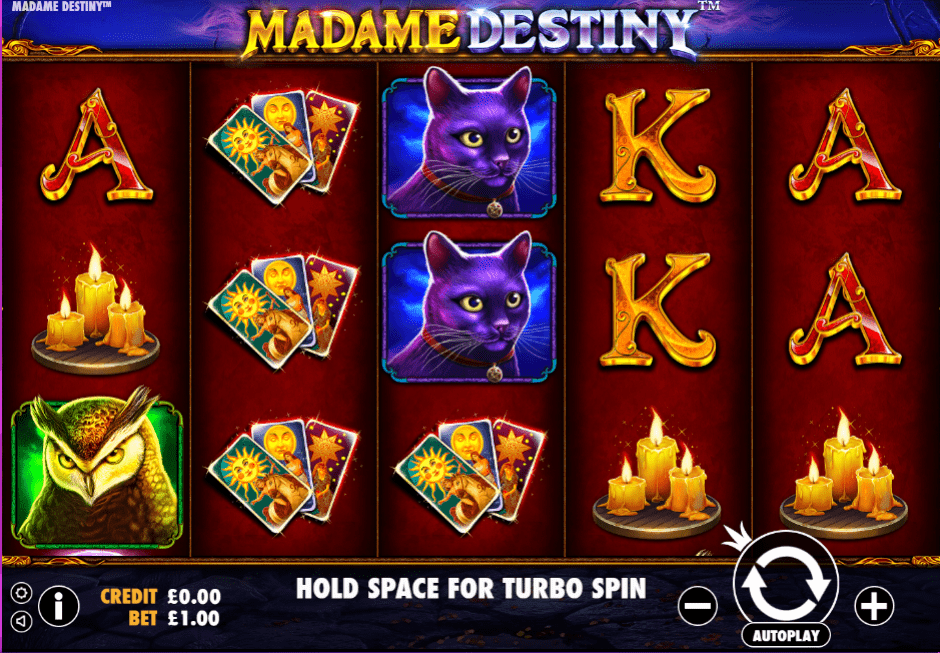 On the reels, symbols are made up of playing cards - A, K, Q, J, 10 and 9 - as well as some more theme dependant relics such as tarot cards, potions and black cats. Look out for candles and owls, too, as all of these symbols really set the theme of this slot game and it’s a theme which is held together well throughout each and every spin.

Madame Destiny acts as the wild symbol in the game that is named after her, meaning that she is able to substitute for all other symbols on the reels apart from the scatter. In this game, the scatter is represented by the crystal ball which can appear on any of the reels. Any win that involves the Madame Destiny wild symbol will be doubled and on top of that, it’s also by far the most valuable symbol that can pop up on your reels.

Landing between 2 and 5 of them on a single pay line will land you a hefty cash prize of up to 900 times your stake - a sum of money we’d all like to see in our future. Furthermore, landing at least 3 of the wilds will initiate a Free Spins bonus feature in which you can spin 15 times. During this round, all wins are multiplied by at least three but can go higher if they involve further wilds. Make sure to learn more about UK slot games and experience magical themes today! 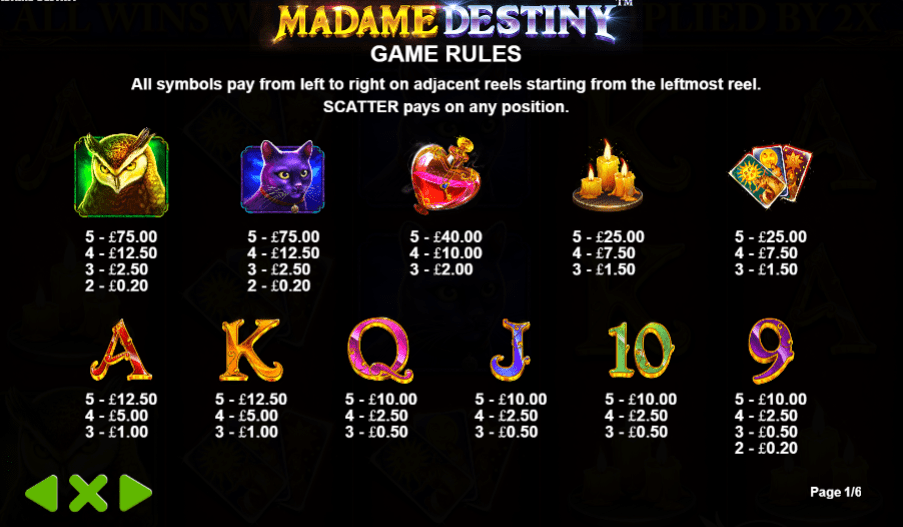 All in all, Madame Destiny is a very solid slot game that, on the promise of a big jackpot alone, makes for a very entertaining play. A lot of thought going into the symbols and the character involved has gone a long way to creating a more engaging slot that some of its competitors, with a well-designed backdrop and set of graphics helping this game rank highly. Mystified by Madame Destiny? why not give Dragons Luck a go?