Aye Aye Captain! Hop onto the Jolly Roger, it’s time for another exciting pirate adventure with Pirates Plenty Battle for Gold. You’ll join Captain Blackbeard and the other treasure-hungry pirates as they search for treasure on mystery islands in this Pirates Plenty sequel.

Pirates Plenty Battle for Gold is a 5 reel, 20 pay line slots online by Pragmatic Play with a pirate theme. The theme is on point throughout with pirate-themed symbols including canons, bottles of rum and gold coins, as well as fun features including a wild island row feature and a battle, spins feature.

About the Pirates Plenty Battle for Gold Casino Game

Sail the 7 seas with Captain Blackbeard and follow the map to find your desired treasure. Will you find the golden treasure chest today? Hit spin to find out!

Pirates Plenty Battle for Gold is a pirate-themed Pragmatic Play slot with 5 reels and 20 pay lines. It’s the sequel to the much-loved Pirates Plenty so if you loved that one then you’re in for a treat.

The design is excellent with the reels set inside the grand pirate shop overlooking the stormy blue sea. All of the symbols are pirate-themed and include bottles of rum, a cannon, a pirate’s hat, a skull and crossbones, pistols, bombs and gold coins.

The Highest Paying Symbol - The most rewarding symbol in this slot is the skull and crossbones symbol. Landing 5 on a line will reward you with 30x your stake.

The Wild Symbol - The monkey is the wild symbol. The wild replaces all symbols bar the scatter to form winning combinations.

Wild Island Row Feature - Whenever a map symbol lands, it gets added to the meter. For every map symbol added, the pirate ship will be closer to its destination. When you have collected enough map symbols, you’ll trigger a new row and will now play with 30 pay lines.

Wild Monkey Feature - In this feature, the cheeky monkey will take all of the lower playing card suit symbols away. You will then perform a respin with the high-value symbols that are left. The wild monkey can be worth up to 4x your stake in this feature.

Battle Spins Feature - Land 3 battle spins scatters to activate the battle spins feature. Once activated, you will be rewarded with a number of free spins. Captain Blackbeard will then throw bombs on the reels and symbols that are hit will remain wild until the feature ends. The bombs can reward multipliers of up to 5x as well as extra free spins. 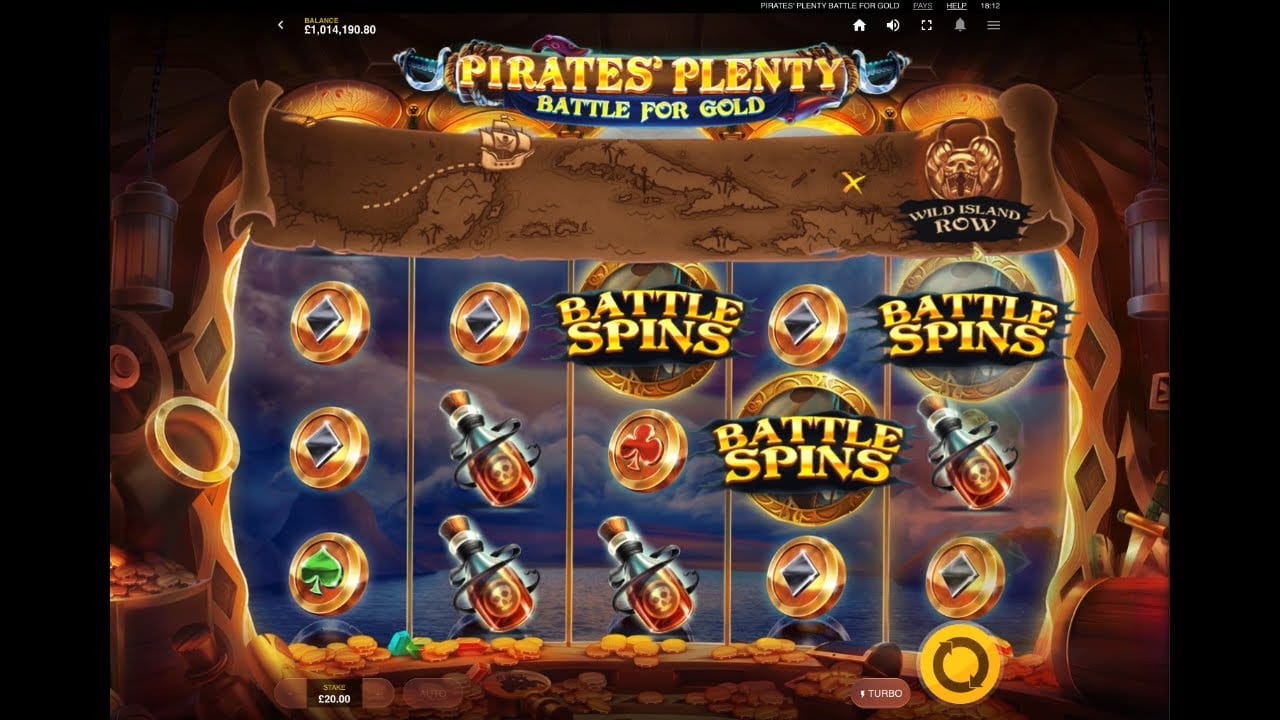 Pragmatic Play is one of the top content providers in the iGaming industry, providing a variety of gaming products including slot games and casino games that are unique, regulated and mobile-focused. Pragmatic Play is passionate about creating the best entertainment possible for their fans all around the world.

They aim to create the most entertaining and innovative gaming experience for all. Every Pragmatic Play has beautiful graphics, cutting-edge technology, and thrilling features. If you enjoyed Pirates Plenty Battle for Gold then make sure to check out the best slot games from Pragmatic Play titles:

Pirate-themed slots are always so much fun and filled with adventure. Pirates Plenty Battle for Gold is full of exciting features and it looks fantastic too. The free spins feature is possibly the best feature as it has the most to offer with lots of extra free spins and multipliers. The top prize up for grabs in this slot is a mighty 5, 000x your stake.