One of the seven seas deadliest creatures, a monster responsible for countless sunken ships — they say that to see the Kraken means certain death unless you’re playing Release The Kraken from developer Pragmatic Play that is!

This 5 reel by 20 payline brand new online slot machine is one of the newer releases from the developer, one that punters can spin from as little as 20p up to £100. We’ll not spoil anything else at this point and instead suggest you read on…

Pragmatic Play – the Developer of Release The Kraken Casino Game

Pragmatic Play is a Malta-based developer, one that is responsible for countless top tier online slot machine games the kind that you can pick up and play all year round without fail! If you ever needed validation that these guys are the real deal, we’d like to point out that they have offices in the UK, India, the Philippines and Ukraine, which isn’t common as far as online developers go.

It’s 2020 now and these guys are offering more than 180 slot machines, and 80 mobile/tablet optimised titles, talk about impressive! Most of their games have well over 16 language options attached to them, making them highly accessible to various folk. Looking to play something else from developer Pragmatic Play? feast your eyes on the following games:

And many, many more! If you are looking for a guide to the best slots click the link above! 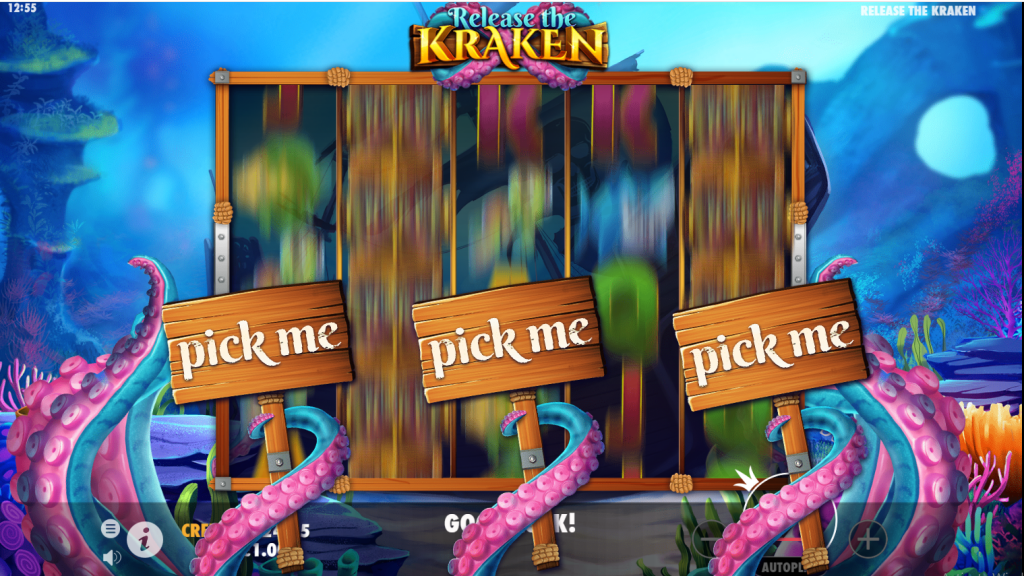 Release The Kraken is a slot machine that’s playable on multiple platforms, the kind that does include mobile and tablet devices! For those that don’t know, the Kraken was said to be a giant squid that lived off the coasts of Norway, a beast that would destroy everything in its path — it was always inevitable that this sort of story would get the online slot treatment.

This Norse mythology-inspired slot machine is playable at a range of stakes from 20p to £100 per spin via desktop, tablet and mobile devices. It features 3 random features in the base game including extra wilds, a 2x multiplier and a 3 reel Colossal Kraken wild which turns other symbols wild.

Since this is a slot based on something ocean-related, you should already have an idea of what symbols are on offer here. You’ll see low value A, K, Q and J royals on the reels as well as a selection of colourful fish, turtles and sharks, each offering something different as far as scores go. One of the best symbols on the board is the Release The Kraken anchor symbol, this will net you up to 25x your stake if you can find 5 in a winning line.

Random spin features will rip through this slot like a strong current from time to time, applying something new to your game each time you spin! This bonus is random, meaning every time you play you’ll have a different modifier.

Release the Kraken features random spins as 3 tentacles appear randomly when you activate them. Depending on which tentacle you select, you will be able to play one of three features:

There is also the Sunken Treasure Bonus game, which is triggered when the bonus symbols appear on reels 1, 3, and 5 and the chest bonus symbol appears on reel 5. From there, you choose one of three chests to reveal your cash prize. If you win a cash prize, you continue picking! When you hit collect, the feature will end.

You can also access Roaming Kraken Free Spins by landing a bonus symbol along with the free spins symbol on reels 1 and 3. The game works the same way as above: you choose chests to reveal prizes until you find a collectible - every pick can grant you 1, 2 or 3 free spins.

Our Take on Release The Kraken Casino Game

Release The Kraken is definitely a slot you will want to voyage on, one that is full of twists and turns that each impact the game differently. The bonuses available here are all incredibly extensive, each offering something different yet familiar in allowing you to make a hell of a lot of money while battling one of the deadliest creatures in existence. Play Release The Kraken today or check out some other unique slots on Wizard, uch as the Beer Barrel Bash slot!