Ancient Egypt provides a rather popular focal point for a number of online uk slots and that is the case here, as this Egyptian theme slot from Playson uses the mystical time period as a source of inspiration. The game itself is a 5 reel and 20 pay line slot that is playable across all the usual platforms - smartphone, tablet and desktop.

On Rise of Egypt, betting starts at 20p and can go as high £100 per spin on this very accessible slot game.

About Playson - the Developers of Rise of Egypt Slots

Rise of Egypt was developed by Playson and this developer has an always growing list of similarly themed slot games.

When it’s a Playson production, you can always expect decent graphics and a theme that is tied in well with the narrative of the slot game. Here, symbols are nicely tailored to the gameplay and capture all of the mysticalness of Ancient Egypt. For other games from Playson, perhaps still using this popular theme, you could check out Legend of Cleopatra as one of the most powerful women in history acts as the main character in your quest for big wins.

So, if you're looking for other Playson' creations click the link to see slot games today. 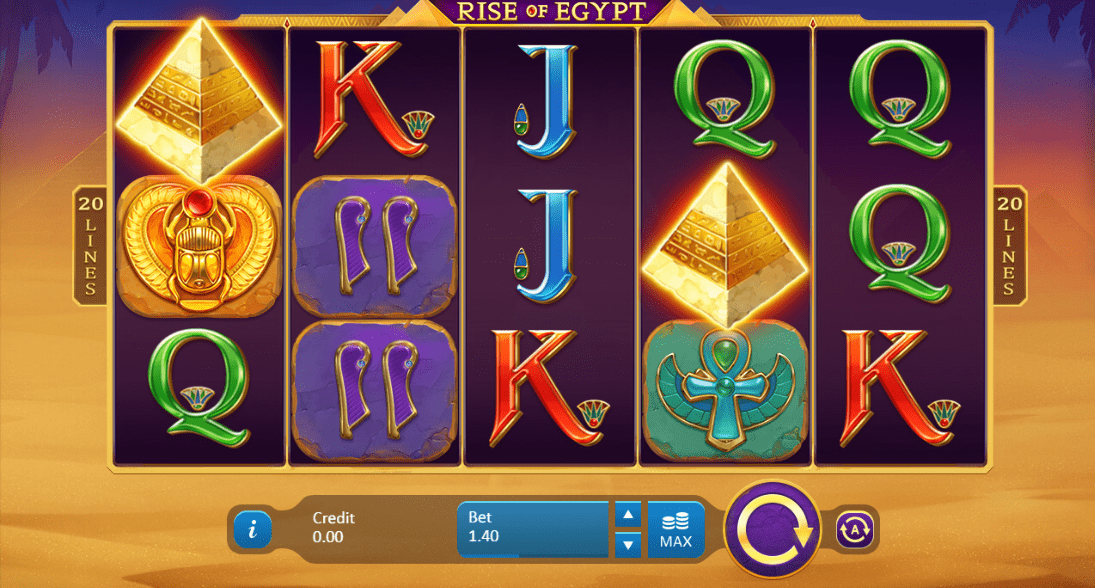 About Rise of Egypt Casino Game

As mentioned and as is obvious from the title, Rise of Egypt is set around the Ancient Egyptian theme and as such, the backdrop consists of sandy planes and sky intruding pyramids. A sunset seems to be edging in, making for a rather tranquil looking and very colourful online slot game, that boats strong visuals. Various top online slots are already available to players, and this is just one of them!

Playing card symbols in the form of A, K, Q and J are reimagined as hieroglyphic style symbols and these represent the lower paying symbols that will end up on your reels. As for the other symbols, they are also very theme relevant and are made up of colourful, gold-tinted, Egyptian hieroglyphs.

An ankh cross, the eye of Ra and the falcon god Horus will pop on your well-decorated reels, but the best of all is the gold scarab beetle which, when either 3, 4 or 5 are landed at once, will land you either 5, 10 or 20 times your stake.

The wild only appears on the middle reel and once it lands, it will expand to fill the entire reel if it is used to make a winning combo. The scatter symbol is represented by a rather impressive looking pyramid which seems to glow on the reels the present. If you are to land between 3 and 5 of these scatters on the reels, you can expect to land between double your money and 50 times your total stake.

Also, when a scatter lands, you will add a free spin to your counting total which is something to keep your own eye on, let alone that of Ra.

The Verdict on this Online Slot

With all things considered, Rise of Egypt is a very solid online video slot game that holds together a fun theme and does so with good graphics.

Nice soundtrack to the game shows just how into detail the developers went here and effective, potentially valuable wild and scatter symbols make for an exciting play. You can also get exciting play at Arcade Bomb.