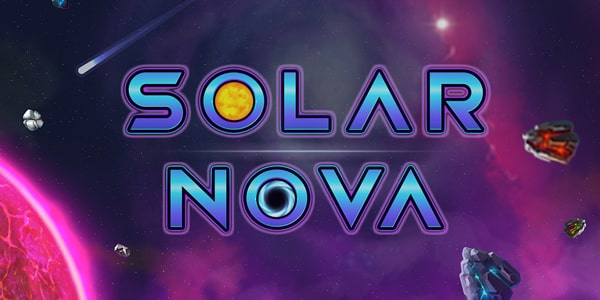 Solar Nova is an online slot developed by Iron Dog Studio. This casino game is played on 9 reels, uses the Cluster Pays system and has a Return to Player (RTP) rate of 96%. It offers 4 Bonus Rounds, Free Spins, Solar Flare and Rocket Wilds. You can play the highly volatile Solar Nova slot at Wizard Slots online casino for a minimum bet of £0.10 up to a maximum of £5.

Solar Nova is the space-themed brainchild of Iron Dog Studio. Although they are a new face in the industry, they have made a name for themselves by releasing various entertaining, fun games.

This slot is played on a 9x9 grid and uses a cluster pay system. Therefore, payouts are awarded when 6 or more matching symbols occupy adjacent positions.

Aside from the tumbling reels, which could provide consecutive wins, you could also trigger the other bonus features, including the Rocket Wilds, Solar Flare and Free Spins features. Some of these features come with multipliers, which have the chance to make a potential win even bigger.

Note the maximum potential win available in Solar Nova is 10,000x your stake. So if you wish to learn more about this intergalactic casino slot game, keep reading or if you’re ready to jump right in, then sign up to Wizard Slots today!

How To Play Solar Nova

Solar Nova can be played on any device, and the first step is to choose your bet amount. The selection ranges from £0.10 to £5 for each spin. This game features a straightforward interface that is easy to use, so setting the bet amount is simple. Once you’re satisfied with your stakes, you’re ready to hit spin.

Winning combinations are formed when 6 or more matching symbols land in adjacent positions on the reels - they can be vertical or horizontal to their neighbour. The cluster pay mechanism allows for the potential of multiple wins from a single spin; the winning symbols disappear and trigger a cascade to fill the gaps, with new symbols entering the reels.

The bonus features also add to the gameplay as they may help provide extra opportunities for wins, should they land in a spin.

Rocket Wild: The Rocket Wild can substitute for all symbols except the Solar Wild.

To activate the free spins feature of this game, you will need to land 3 Rocket Wilds in a single spin, where you will receive 6 free spins.

Note that the Rocket Wilds have increasing multipliers when they are components of a winning cluster. They can also move into one of the empty adjacent reels before the tumble occurs. Any non-winning Rocket Wilds also stay in place during the cascade.

During free spins, the Rocket Wilds stick on the reels, whether part of a winning combination or not, and they move between after each winning spin before the cascade.

Solar Wild: There is a permanent Solar Wild placed at the centre of the grid, and this can substitute for any symbols except the Rocket Wilds.

Solar Nova Feature: During free spins, if the Solar Wild symbol is part of a winning combination, its counter increases by 1. If it is part of 8 winning clusters before the free spins end, it will grow into a 3x3 version of itself for one tumble, potentially forming many combinations with its further reach. After this happens, it returns to its original size and the counter is reset.

Teleportation: The Teleportation feature may randomly trigger during the game. When this happens, it will switch a Rocket Wild with a random symbol, offering the chance to form a winning combo and potentially putting the multiplier in an advantageous position.

Solar Nova is a high volatility slot. It also has an RTP of 96%, which is average for the industry.

Iron Dog Studios decided to go for a space theme for this nifty slot. Solar Nova’s graphics are relatively simple, but with the vibrant colours, minimal background and modest UI, this is a quirky yet attractive slot.

The background is deep space with a subtle purple hue, featuring stars and the edge of what looks to be a pink planet. The darker background and the plain, dark-coloured reels contrast nicely against the bright-coloured symbols.

The animations are also simple but effective; the Rocket Wilds activate boosters shooting out blue flames when moving. Not to mention, the teleportation features a black hole warping open and closed when switching symbols.

The soundtrack is understated, with a futuristic, synthwave type track subtly playing during gameplay.

Solar Nova reminds us of old arcade games in gameplay and appearance. It’s a simple yet charming slot that embodies less is more.

This game features basic yet amusing animations; this helps add a bit of life to the slot. The tumbling reels following a winning cluster also keep things moving and have the potential to provide multiple wins on a single spin.

Solar Nova offers a good selection of bonus features, enough to help give the slot more of an identity, but not so many that the game becomes overcrowded and loses its simplistic appeal. We also can’t forget that they could potentially help you win up to 10,000x your stake!

If you wish to give Solar Nova a go, sign up to Wizard Slots today.

Is it possible to win real money on the Solar Nova slot?

Can I play Solar Nova on my mobile phone?

What is the biggest win available on Solar Nova?

The maximum win available on Solar Nova is 10,000x your stake.

Does the Solar Nova slot have free spins?

Yes, the Solar Nova slot has a free spins bonus that is triggered if 3 Rocket symbols land on the reels in a single spin.

What is the RTP of Solar Nova?