Step into the underworld of the Tokyo night and make the city your own. Compete for the progressively tiered jackpot and rub shoulder with the prime money makers of the Japanese capital. This is your chance to prove yourself as a true master of the oriental online UK slots game scene.

Pariplay is a renowned producer of remarkable products, where they create an experience of engaging entertainment all around. They create online games and systems that add real value to anyone in the Online Gaming Industry.

Pariplay’s people put all their energy into their slot games projects in order to bring entertainment, pure thrills and excitement to unfold right in front of the player’s eyes here on Wizard Slots. 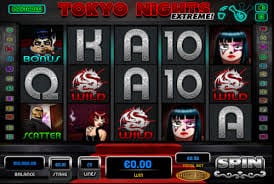 Tokyo Nights is an exciting slot online game that will have you on the edge of your seat with its 5 reels and 25 pay lines. Tokyo nights is set in a nightclub featuring a bunch of Japanese mobsters. The gun baring gangster can randomly appear to add up to 15 extra wilds to the reels.

There’s the “Pick a Drink” Bonus feature where the main character “Mr Big” downs drinks to give you cash prizes. There’s also a Free Spins feature where you can win up to 40 free spins.

Take a virtual trip into the Japanese capital in Tokyo Nights, a 5 reel 25 pay line online slot game. Features on offer include special added wilds, a picks round and a free spins feature that awards up to 40 free spins.

A dark backstreet with neon lights sets the tone on to the reels, joining the A to 10 playing cards are a trio of party people and a DJ up on the DJ booth rocking the decks. The Asian Dragon image is the wild and it replaces all other symbols apart from the bonus and scatter. Land yourself on 5 of these and you will pocket 10 times your stake.

Watch out for the all guns blazing gangster who can appear at random on any spin, as he fires shots at the reels, he turns a random selection of symbols into wilds. Then get this, up to 15 additional wilds can be created! A new pay-out is then made with having these extra wilds in place.

Tokyo Nights comes with 2 main bonus features, which includel; the Pick a Drink Bonus feature, whereby if you land yourself on 3 of the “Mr Big" bonus symbols and you will then trigger the ‘Pick’em’ round. You will venture into a nightclub booth where “Mr Big” the leading man will put down a selection of drinks and each 1 of these represents an award, in turn winning you a prize. The more he drinks the more prizes you will win. Bonzai!

Then there’s the Free Spins feature which will make you want consume even the hottest of Wasabi, should you be lucky and land on either 3, 4 or 5 of the bouncer scatters and you will be given either 7, 15 or 20 free spins.

If that isn’t enough you can re-trigger more free spins as well, giving you up to 40 free spins in total, as you land the awesome “Pick a Drink” Bonus feature from within this games free spins feature.

Tokyo Nights really is a dark and ominous online slot game centred around the criminal underworld of the Japanese capital, Tokyo. Gain the respect of a whole range of fearsome mobsters and spin your way through 5 reels of violence, bloodshed and dodgy deals.

Tokyo Nights has a wonderful atmosphere and have you striving to live that underworld lifestyle you’ve always craved. If you enjoyed Tokyo Nights you should try Ninja Chef.