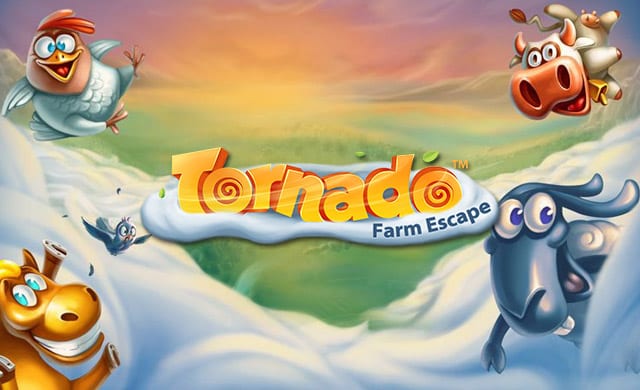 Help the farmyard animals escape from their laborious existence by activating the crazy tornado feature to tear apart the farm. Farm Escape is kooky 5 reel with 20 paylines and endless opportunities to win in this video based online slot game. It's right here at Wizard slots.

NetEnt was founded in 1994 and shows a lot of industry know-how in the big variety of games that they offer. They have collected several awards for their high-quality and innovative games. NetEnt provides flexible digital casino solutions and serve over 170 of the world's most prominent casino operators.

They show a lot of creativity in their collection of games offering a wide range of different themed games that appeal to gamers both new and old.  For more online slot games click Wizard Slots.

Tornado: Farm Escape, as the name suggests, is themed around a tornado going over a farm collecting the farm animals and some objects mixing all together. It has a cartoonish art style to it and the animals seem to rather enjoy the ride in the tornado a lot as they all have big smiley faces. There is a country tune in the background making the setting of the farm complete and engaging.

You will find the animals and the objects the tornado has collected on its 5 reels. There is a suitcase, a radio, an armchair, a boot, a stool chair, a cow, a horse, a pig, a chicken and a sheep, all flying around in the tornado that you can see whirling around in the background. The wild is represented through a TV set. 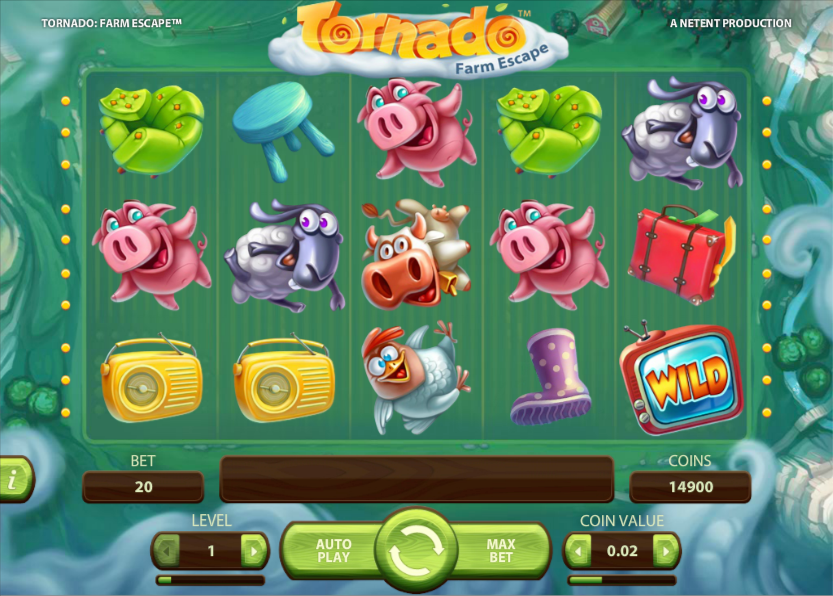 This video slot has 20 paylines and 2 bonus features. Unfortunately free spins are not one of the bonus features. But it offers the tornado feature which is triggered through a hot cloud symbol on reel 1 and a cool cloud symbol on reel 5 in the same spin. The symbol that appears on the second row of the middle reel becomes active. The tornado will now collect all active and wild symbols for further spins and you will be rewarded with a cash prize. It ends when a spin doesn't have any active or wild symbols in it for the tornado to collect.

The second bonus feature gives you the opportunity for bigger cash prizes. The storm feature is triggered randomly and starts from one of the outermost positions on the reels and moves in 1 position at a time in any direction, generating wild symbols until it disappears out of the reels again.

You will have to bet a minimum of 20p or up to £200 to save the animals from the storm. The storm feature allows you to complete many of the paylines rewarding you with big wins. Outside the storm feature bigger wins are rare, but not impossible. However this video slot generates frequently smaller wins.

The aesthetics are quite humorous with the comic animals flying around through the tornado, turning the game very entertaining. The soundtrack adds a lot to its feel and the gameplay experience is enriched through the two bonus features. Especially the storm feature can turn very lucrative and rewarding when it is randomly triggered. Tornado: Farm Escape is very entertaining and gives you some fun variation from other slot games.

Now test your luck further with our Irish Luck Slot.