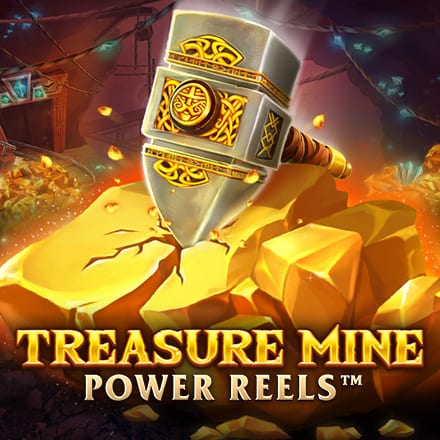 If you’re a fan of mining-themed slots, you should check out the 8 reel, 30 payline Treasure Mine Power Reels free online slots no deposit by Red Tiger Gaming. The game sounds familiar because it is the sequel to Treasure Mine, also released by Red Tiger. It has a higher RTP percentage than the original at 95.75%, but the volatility is different; low to medium at a 2/5.

Of course, this doesn’t make for good news for players who enjoy highly volatile free spin slot games, but we think you’ll find a few reasons to love Treasure Mine Power Reels. The game is playable for stakes starting from 10p to £80 per spin, so start your bets now on Wizard Slots, or keep reading to see what our review entails.

The Treasure Mine Power Reels theme is similar to its predecessor Treasure Mine. However, the game’s action is set inside an enchanting mine complete with gold and jewels. The visuals look mesmerizing, and so do all the symbols on the reels. For example, the different coloured precious metals, the hammer, goggles, lamp, and a miner’s helmet. The hammer rewards the highest payout among them, where 8 on a payline pay 25.6x your stake. Treasure Mine Power Reels looks fantastic on every device, including smartphones, where the visuals are clear from every angle.

How to play the Treasure Mine Power Reels Slot Game

It’s going to be easy to play the Treasure Mine Power Reels slot online once you have registered on a reputable online casino. Here’s how the game works;

The Treasure Mine Power Reels demo is available to play online if you’re looking to practice before playing for real stakes. Wizard Slots offers real money slots ONLY, so if you want to play, you’ll need a minimum £10 deposit your first time signing in to win up to 500 free spins on some slots (Full Ts & Cs Apply).

Now that you have a hang of how to play Treasure Mine Power Reels online, it’s time you knew about the game stats too. We find that the 95.75% RTP is favourable since it inches towards 96%. The low to medium volatility means payouts might occur frequently, but they’ll be of low value. Of course, you’d expect the sequel to come with a much higher mathematical model, but you might find other reasons to enjoy Treasure Mine Power Reels once you scan the table below.

Treasure Mine Power Reels has 4 bonus features to offer, but they’re all centred on the wild symbols. There are 3 main wilds in the game; the Diamond, Miner, and Dragon wilds. All the featured wilds can appear as 2x2 wild symbols, but only one can land per spin. You’ll see what we mean below.

If any 2×2 versions of the Miner and Diamond wilds land, this feature will start. The Miner jumps over the Diamond and starts digging, revealing cash prizes while at it.

The Miner and Dragon 2x2 wilds need to land for this feature to get triggered. The Dragon sends a flame at the Miner, who rushes away, leaving wilds behind him. A payout is calculated with the new wild symbols in place.

The Dragon sends a flame at the Diamond in this version of the Treasure Mine Power Reels wilds feature. As a result, mini wilds fall onto random positions on the reels. A payout is calculated before the dragon blows fire at the Diamond again and unveils bonus wilds.

This feature is the best among the wild features because you can land 2×2 Dragon, Diamond, and Miner symbols on a single spin. This time the Dragon fires flames at the Diamond while the Miner digs out prizes from the Diamonds. The next time the Dragon throws flames, it gets directed at the Miner, who leaves behind a trail of wilds as he escapes.

Should you play Treasure Mine Power Reels?

Treasure Mine Power Reels is an exciting slot to play, so it deserves a spot on your slots bucket list. The visuals look fantastic, and the soundtrack adds to the gameplay’s excitement. However, the RTP percentage could have been higher than 95.75%, and the volatility should have been higher. The bonus features are some of the most unique wild features most players will come across. It takes a few tries to understand what each feature offers, with the Dragon, Diamond and Miner Wilds feature being the best one of all. Treasure Mine Power Reels is an exciting slot, but we think the game could have done better as a sequel, so we rated it 5/9.

It’s time we looked at some frequently asked questions on the Treasure Mine Power Reels slot.

What is the RTP of Treasure Mine Power Reels?

The Return to Player percentage or RTP refers to how often a casino game is likely to reward payouts to a gambler in a single session. For example, the Treasure Mine Power Reels RTP % is 95.75%, so it’s almost 96%. Therefore, for every £100 wagered in a single session, players are likely to win around £95 to £96. This also depends on the low to medium volatility, which awards payouts often but in low values.

Can I play Treasure Mine Power Reels for Free?

Yes, the Treasure Mine Power Reels demo is available to play online if you were hoping to practice before making real bets. The demo gives you an idea of how the gameplay works, how to trigger the bonuses, etc., which will be helpful for newbies or casual players.

Try not to spend too much time on the demo, though, because playing Treasure Mine Power Reels free won’t have any cash returns. Instead, you’re better off playing on a real money casino like Wizard Slots. If you register and deposit a minimum of £10 on Wizard Slots, you can win up to 500 free spins on top slots like Starburst (Full Ts & Cs Apply). Wizard Slots can also offer more than just one Starburst Slot, on our site you can also find the blazing Starburst XXXtreme slot.

Can I play Treasure Mine Power Reels on mobile?