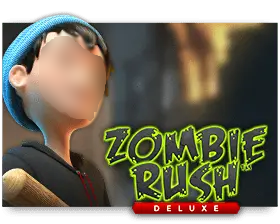 Zombie Rush Deluxe is a 3D online slot created by Leander Games. This slot is built on 5 reels and 3 rows with 20 paylines. This slot not only has excellent 3D graphics, but it also has a potential max win of up to 1,500x your stake. Zombie Rush Deluxe also has medium volatility and a Return to Player (RTP) rate of 96.02%. The stakes range from a minimum of £0.20 to £200 maximum.

These features include transforming wilds that can turn other symbols into wild symbols, re-spins and a Free Spins feature. Zombie Rush Deluxe slot is available on all devices, including mobile devices, for a minimum of £0.20 up to a maximum of £200 per spin.

The RTP rate is 96.02%, slightly above the industry average, and the volatility is medium. In addition to a wild feature, this casino slots online offers a Free Spins round, respins and the 'Find Claire' bonus round - one of its most enthralling features.

How To Play Zombie Rush Deluxe

This slot has 5 reels and 20 fixed paylines. So, to land a winning combination, you have to land 3 or more matching symbols starting from the leftmost reel. But, before you begin, you must place your bet choosing from a minimum of £0.20 up to a maximum of £200 per spin.

Wild symbols are barrels of radioactive liquid that can substitute any other symbol in the game except for the bonus symbols. This symbol, however, will also turn any other matching zombie symbols radioactive and wild if it lands above a zombie on the reel.

As a result, you could potentially land bigger wins than you could with your standard symbols. In addition, landing 5 wild symbols in a row awards 1,500x your bet, which is the game's biggest win. 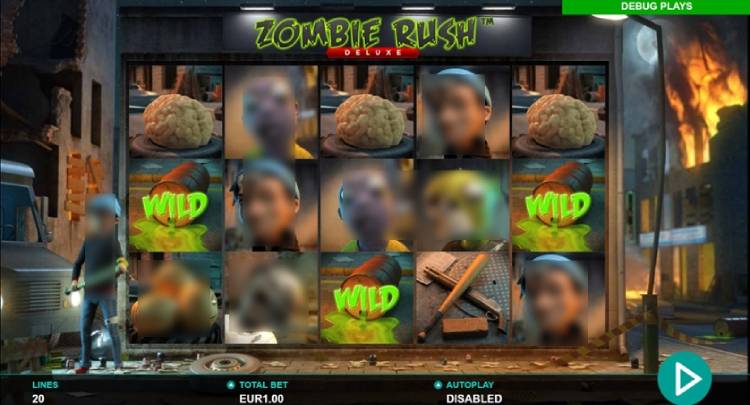 The Zombie Rush Deluxe slot has 4 bonus features. This slot's wild symbol has another function. A wild symbol landing on top of a zombie opens up a special feature.

If a wild symbol lands on top of a zombie, it causes the radioactive liquid to fall on it, turning it into a wild symbol. Additionally, all matching zombies elsewhere on the reels will turn wild as well.

To trigger this round, you must land the Free Spins scatter on reels 1, 3 and 5 on the same spin. This will activate 10 bonus spins. One notable thing with this round is that all the wild symbols that land appear stacked. This feature also has the Nuclear Zombie feature, which can shine with its stacked symbols.

Whenever you land a 2, 3 or 4-of-a-kind winner, you may be awarded a re-spin with the winning symbols locked in.

This feature is triggered when you land the bonus symbol on the 3 middle reels in the same spin. Here, Max goes out to try and find Claire. Max will open doors in search of Claire, and behind the doors are cash prizes or keys to help you unlock the next doors.

If behind the doors you find Claire, you'll win bigger cash prizes, including the prizes you have been accumulating. But, if you find a zombie, the feature ends. 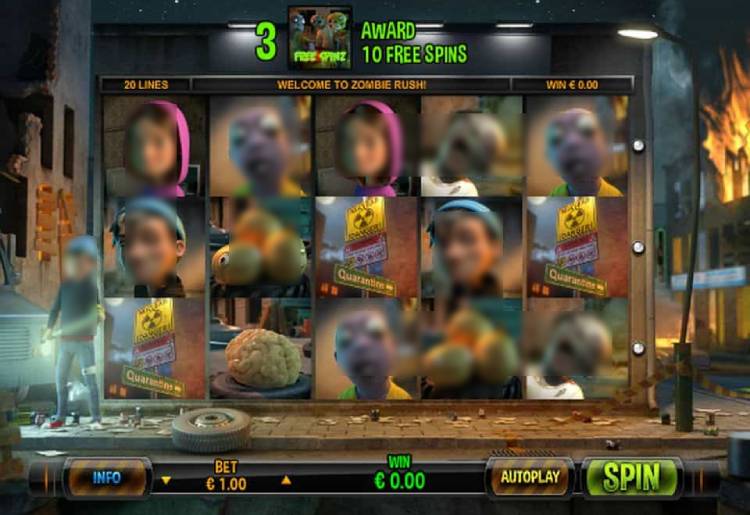 The Zombie Rush Deluxe is an online slot with an RTP rate of 96.02%. The volatility is medium.

The Zombie Rush Deluxe slot has excellent graphics that feature 3D animations. The Zombie Rush slot follows the adventures of a boy named Max as he navigates a zombie-infested world in search of Claire.

This slot features amusing rather than scary zombies, giving this game a more humorous feel. The reels are set against the ruins of a backstreet where you will find radioactive signs, weapons, brains, zombies, humans and zombie-like creatures.

While the sound effects and music are well done, they may not be entirely appropriate for this slot's theme. Instead, they are upbeat and sound more like they should be in an arcade game. 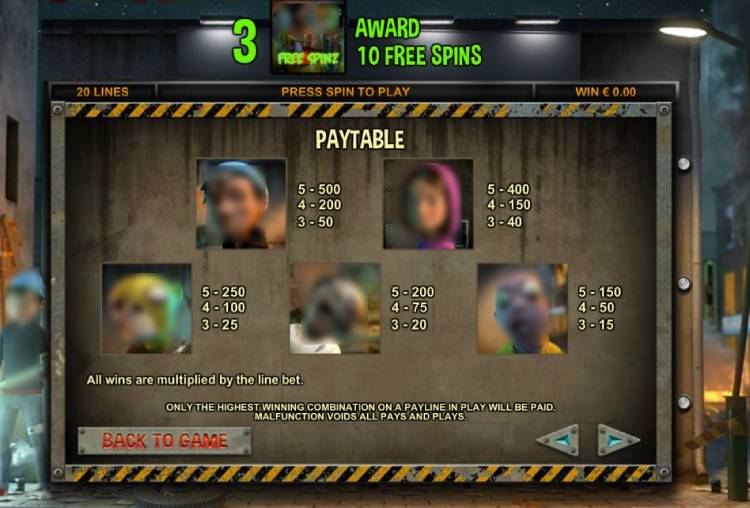 With its decent theme, design, and bonus features, such as the Free Spins feature, this slot’s gameplay stacks up well. The inclusion of the Nuclear Zombie feature, capable of turning matching zombies into wild symbols, really helps make this a decent slot game. In addition, the game's graphics and animations further enhance the gameplay.

There's a lot to like about this title, and we think if you are a slot player who prefers games with a medium level of volatility and high-definition graphics will appreciate it.

Can you play the Zombie Rush Deluxe slot on a mobile phone?

Yes, you can play the Zombie Rush Deluxe slot on all mobile devices and operating systems that support HTML5 software.

Can I win real money on the Zombie Rush Deluxe slot?

What is the RTP of the Zombie Rush Deluxe slot?

What is the biggest win available on the Zombie Rush Deluxe slot?

The max win on the Zombie Rush Deluxe slot is 1,500x your stake.

Does the Zombie Rush Deluxe slot have free spins?

Yes, the Zombie Rush Deluxe slot has the Free Spins feature offering up to 10 bonus spins, which you activate by landing 3 or more bonus feature symbols.