Oi Son, you’re nicked! Join the hot pursuit in Cops and Robbers, the copper and criminal themed 5 reel classic. Bring criminals to justice or flee the law as you match the clues and combinations to accumulate your bounty in this exciting online UK slots.

Cops and Robbers is a new online slot from Microgaming. If you haven't played Cobs & Robbers when you were a child, then you've missed out on a fantastic game that is loved by both toddlers and pre-teens! You get the thrill of choosing who will be the good guys (cops) and who will be the bad guys (robbers).

Then, you get to take up the whole playground where you can hide behind bushes and benches until the cops arrest all of the robbers, or the robbers get all of the jewelry that they could find while evading all of the cops that they would chase them!

But not to worry if you didn't get to play it when you were a kid. There's a chance to experience that thrill as an adult when you go onto your laptop, tablet, or smartphone, and turn on the online slot games based on the game itself at >Wizard Slots.

Developed by the brilliant minds behind Microgaming, there's an adult element that won't make you feel like your 5 years old that's placing a lot of bets on this game. You really get the feeling that you're playing a classic video slot game with all of the cherries and oranges that appear on your 3 reels, with only 1 pay line which you don't often find most new slot games nowadays.

Furthermore, you'll get to see all of the cops and robbers running around on your screen that will really make you feel like you're back on the playground again!

About the people who made Cops and Robbers

If you haven't heard about Microgaming before, then it's safe to say that they are developers that you can fully place your trust in when it comes to smooth gameplay, clear graphics, and fun entertainment!

Why is that? Because it is one of the oldest and renowned developers that produces top quality games to casino suppliers, both online and land-based.

How old makes them one of the oldest? Well, let's say that they have been creating the best slot games since 1994. Around the time when the internet was still young! And if that doesn't impress you, Microgaming broke the record in online gaming news for paying out over $100 million non-progressive jackpots within a span of 10 years.

Developing a wide variety of games such as Sic Bo, Baccarat, and the old-but-gold Blackjack, Microgaming has gained a high reputation amongst the casino gaming community. Overall, players can be sure that the developers will always deliver fantastic results, even Cops and Robbers! 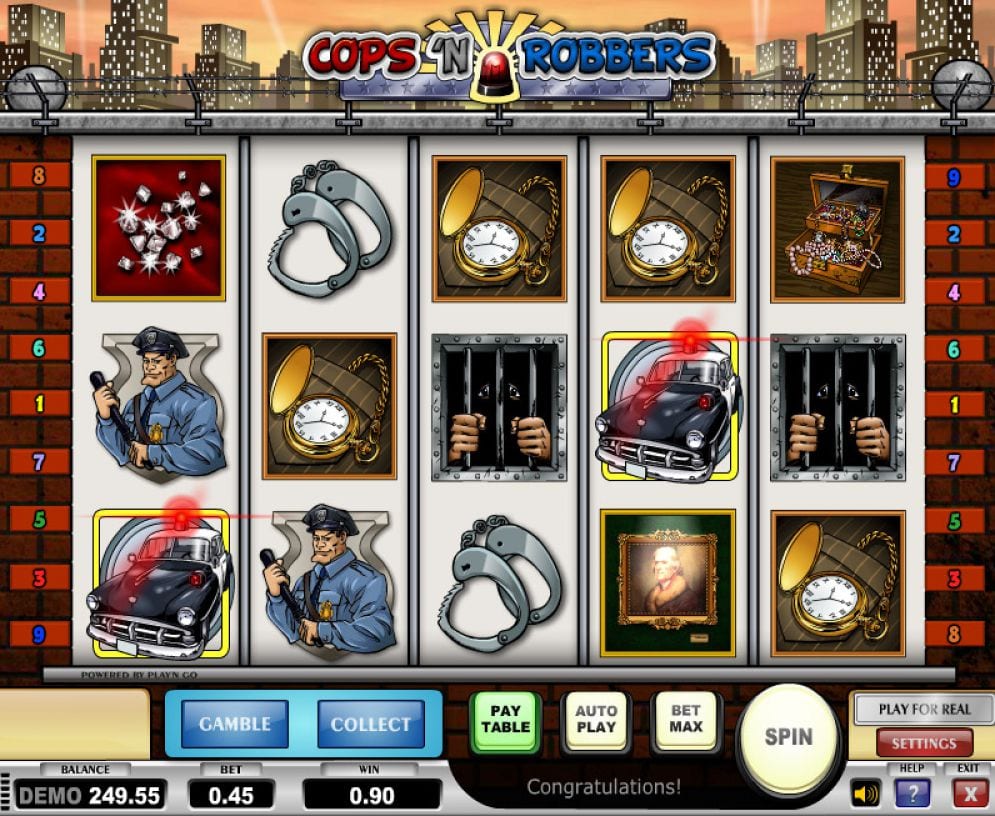 Cops and Robbers: Millionaire row is an adventurous casino slot, themed around robbery and police trying to catch the bad guys. The art is presented, just like its first title, in a colourful comic style. You will see the entire background covered in dark blue, expressing the time of the robbery, at night.

On the five reels and three rows you will be presented with the A to 9 playing cards symbols. You also find sticks of dynamite, a safe, a copper and a pile of gold. These symbols will be used to match one or more of the 20 paylines that this slot online has to offer.

The bulldog is the wild symbol in Cops and Robbers Slot and can pay you up to 25 times your total stake. But there are plenty of other bonus features in this game. Four of these features will be triggered randomly in the base game and can be one of the following: The Rewind which will nudge one or more reels upwards to create a winning line. The Fast Forward does the same in the opposite direction as the rewind, nudging one or more reels downwards. The Reel Morph changes some symbols into others to form a winning combination and create a new bonus payline. The Bonus Wilds will add extra wild symbols to the reels and your spin will be reevaluated and vetted to search for any hidden winning paylines.

You should look out for the bonus symbol as this will trigger the main feature. When this symbols lands on the odd numbered reels on the same spin you will be taken to the Street Bonus feature. This is an exciting board game style mini game. You will have to roll the dice to move the robber along the board, collecting free spins and other thrilling extras. If he lands on a wild bonus square you will increase your wild extras in the free spins rounds. This will give you sticky wilds, domino and exploding wilds, turning the adjacent positions also into wilds, and expanding wilds that can fill whole reels. Once the robber gets to the green corner of the board your free spins rounds will start with all your extras that you collected.

Microgaming has embedded the perfect idea to also include a set of BONUS FEATURES, including 1 that triggers a new game that could leave them with the chances of making big money at the end of it. With the help of the SCATTERS that activate that bonus round that will keep you on the edge of your seat. Cops and Robbers Bonus game includes features such as:

Once you've completed this game, you'll feel like you don't want break time to end, and to keep playing this classic childhood game with an adult gimmick!

There is one last feature in this game. It is a bumper progressive jackpot prize. If you collect five golden keys during the Street Bonus feature and your free spins you will trigger a big win. To take part in this robbery you can place bets for as little as 60p or up to £40 pounds and you will be immersed right into a world of exciting gameplay and thrilling features.

Cops and Robbers offers an adventurous gameplay experience with lots of features to discover. With the exciting Street Bonus feature, it adds a good game feel to this online slot and you will be able to make some big lucrative win. The random bonus features that can be triggered during the base game can make your spins very profitable and adds a lot of action to the game. If you enjoyed Cops and Robbers then you might also like Mega Love