Here's a great game form the team at IWG and now which we've all enjoyed here at Wizard slots.

IWG have been at the top of their game within the casino gaming industry for more than 12 years now and as a result, they have formed over 250 games for the leading lottery and gaming operators.

With this kind of experience comes a great establishment and this is proven when we learn that the company has data centres in the UK, Gibraltar, Canada and North America

Our most popular slot game is starburst slots.

If you want to play casino slots online then gone are the days of tradition and classical formats, IWG bring you a fresh and modern look on slot-games, by replacing this structure altogether, with a dice format instead! It is also an instant-win format, so already you will be able to experience a different from the traditional slot-game!

These vibrantly coloured 3-D blocks are very suggestive of the classical Tetris game, but this game isn’t about making the shapes fit to eliminate the gaps. Instead, you will be destroying these blocks, the more clusters the better as this will accumulate your points even higher!

With each bet, you are given 8 rolls of the dice and after each roll, the colour of the face of the dice changes, which then removes the corresponding colours from a zone called the cash buster zone. Therefore, it’s important to cluster the colours together as much as possible as the rest of the same colour in the grid will be destroyed too, making more room for other colours.

This is an invaluable feature as it means you will reach the cash buster zone more often, meaning more frequent pay-outs! The coloured blocks all have their own meter to fill too, but these can only be filled when you remove the colour from the cash buster zone. 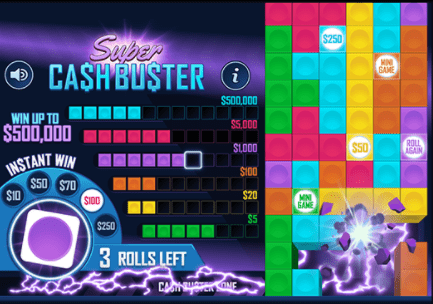 There are other extra game features to keep your eyes peeled out for along the way. Filling the coloured blocks meter isn’t the only way to win instant prizes as you can also destroy blocks that contains the words ‘instant win prize’ and as a result, you will be rewarded with the amount shown on that block. There is also an ‘extra roll’ block and destroying one of these will provide you with an extra roll as well as destroying a block with a prize amount on it – so double result!

The decision to implement a dice structure of the game is the most refreshing part of it all as no longer are you spinning the reels, as you get with other countless slot-games, but instead you are given a different way to play the same game, but the same outcome is presented, the potential to win big, if the dice are on your side!