Aliens was a slot game by NetEnt adapted from the 1986 movie, Aliens. It featured 5 reels, 3 rows and 15 paylines. It also had a Return to Player (RTP) rate of 96.4% and medium volatility. Its bonus feature included 3 levels; Search, Encounter, and The Hive. The stakes ranged from a minimum of £0.15 to £150 maximum.

The 1986 movie Aliens was a blockbuster hit with sci-fi movie lovers. So, naturally, NetEnt adapted it into a fantastic slot and brought it to players. Unfortunately, however, this slot game was discontinued in 2017 and is no longer available on slot website Wizard Slots.

The Alien slot was playable across 15 paylines, 5 reels and 3 rows.

To play Aliens, you had to place your bets from a minimum of £0.15 to a £150 maximum. The maximum potential payout was a jackpot of 1,000x your stake. Instead of regular bonus features like a Free Spins feature, this slot had a bonus feature with 3 levels: Search, Encounter, and The Hive.

Moreover, the Aliens slot had an above-average RTP rate of 96.4%. The volatility was medium.

How To Play Aliens

The Aliens slot was a branded slot featuring 5 reels, 3 rows and 15 fixed paylines. To play Aliens, you had to place your stakes choosing from a minimum of £0.15 to £150 maximum bet per spin. Then, press the Spin button.

To form winning combinations, you had to land 3 or more matching symbols on active paylines, starting from left to right. The most rewarding symbol was the red alien. It could award up to 1,000x your stake for a 5-of-a-kind combination.

Like most uk slot games, the Aliens slot had a wild symbol based on the Weyland Yatuni Corp logo. It could replace all other symbols to help you form winning combinations. However, it would only substitute for the combination with the highest potential payout. 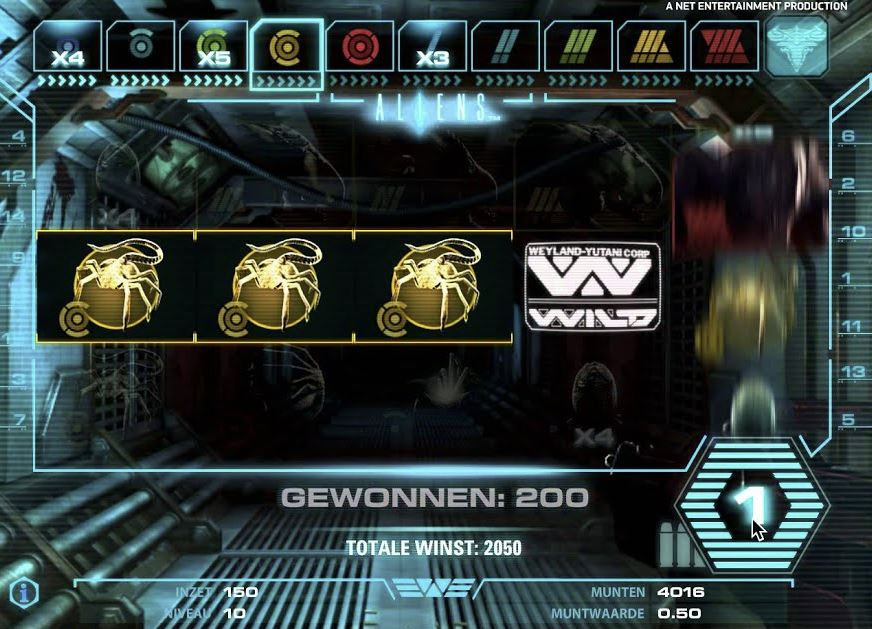 The Aliens slot had 3 bonus features.

Level 1- Search: The Aliens slot had an Alien Activity metre to help you receive multipliers. In the first level, fill the metre with 9 selected symbols that were part of a winning combination.

Level 2 - Encounter: The second level of this bonus feature allowed you to navigate a dark ship passage. Aliens would try to attack you, so you had to shoot them.

This level also featured wild symbols in every reel. Moreover, the multipliers you collected from the first level would roll over to the second level. You could potentially rack up to 6x multipliers.

If your ammunition ran out, you could be able to obtain more if the ammo clip symbol landed on the centre reel. If this happened, you would receive extra re-spins and be able to continue shooting at the aliens.

Level 3 - The Hive: The Hive was the last bonus game level and would be activated if you cleared all the aliens on level 2. Success relied on random grenade strength.

You would then receive 5 bonus spins, and you had to throw a grenade to the Hive with every spin. The damage you do to the Hive would depend on a combination of the strength of the grenade and the multiplier. The stronger they were, the more damage they could do.

The bonus round would end when you run out of ammunition.

The Aliens had a high RTP rate of 96.4%. The volatility was medium.

The Aliens online slot looked nothing like your typical online slot game. If you are familiar with the 1986 movie, Aliens, you would immediately notice its elements and shots from the film in this slot.

The reels were set against a scene from the movie. The reels were a technical interface that looked like the screen of one of the Marines. Whenever you cleared a level, an automatic voice over would alert you.

There was no typical soundtrack except for the machines' pinging and ringing. However, the sounds did add to the tense atmosphere of isolation the slot created.

With its sci-fi/horror inspiration, Aliens slot took you to a dark foreign planet in pursuit of invasive aliens. In terms of gameplay, this slot game was highly unconventional and remarkable. Its features consisted of engaging and 3 immersive bonus levels.

Aliens took slot games to a new level with breathtaking graphics and first-person shooter-style animations. Overall, it was a pretty decent and exciting game; unfortunately, it was discontinued in 2017.

What is the RTP of the Aliens slot?

Can you play the Aliens slot on a mobile phone?

Yes. You could play the Aliens slot on a mobile device when it was still available.

The Aliens slot had a maximum potential win of up to 1,000x your stake.

What's the volatility of the Aliens slot?

Aliens was a medium volatility slot.

What's the minimum bet on Aliens?

The minimum bet amount for the Aliens slot was £0.15.