Here's a new Disco themed online slots game form the team at ISoftBet and one which we think will have you dancing in the aisles. Disco Double is a grooving adventure into a world where the party just never ends. 5 reels of purple mayhem creates that nostalgic feel of the disco hall that you just cant seem to stay away from.

ISoftBets aims to reach the lead of the online casino industry by releasing slot games the players will find entertaining and most of all, profitable, so they will return repeatedly to their carefully developed portfolio. The complex themes and features they create, along with the impressive graphics used, are the elements which attract players to their slot games uk.

Disco Double is perfect for those who are nostalgic of the 1970s disco era, and want to be engulfed by the fun and rhythmic atmosphere of a disco club, while also winning prizes. Try this game at Wizard slots!

Double Disco is a rather classic slot game, reminiscent of the original casino slot machines, but it also has an original touch, by exploring the disco scene of the 70s. Vibrant colours, energetic music and disco balls are just some of the elements which characterise this upbeat movement. It is easy to be attracted to the intense rhythm and find yourself on the dance floor, and there’s nothing wrong with that. Disco Double is your opportunity to experience the disco phenomenon, while spinning the reels and having fun.

This slot game has 5 reels and 20 fixed paylines for you to enjoy with every new spin. The background music will have you moving in your chair without even noticing and the bright purple background will attract your attention to all the wins that are awaiting. The graphics are flawless and the overall design looks very sleek, so it’ll be a pleasure to play. You can bet between 0.01 and 1.00 credits per spin, after which all there’s left to do is get on the dance floor.

The Wild Card substitutes any other symbol besides the Scatter, in order to form more winning combinations. The Scatter of this slot game is represented by the Logo symbol, and by spinning 3 or more of them anywhere on the reels, you win 10 Free Spins.

However, bear in mind that the Free Spins cannot be retriggered, so you have to make the most of them. During this mode, whenever a disco ball symbol lands on reel 3, the current total win is doubled. 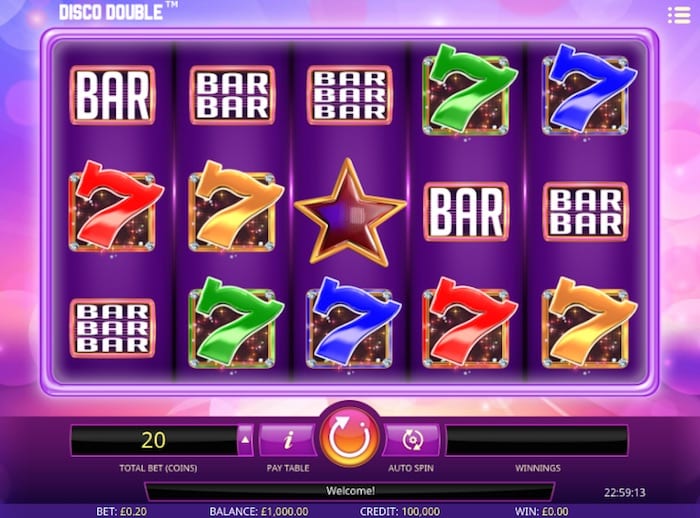 The maximum payout you can possibly get during one spin is that of 10.000 coins, which is awarded when you spin 5 Wild Cards anywhere on the reel. However, if it so happens that you make more than 10.000 coins during Free Spins, those payouts are canceled.

Disco Double is a fun turn back in time, to the disco era, when upbeat music and bright colours are everywhere, and, in this case, so are big wins. The visual graphics, sound effects and features all build an atmosphere you won’t want to leave.