Eye of the Amulet

Eye of the Amulet: a 40 pay-line affair that is elevated by its ancient Egyptian theme. Ancient Egypt is a theme of slot that is quite popular in terms of its drawing power, and with good reason. The Egyptians knew that gold was precious and now you do to thanks to this slot from developer iSoftBet.

This isn’t iSoftBet’s first go in this theme, Pharaoh's Lotus and Pharaoh's Treasures were the developers previous experience with this theme. Both of these games were fairly successful, and with every new game comes new ways to innovate on-top of that base.

iSoftbet’s tagline is as easy as it comes: simply play. This is a motto that they live by with their various online slot titles, no messing around, just you and the slots. This attitude has led them to various degrees of success in a variety of different gaming titles, from the space action thrill-ride Booster, to the online slot adaptation of the hit American TV series 24. 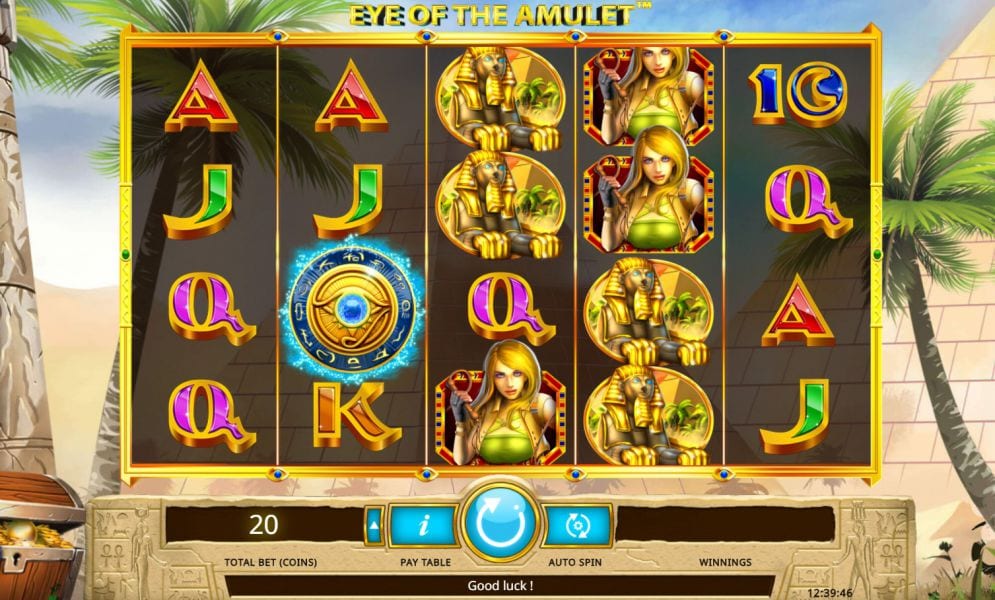 Eye Of The Amulet has a fixed pay-line total of 40 pay-lines, which is just enough to warrant excitement depending on the players stance on pay-lines. We like to think that players will get what they put into a slot like this and if they haven’t played a slot with more pay-lines then this could be a great starting point.

Bets range from 0.01 to 1.00 with every spin, so there's plenty of scope for a variety of different play styles. Many of the symbols you see on these reels happen to be pre-stacked thus allowing some rather big scores should you possess the luck of the gods.

There are a variety of low value symbols in this slot also, which will keep the money rolling in- between big wins. Every symbol in this slot have a different numerical based value depending on how many symbols are implemented within the winning pay-line. Players who have played any other game in the iSoftBet catalogue will find similar footing here.

Wilds, scatters, free spins and an auto-play mode can all be found in this slot. Players who are looking at getting the highest cash pay-outs on the board should look at these bonuses as more of a requirement and less of a suggestion. The gods will be shining brightest on those that manage to impress them, so repeated spins on a variety of different starting bets will be key at finding a strategy moving forwards.

Eye of the Amulet puts you in the shoes (flip flops in this case) of the ancient Egyptians and their sophisticated ways. Developer iSoftBet have clearly done their homework when it comes to the theme and overall presence of a slot like this.

Players should definitely go out of their way to play this slot. Will you discover the secrets behind the Eye of the Amulet? Time will tell but we’d like to think that you will try and succeed in your efforts. All you need to be is willing. 8/10

If you enjoyed playing Eye of the Amulet you will also like Scrooge.