Begin the search across the solar system for the mythical Nebula Stones, as you travel through space on this 5x5 grid. As you play you’ll find yourself progressing through the games own levelling system, which is just one of many opportunities to get additional rewards from the game as well as adding to the entertainment of the game.

Deposit now and begin your journey through the vast space collecting the precious gems as you go in one of the best casino slots on the internet.

This epic slot has been developed over at Skillzzgaming, an exciting new company to the online slot games UK market, founded only in 2014. They aim to take the most popular genres from the casual gaming world and create fresh, original gambling games.

Although only having released a total of three games to date their ideas have certainly resonated with the community as they continue to gain popularity. Skillzzgaming’s alternative two titles are Mega Money Rush and Fruit blast.

Set in a vibrant corner of the galaxy Gems Odyssey is easy on the eye and very visually appealing to play. The game is centred around a match-three style of gameplay and you can win by filling gem bars with seven gems by blasting the specific clusters of gems.

With two game modes to select from, Artificial Intelligence which will enable the game to blast clusters automatically or Manual which enables the player to manually select the cluster they would like to blast. This slot offers a wealth of additional bonus features, such as:

Levelling up – Each tile blasted rewards you with one point towards the next level up (not including Nebula or Jackpot tiles). Upon reaching the required points you will progress to the next level.

Nebula Stones – There are four types of Nebula Stones each with a different range of rewards; Common, Rare, Epic and Mythical. They are granted upon successfully blasting a cluster of Nebula Stone tiles. Once earned they are then stored in the players inventory until levelling up to the next level where they are then exchanged for monetary rewards.

Second Chance Feature – This may be randomly activated on non-winning games and trigger one free game for the player. This feature cannot be triggered again while playing a second chance game.

Jackpot Feature – Blasting a cluster of jackpot tiles will grant a reward equal to x1000 the bet value. 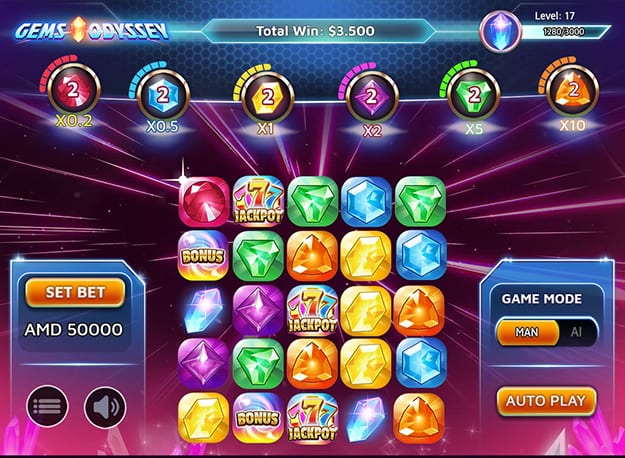 All in all, Gems Odyssey has a well-designed theme with the graphics to bring it to life. The game’s manual mode offers a much more interactive role, something that standard slots can’t offer, this gives back a degree of control to the player to have an influence on the eventual outcome.

This meaning the game requires a mixture of both skill and luck to be successful on reaching the more lucrative pay-outs. With a range of highly rewarding bonus features to seek out you’ll be entertained through-out, and if you liked Gems Odyssey then you might also like Rainbow Ryan.