Golden Macaque is an online slot from Rarestone Gaming and Playtech and has an RTP of 96.73%. It’s a high volatility slot played on 5 reels and 243 paylines. There are multiple bonus features which have the potential to pay out the maximum win of 2,000x your stake.

Golden Macaque is a high volatility slot from Rarestone Gaming, a developer working with iGaming giant Playtech. It is part of the Fire Blaze series, all set in ancient cultures and civilisations, including the ‘Hold & Respin’ feature.

This slot’s theme is ancient China and the Chinese Zodiac. It is steeped in mysticism, using symbols and sounds associated with Eastern culture.

This slot has an RTP of 96.73% and boasts a number of bonus features such as Wilds, Scatters, Gong Feature and a Fire Blaze Hold & Respin Feature, which has the potential to help you win up to 2,000x your wager.

If you wish to try this slot today, sign up to Wizard Slots casino online and be playing in minutes.

How To Play Golden Macaque

Before spinning the reels, you have to place your bet. The stakes range in Golden Macaque is from £0.20 to £5. Once you have selected your bet amount, you can hit the Spin button to get started.

Winning combinations in this slot machine are made by matching 3 or more symbols along a payline; the card values A, K, Q, and J are lower-paying symbols. The higher-paying ones are the picture symbols represented by animals of the zodiac; these include a rabbit, a goat, a pig, a tiger, and a rooster.

The Gong symbol acts as the Scatter; it is also a high-paying symbol, should 3 or more land on a payline. There’s also the titular Golden Macaque symbol which acts as the game’s Wild, and the Drum, which is the bonus symbol capable of triggering the Fire Blaze Hold & Respin Feature.

In the base game, multiple bonus features have the potential to help you form winning combinations or potentially bolster the payout of an earned win.

Wild Symbol: The Golden Macaque is this slot’s Wild. It can substitute for any other symbol in the game except the Scatter and Drum symbols. The Wild only appears on reels 2, 3, and 4.

Scatter Symbol: The Gong symbol acts as the Scatter in this game. Landing 3 or more anywhere on the reels in a single spin triggers the Gong Feature.

Gong Feature: Once activated, 4 Gongs will be displayed, and you must choose 1. The Gong can award the Fire Blaze Hold & Respin Feature or 6 extra spins. The 6 extra spins are made under the same bet amount as the triggering spin, and the low-value A-J symbols will not land during these spins. Landing 3 or more Scatters will award 6 more spins. The Fire Blaze Hold & Respin Feature cannot be triggered during these extra spins.

Bonus Symbol: The Drum symbol triggers the Fire Blaze Hold & Respin Feature. When 6 or more Drums land in a single spin, the bonus round is triggered.

When 6 or more Drum symbols land in a spin, this bonus round is activated, awarding you with 3 bonus spins.

The Drums that triggered the feature is held in place for the duration of the bonus round. Any subsequent falling symbols (Drum, Golden Macaque or Star) will also end up stuck in place and reset the spins to 3.

The Drums are assigned a value to pay out or a Star icon; this icon will award one of the fixed jackpots seen on top of the reels. The jackpots are:

You can only win the Grand jackpot if the reels are filled before the bonus round ends.

The Golden Macaque can also land during this round. When this occurs, the value of this symbol is determined by adding all the values of the already landed Drums together. There is also the chance of any previously landed jackpots and Golden Macaque’s values to be added to the newly landed one.

The bonus round ends when the Grand jackpot is won, or you run out of spins. 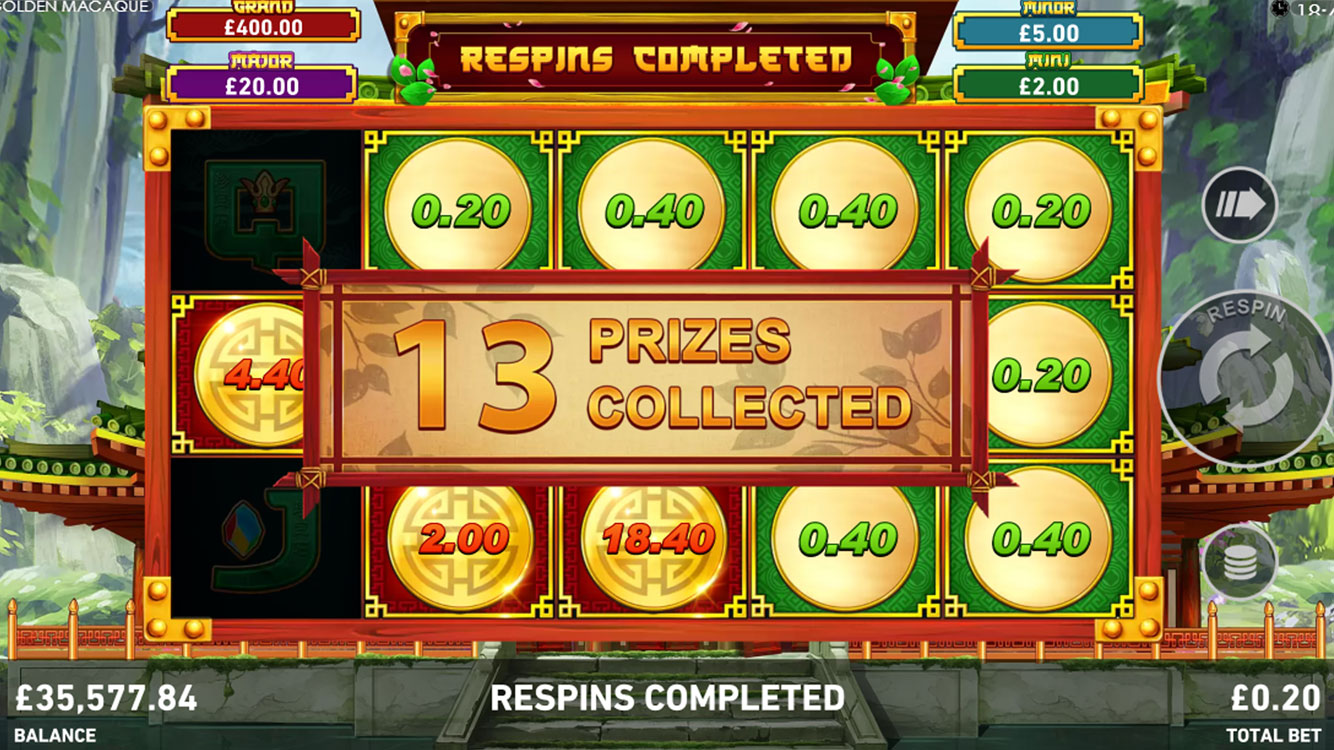 Golden Macaque is a high volatility slot with an RTP of 96.73%.

Set in ancient China, this slot uses a typical Eastern font as well as jade green and gold colours. The background is a pagoda in a valley, yet another image commonly associated with ancient China; the use of wooden textures further plays into this theme and adds to the immersion.

Overall, Golden Macaque’s graphics are well done. The background and picture symbols show a higher level of detail than the other symbols and the reels themselves. The animations are used sparingly and mostly seen during the bonus round when values are revealed and accumulated.

The soundtrack makes use of soothing chiming bells during the base game, further invoking the East Asian mysticism during gameplay. The music becomes more upbeat during the bonus round with the inclusion of flute and percussion. Sound effects are also used throughout, such as a gong sounding and a monkey screeching each time the Gong, and Golden Macaque symbols land and are activated.

Golden Macaque is a great addition to the Fire Blaze games; the theme is exciting and engaging, and all aspects of the slot keep the focus on this.

The gameplay stacks up nicely with plenty of bonus features to keep things interesting. The high volatility and low stakes range are balanced well with the potential to win up to 2,000x your wager.

Golden Macaque is a vibrant, attractive slot and is perfect if you love a feature-filled slot with engaging gameplay focused on an interesting theme.

Play Golden Macaque and a large variety of other online slots here at Wizard Slots.

Does Golden Macaque have free spins?

What’s the RTP of Golden Macaque?

What’s the volatility of Golden Macaque?

Golden Macaque has a maximum win of 2,000x your wager.