Lightning Leopard is a striking online slot by Lightning Box. It has 5-reels, 40-paylines and a wild animal theme. Set in a Native American village, you’ll find beautiful snow leopards, bears, and howling wolves. Lightning Leopards has 2 exciting bonus features. There’s a lightning respin feature where 3 respins are rewarded, and a flippin’ retrigger where lightning bolts are reflipped for potential rewards.

In the middle of the night, the town comes alive! Beautiful snow leopards roam around the icy mountains with a view of the starry sky. See what these lovely creatures get up to as you spin the reels in the Lightning Leopard online casino slot by Lightning Box.

Lightning Leopard is a 5-reel and 40-payline slot with an animal theme. As well as leopards, you’ll find other creatures that come out at night including bears and wolves. The graphics are visually pleasing and the soundtrack is very mysterious.

There are 2 bonus features that you can unlock in Lightning Leopard slots game, as well as a potential jackpot. The respins feature can offer 3 respins, and up to an amazing 600x your stake is the max prize. There’s a flippin’ retrigger feature too, where another set of payouts may be awarded.

How To Play Lightning Leopard

Lightning Leopard is a very easy slot to play; great for newbies and slot lovers alike. Familiarise yourself with the paytable by clicking on the yellow button with purple lines below the reels. Here, you can read the game’s rules and learn more about the bonus features.

Before you begin playing Lightning Leopard, you can place your bet. Betting ranges from 40p to £4. Adjust your bet using the arrows at the bottom of the screen. Once you have placed your bet, you can hit Spin to play your game.

A winning combination is made by landing 3 or more matching symbols starting from the leftmost reel. The symbol to look out for is the snow leopard as this pays out 15x your stake if you land 5 on a payline.

Lightning Leopard has two exciting bonus features; a respins feature and a retrigger feature. The top potential prize available in this slot is a great 600x your stake. 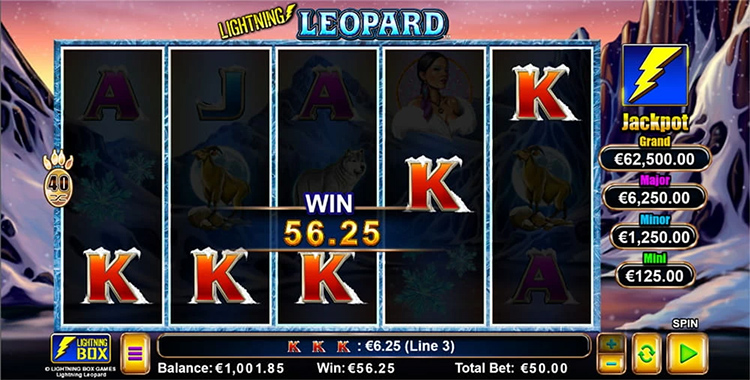 Respins Feature: Activate the respins feature by landing 6 or more lightning bolt scatters on the reels. You will begin the feature with 3 respins. With every respin, the lightning bolts will lock into place, and the remaining symbols will spin.

Lightning Leopard has an RTP of 95.52% and has high volatility. 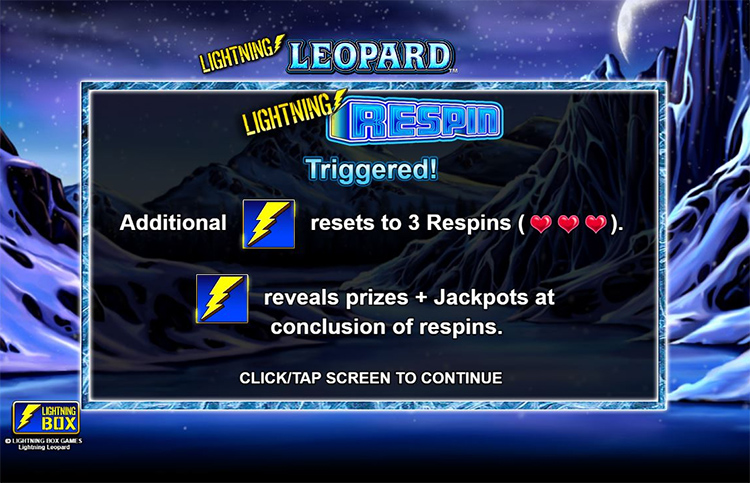 Lightning Leopard has an animal theme. The graphics are stunning, with a beautiful view of the moonlit starry sky and snowy mountains in the background. With regards to the soundtrack, it has a very whimsical and enchanting feel.

On the reels, you will see various wild, animals including wolves, mountain goats, and bears. There are also snowflakes and a beautiful lady with feathers in her hair.

Lightning Leopard is an entertaining slot, and although it does not offer particularly huge payouts, especially when compared to other slots, we still feel it has a lot to offer.

The respins feature can award respins, and you can get another chance to spin with the flippin’ trigger feature. A top potential prize worth up to 600x your bet is to play for in Lightning Leopard.

What is the RTP of Lightning Leopard?

What is the minimum bet on Lightning Leopard?

The minimum bet you can make is 40p.

What is the maximum win available on Lightning Leopard?

Lightning Leopard has a maximum potential win of 600x your bet.

Does Lightning Leopard have any bonus features?

There are two bonus features in Lightning Leopard.

If you enjoyed Lightning Leopard, you may also enjoy other slots by Lightning Box.