Piggy Riches MegaWays is a Blueprint Gaming slot with 6 reel, up to 117,649 ways to win slot with features like up to 7x multipliers, Mega Wilds, free spins, etc. The win multiplier in the game can increase as you go playing. The slot has a cascading reels setup where winning symbols are substituted with new symbols to offer consecutive wins. You can play it here at Wizard Slots, where you can find slots online win real money.

Whenever a win occurs on the reels, the symbols that contributed to the win are removed from the reels and new ones drop from the top to fill the empty spaces left. The winning cascades keep going until no new winning combinations are formed. This is referred to as the Cascading Symbols feature. Stakes in the game start from 10p to £100 per spin on all iOS and Android mobile, PC and tablet devices.

Piggy Riches Megaways is a Megaways version of the classic Piggy Riches promotion slots. It tells the story of rich, opulent pigs. Players will be taken to a mansion where pig statues with harps as water fountains lie everywhere.

The soundtrack to the slot is fun and cheery, keeping you happy throughout gameplay. Symbols on the reels include card values Q, J, A, K and 10, keys, gold credit cards, sacks of gold coins, piggy banks and purses full of cash. The sacks of gold coins pay the highest values of 0.2x, 1x, 2x, 5x or 20x your bet when 2, 3, 4, 5 or 6 land in combination. Piggy Riches Megaways doesn’t have quite as sharp or modern graphics as you’re probably used to. The slot has this classic feel that not many Megaways slots contain.

Piggy Riches Megaways works just like any other Megaways slot casino title where each of the reels can include 2 to 7 symbols appearing randomly. The more symbols appear per reel, the more ways you get to win. If up to 7 symbols appear on each of the reels, you’ll end up with a maximum 117,649 Megaways. Winning combinations can be formed when you successfully match symbols on successive reels starting from the 1st reel – i.e. the piggy bank symbol appearing on the 1st, 2nd, 3rd, 4th, 5th and 6th reels.

The Mr. Piggy Riches symbol is the wild symbol. The wild symbol in the game can stack seven positions high and substitutes all other symbols to help form winning combinations. You can have up to 3 symbols appearing on the reels at a time and multiplier values of up to 7x are displayed. The scatter symbol is represented by the female pig, the Lady Piggy Riches symbol, and it activates the Free Spins feature. More on that below. 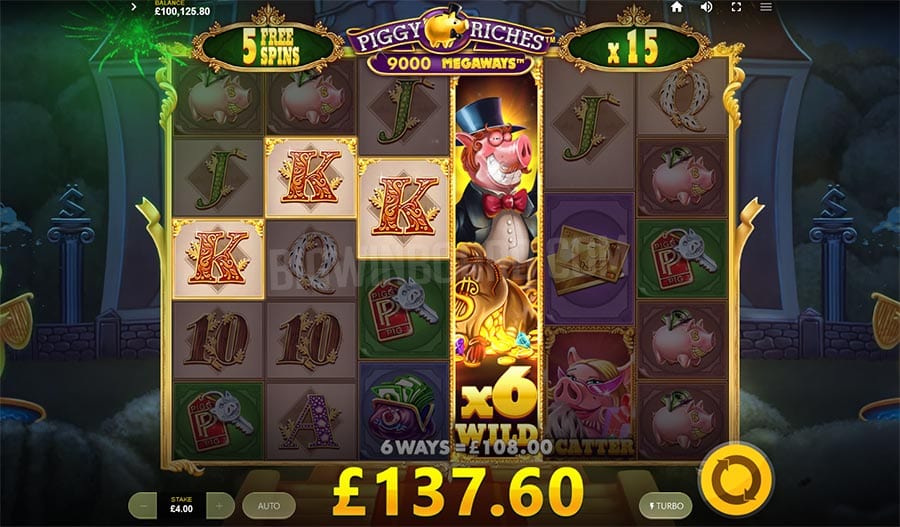 Blueprint Gaming has been operating in the UK. The company has been developing land based and online casino slots for several years. They made the news in 2008 when the company was bought by reputable German gambling company, the Gauselmann group. They’ve been developing live casino slots for several years. The 2008 acquisition allowed them to become more recognized in the industry. The Gauselmann group is well-known for their smiling sun logo and their games are available in slots halls and live casinos.

Blueprint Gaming became better able to establish business partnerships with huge gambling companies and casino operators. Their online slot best games don’t require any download which makes them compatible with a lot of modern online casinos. Blueprint Gaming is licensed to operate in Alderney, where all their games go through high standards of testing.

Thanks to the German bigwigs coming into the picture, Blueprint Gaming became better able to focus on their projects both live and online. In addition to a lot of unique games that they create, Blueprint Gaming develops games borrowed licenses from huge TV and movie franchises like ‘Casper’ the ghost and popular computer game ‘Worms’.

Blueprint Gaming online casino slots usually have two extremes; either they have a simple layout or come with multiple bonus games and features. For the previous, there are X’s and BAR symbols appearing on the reels. Their casino games usually incorporate professional production like 3D design, awesome animation and enjoyable gameplay.  And if you fancy more exciting slots, then check out these slot games. 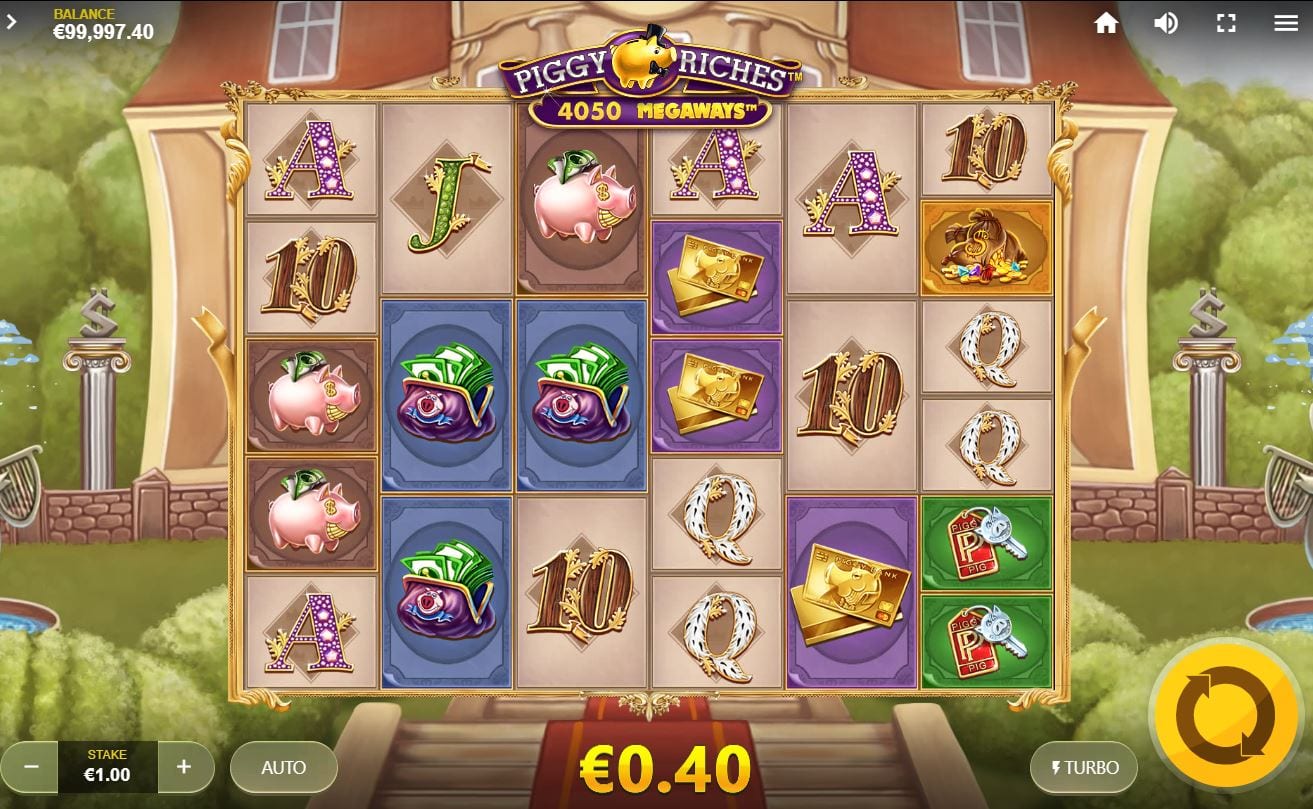 The Verdict of the Piggy Riches MegaWays Video Slot

Piggy Riches Megaways slot is a high variance Megaways slot with an RTP is 95.71% that will guarantee you a maximum win per spin value of 10,474.50x your stake which will most likely be in the Free Spins feature thanks to the increasing win multiplier.

Piggy Riches Megaways is far better than the original version as it offers bigger potential payouts, especially thanks to the multipliers that emerge from the Mega Wilds and the increasing multiplier you find in the Free Spins feature.

You can take the game for a free run before deciding to fully commit. Piggy Riches MegaWays is one of the best Megaways slots released because of its enjoyable gameplay experience and its unique twist on the original. It’s one of the most fun and engaging slots out there, so go ahead and give it a spin to enjoy. Another fun and engaging slot we can strongly recommend is the romantic Lucky Valentine Slot which takes place in the most wonderful city of all, Paris.