If you're looking for an Irish-themed slot that offers something different from the rest, Rainbow Jackpots Power Lines could be the one! Red Tiger Gaming developed this slot, and ever since its launch in March 2020, it's turned countless slot lovers' heads!

Each spin in this adventure will feature 6 reels and 2-7 rows. The trick in this Irish adventure is to remember that a more significant number of rows means more winning combinations will be possible; the slot has a maximum of 49 pay lines. Not to mention, there's the chance to win up to 1,000x your stake in this vibrant 95.68% RTP slot!

If you want to try out Rainbow Jackpots Power Lines right away, visit Wizard Slots online casino and get started!

The Rainbow Jackpots Power Lines slot introduces you to the Lucky Leprechaun that can appear at random. His purpose is to activate features using his pipe - the pipe can trigger a symbol swap or a super symbol swap with large symbols.

You can get started by setting the bet amount, and this slot allows players to bet as low as £0.10 and as high as £4. After selecting the stakes, just hit the spin button and get started!

The aim is to land 3 or more matching symbols on a pay line to potentially get a reward. The grid in this online slots game will constantly be changing, and since there can be up to 7 rows, the winning combinations can go up to 49.

The symbols used in this slot are exciting, with the Golden Shamrock symbol being the most valuable of the regular symbols, while the game's highest value symbol is the Gold Coin wild. 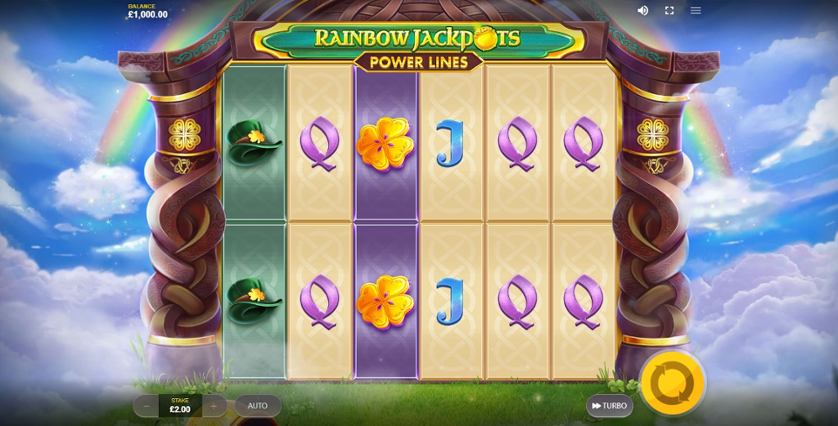 One of the best things about Rainbow Jackpots Power Lines is the numerous bonus features and jackpots it offers to its players. Below is a list of what you can expect to encounter in this slot:

Symbol Swap: First of all, we have the Symbol Swap feature. The Lucky Leprechaun blows his pipe and summons a symbol swap in this feature. Matching symbols will then fly across, and some of them will drop on the reels.

Super Symbol Swap: This feature is very similar to the Symbol Swap feature. The only difference is that the symbols fly across the reels in 2x2 to 6x6 size blocks rather than single symbols.

Free Spins: You can trigger the Free Spins feature in this slot by landing 3 or more of the Free Spin bonus symbols. You have an option to pick between 3 pots of gold, and your choice will determine the number of spins you receive.

Beer Bonus: Players can activate this round by landing 3 Beer Bonus symbols in a single spin. You will be offered 3 glasses and will have to pick one. The higher the liquid goes, the bigger the award will be in this round.

Triple Beer Bonus: The Triple Beer Bonus is similar to the beer bonus feature. The only difference is that you'll receive the combined value of the prize from all 3 glasses instead of 1 glass. In this round, you have the opportunity to get the maximum win of 1,000x your stake.

Rainbow Jackpots Power Lines is a medium to high volatility slot that boasts an RTP (Return to Player) rate of 95.68%.

In this slot, players are greeted by the Lucky Leprechaun with the background set in blue skies with white clouds. You can also see a rainbow in the background, and the reels are placed in a Celtic-style frame.

The graphics of the slot are up-to-date with modern-day slots, and the soundtrack in this slot gives an Irish jig-type touch and makes the game even more enjoyable!

The Rainbow Jackpots Power Lines slot doesn't disappoint with its vibrant design and excellent take on the Irish theme. In addition, the enormous range of bonus features makes the slot even more thrilling.

Who would want to miss out on this  95.68% RTP slot and a maximum potential win of up to 1,000x your stake? Sign up to Wizard Slots to play today.

What is the RTP of Rainbow Jackpots Power Lines?

The Rainbow Jackpots Power Lines slot has an RTP of 95.68%.

Can you play Rainbow Jackpots Power Lines on a mobile phone?

Yes, Rainbow Jackpots Power Lines is an online slot that is mobile-friendly.

The minimum bet on Rainbow Jackpots Power Lines is £0.10.

Can you win real money on the Rainbow Jackpots Power Lines slot game?