Reel bunnies is a new onlineslots game that was officially released on the 17th of  March, 2020. This slot is a non-progressive one, and it embraces very high volatility and an RTP ( return to player) percentage that gets up to 96.6%.

Within a single spin, a dedicated player will expect to win as high as 2,500x the original stake. The slot's development is a product the creative team at ReelNRG, which also doubles as the online slots games provider. Find all the facts about this Easter-themed online slot game before you play on Wizard slots.

ReelNRG is a brand new developer, but the company was recently spotted, signing a good number of valuable partnership deals. The software company had such a productive spring of the year 2020.

Sure, it is apparent that the development capacity does not give it room to catch up with other tech giants that can roll out as many as two new slots each month.

However, before this developer rolled out this title, they also marked their spring calendar with a total of three other spin machines. Some of their slots include:

Find these three and other ReelNRG slots on Wizard slots. 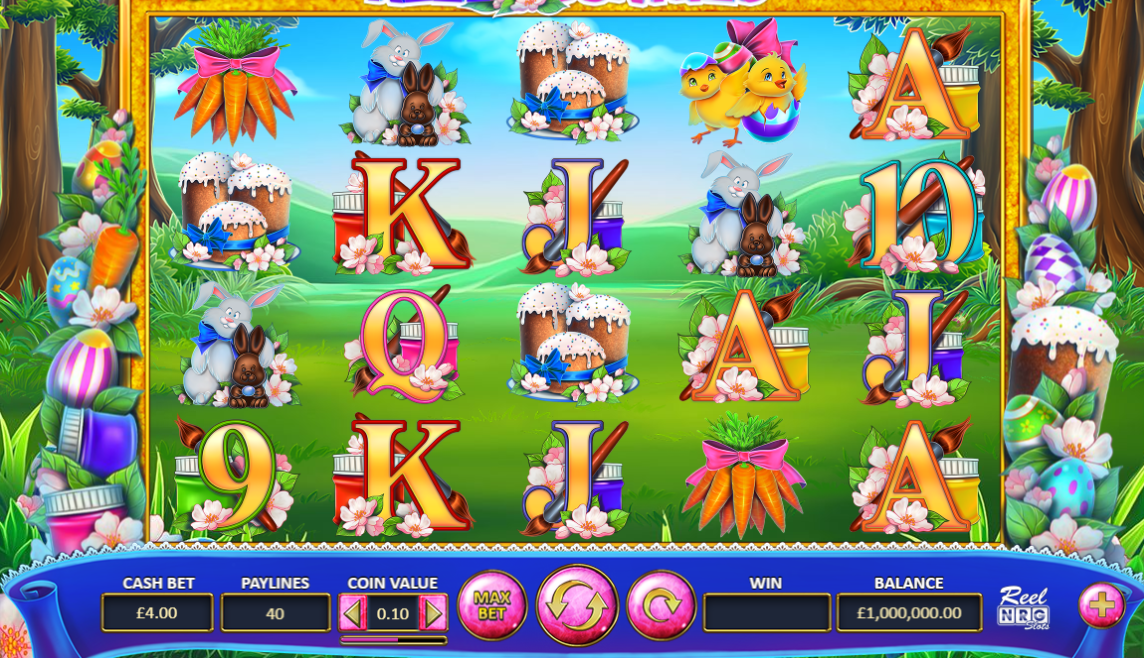 As to the Reel bunnies adaptation, this online slot game pairs traditional Orthodox Easter with a few  Roman Catholic features, with the weird Playboy flavour. Players will spot some delicious Easter cakes, carrots, coloured eggs, and bunnies, plus the stacked Playboy models that are dressed in those easily identifiable black costumes and tights. Oh, let's not forget their ears and fluffy tails.

Joining this obviously odd combination of symbols are the card icons beginning from Ace to nine. These symbols are complemented with some basic animation as well as a joyful and somewhat fairytale soundtrack.

Reel Bunnies is designed like many slots that come with five reels and four rows. However, it features a total of forty fixed win lines. In this game, each of the pay lines can deal with a wager of between 0.01 cent to 1 credit, and it allows low and medium rollers to bet anywhere between a minimal 0.40 cents to a massive 40 credits for a spin.

The Special Icons in this slot are three Wild bunny-models that function as a Wild substitute card. However, it doesn't pay on its own. Asides the wild, there is a set of dyed eggs that act as the online slot's free-spins bonus symbol.

This symbol also does not bestow any standalone wins. It only lands on the game's first, third, and fifth reels. 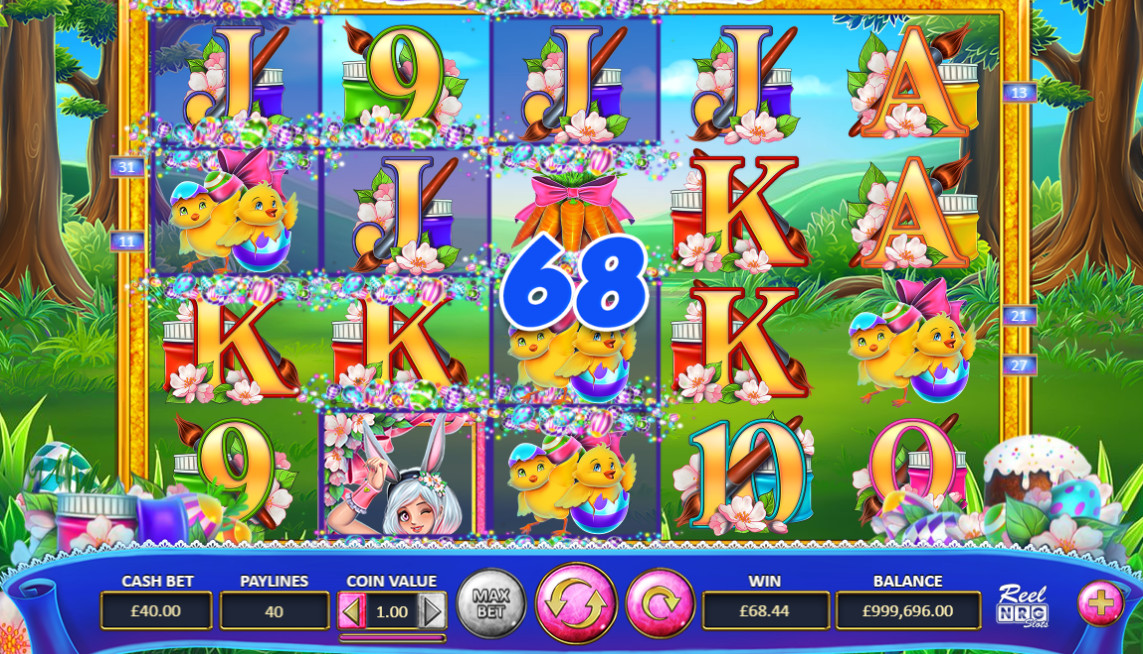 Regular Icons: Here, the rabbit stands as the most valuable item present on the payable because it pays players up to 2,500x the stake per line for a five-of-a-kind combo. Players may win as high as 750x the line stake when they get the Easter pastry or carrots. The cute yellow chicks come with a value that reaches 500x the line bet.

A Five-of-a-kind combo of regular card icons ranging from Ace to nine will offer players anywhere between 500x to 40x multiplier, depending on the denomination.

Also, while the Wild Nudge round is on, a player can count on random multipliers ranging from 2x to 5x their win.

Free spins: On top of the two valuable features that have been mentioned above, the game also comes with a collection of eight free spins, which players can retrigger within the round.

The above are very few compare to the bonuses that can be got from other online slots UK, but you can give them a try by playing with Wizard slots. 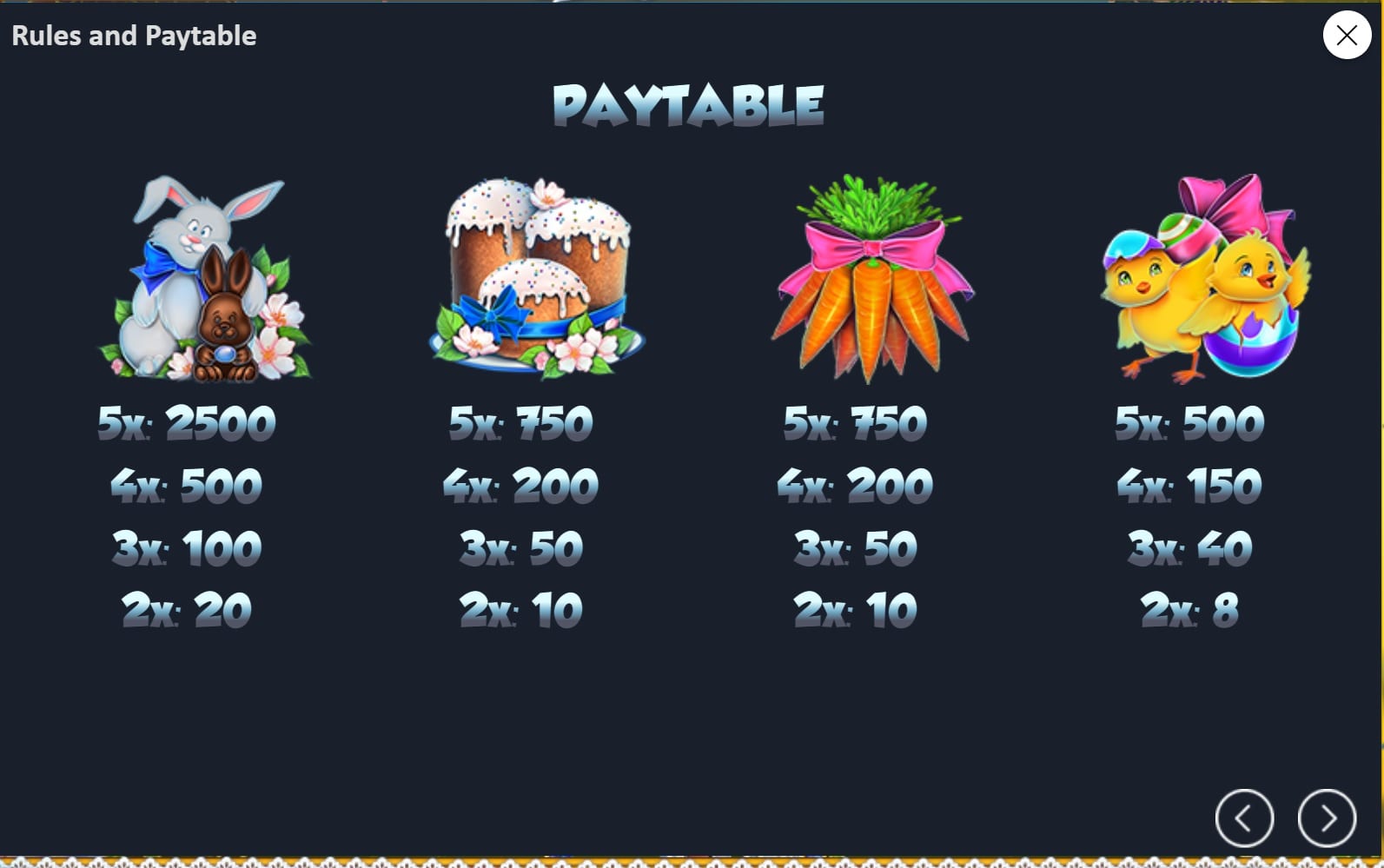 Easter-themed slots are easily loveable when there is so much to be won. While this slot may not offer a lot of extras, you can find other online slots with a similar theme on Wizard slots like the Reel Angels slot.