Slingo’s collaboration with NetEnt, the bingo/slot game Slingo Starburst will be considered a match made in heaven for a lot of punters out there. One of the most popular franchises in online casino meets arguably the most famous casino slots game of all time. What could possibly go wrong?

The short answer is, not a lot. The Slingo Starburst slot is everything you would expect it to be, and even comes with a higher RTP than a lot of the other Slingo games at 96.66%.

You wouldn’t be able to win fortunes, so to speak, with a max win of 1500x but Slingo themselves rate the variance of Slingo Starburst as 2/5, which translates to low-medium. This means you shouldn’t have to wait too long for the wins to start rolling in.

Slingo Starburst has the potential to be one of the best free slot games of the last few years, so don’t miss out and get playing it today at Wizard Slots. But make sure you read on first for everything you’ll need to know about it.

Just like the original Starburst slot, the Slingo Starburst theme is a nice and retro, loosely space-related one. The reels, or bingo board, is set against a purple sky with floating orange orbs, and the ‘80s-sounding synth wave soundtrack really helps to nail that ‘80s aesthetic.

Everything about the Slingo Starburst graphics is pretty beautiful. It’s nice and simple to look at, which is pretty important considering the game itself takes a bit of figuring out. Regardless, you shouldn’t have too much of a hard time in getting up and running with it.

Slingo Starburst was formed as a collaboration between two of the biggest powerhouses in online casino. While Slingo created the mechanics of the game, most of what you see will have been designed by NetEnt, the creators of the original Starburst. Let’s take a look at some of their other best games: 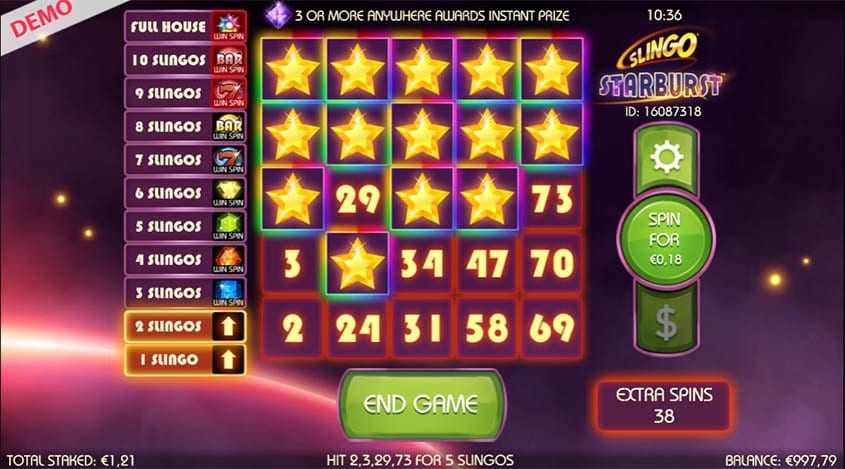 How to Play the Slingo Starburst Slot Game

As we mentioned, learning how to play Slingo Starburst, or any other Slingo games for that matter, can be a bit tricky as there are a lot more rules to it than a standard online slot game.

Before we even think about that though, we’re going to need to grab an account at Wizard Slots to be able to play it. Here’s how:

Now that that part’s out of the way, it’s time to play Slingo Starburst. You can either try out a Slingo Starburst demo first of all for a bit of practice, or jump in and play for real money right off the bat at Wizard Slots. Either way, here are a few tips to get you started: 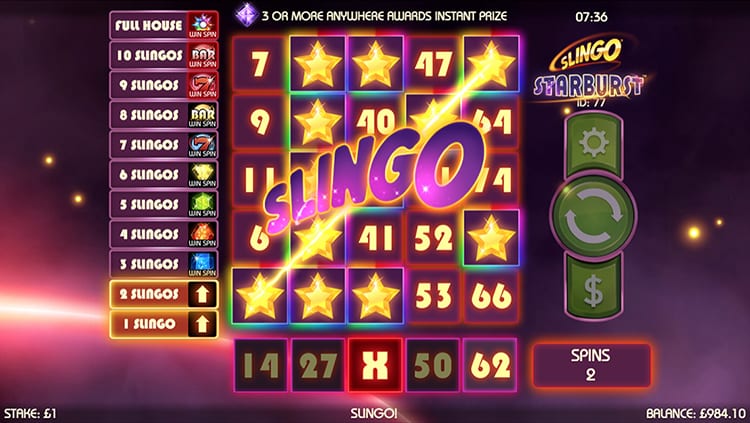 Online slot games typically have a higher RTP than those of online bingo games, with an average of roughly 96% compared to 89% for bingo. However, Slingo Starburst actually beats both of these figures with an impressive 96.66%, which is also higher than most other Slingo games.

Here are the rest of the Slingo Starburst statistics for your consideration.

*All values are subject to change at anytime.

Another reason that Slingo Starburst is better than the other games of the Slingo series is that it has more bonus features. Here’s a look of each of those and how they can help out with your gameplay: 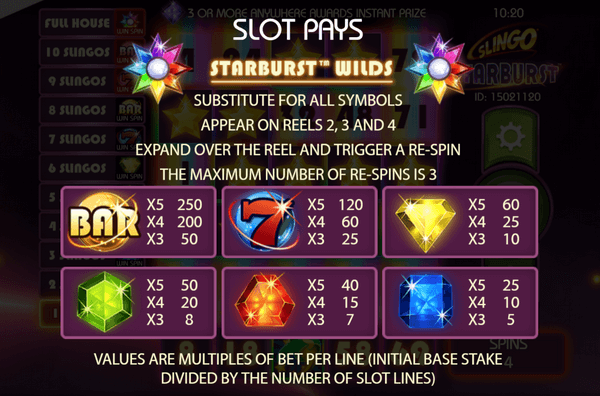 Regardless of whether you have played Slingo before or not, we really recommend having a go at Slingo Starburst. It’s just about the best example of the Slingo game, which is exciting in and of itself.

With better bonuses, better graphics and overall better gameplay than most of the other Slingo games, this is a great place to get started or to continue your Slingo adventures. You might just need a bit of practice first. 8/10. For more slingo fun, check out the Slingo Deal or No Deal game.