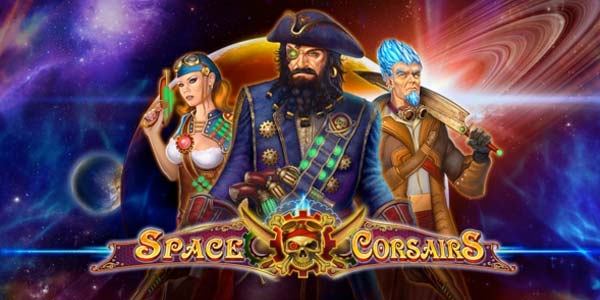 Outer Space is perhaps the last great frontier for the human race, it’s an area of matter that we simply can and never will fully understand. In light of this, up-and-coming developers Playson have built on the concept of space exploration and coupled it with a group of lads more used to sailing the seven seas; pirates.

Despite the lack of correlation between the two themes it definitely does work and adds a bit surrealism to a sometimes saturated online slots market. Spin through 5 reels of intergalactic pirates and futuristic lettering to earn some free spins and space-age rewards. This is probably one of the best casino slots on the internet right now!

Playson are pushing the boundaries of personalized, custom new slot games in 2017, adding to their almost 50 online titles with their technically masterful titles. With each one packed with detailed customer research – skillfully turned into engaging customer-driven content – and vibrant, visually appealing graphics. Based in Europe, Playson provide physical and online gaming solutions to the world.

Prepare for interstellar adventure and epic, galactic conquest in this 5 reel, 15 payline space-pirate extravaganza from Playson – Space Corsairs launches us into the outer reaches of the galaxy into a battle between leagues of villainous Space Pirates fighting over a solar system of treasure!  With laser cannons at the ready, Space Corsairs is our chance to win up to a colossal, cosmic 1000 times our bet!

There are four opportunist space pirate captains on the reels, including an alien already armed to the teeth with a mean-looking laser cannon. He and the female space pirate offer wins of up to £50.00, when 5 symbols are landed, while the most valuable space pirate captain will provide double that - if we are lucky enough to land 5 of him and his cyborg eyes.

The Scatter here is a solar star, about to go supernovae. Landing 3 of these gives us 15 Free Spins, during which we have a good chance of getting an additional 35. Success in the Free Spins feature can also trigger the Map of the Galaxy bonus – in which we get to choose from a plethora of treasure-trove planets and win up to 20x our bet. 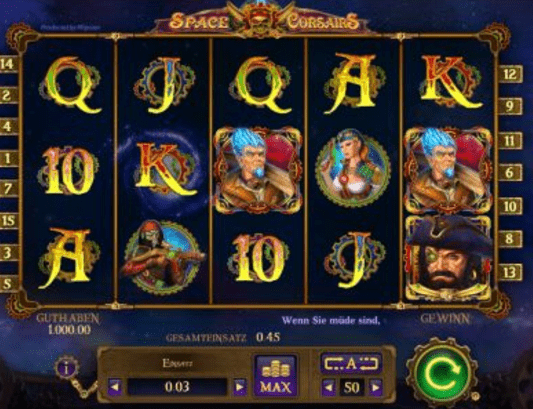 The Wild of the game is a dark, dangerous Black Hole. However, with the extra danger comes the potential for substantial rewards – when the Black Hole triggers a win, it has the power to pull all the symbols around it into orbit, moving them around the board and bringing a new win with every new combination it forces - this can mean 7 different wins on a single spin!

With a coin range here of £0.15 to £75.00, this exciting online slot has as much entertainment as its action-packed audio suggests – this constant, adventurous background music to the game creates an atmosphere that entices quick-fire, bold spins and delivers equally audacious rewards.

The accompanying graphics could be mistaken for being part of an epic RPG on a high-end gaming system. Along with the detail and unique character behind every one of the space pirates, this adventurous arcade feel to the game makes it an absolute galactic gem to play.

Playson have created an epic adventure here. They have combined all the qualities of cut-throat, last-man-standing pirate warfare, with the scope and sc-fi feel of a galactic conquest, all set a long time ago, in a galaxy far far away… Wizard Slots loved every minute of this online game, and it’s a great one to play for both low-level fun, and high-stakes adventure.

For detail alone it would be 10/10, but throw in the original, Black Hole feature and its sheer playability, and it could easily score higher – impossible here, but maybe not in another galaxy!

An equally powerful game is Dr Love on Vacation.