Despite many different Ramesses who have ruled Egypt, the one common thread between them all is a great deal of wealth. This 5 reel, 20 payline allows you to embark on an Egyptian adventure unearthing ancient symbolic artefacts like the Golden Ankh and Eye of Horus. Make sure to stake your claim in this new online slots today.

Opening it’s doors in 1994, Microgaming is one of the most progressive game companies in the entire world. After the release of their Viper software in 2002, the company saw itself sail to new heights to both players and their peers alike. Over the past 10 years Microgaming has paid out more than 100 million in jackpots since it’s inception. Now that’s impressive. 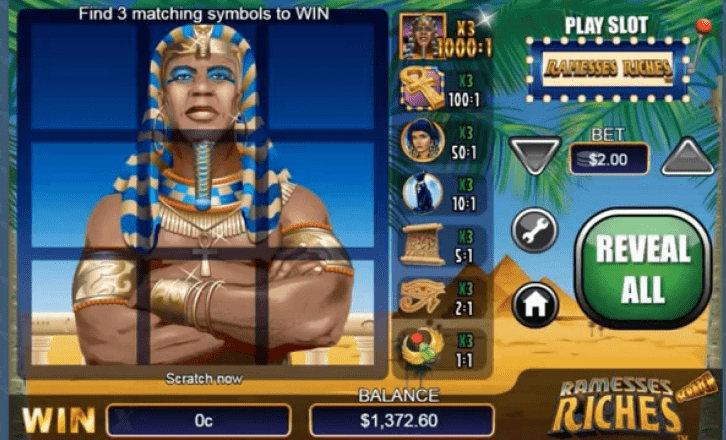 In Egyptian times there were many lords by the name of Ramesses. 10 to be precise with Ramesses XI being the last ruler of the New Kingdom of Egypt. The very first Ramesses was known as Paramessu who ruled a very very long time ago.

Each of the Ramesses have held a significant place in history. Although the true name of Ramesses XI has never been revealed, he is believed to have ruled for 3 decades and even has an online slot based on him thanks to the good folks at Microgaming.

The game devs are known to use a mixed bag of themes all within their extensive catalogue of online slot titles with Scratch Ramesses Riches being no exception, this game is rooted in history as well as intrigue into the life of a man who will forever be etched into the barrows of history.

Microgaming have created an online scratch that is very similar to their slot version of the same name. The game is very pretty to look at, borrowing themes and colours from a very dated setting is no easy feat to pull off, the use of light blues and yellows all create a sense of wonder throughout the game that is sure to excite those who enjoy bright and colourful online games.

Seeing as this is a scratch, the choices you can make are limited, your goal is to find 3 of the same symbol in order to cash out on some rather sultan like cash prizes. You initially set the game from a bet you are comfortable with and go from there.

Bets start as little as 1p and can be played as many times as you see fit. If you want to hurry up to see your fate then you can unveil all symbols on the board by clicking the button that allows you to see what the gods have in store for your wallet.

The main symbol you should be looking out for is the game logo, this piece can reward 1000x the original bet when found in a blockade of 3. Other symbols all feature different multipliers and are all based on something from around ancient Egyptian culture. Expect to find some classic symbols from this one. 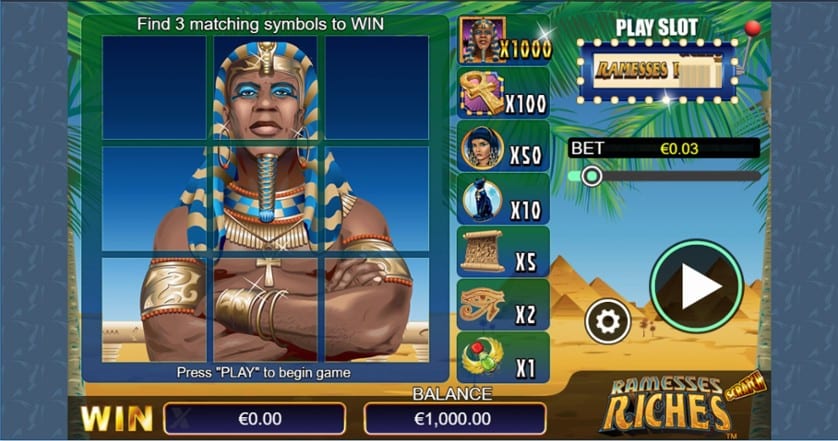 History buffs everywhere will find enjoyment in the reels of this title. That is a straight up fact. A mix of great gameplay and unique graphics equal a rather eclectic game that will provide insight on
Ramesses’ life as well as a look into the time period of this title. 8/10

If you don't fancy thisone then why not play Starburst slots today?