The Best Witch is the all new slots game that sees two amorous and ferocious witches against each other to decide who is the finest witch of them all. The 5 reel gameboard features an array of beautifully animated graphics and bonus reels that will certainly have your potions bubbling over to boiling point. 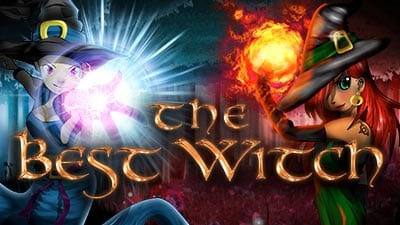 iSoftBet are back with a brand new game, fresh to Wizard Slots called the Best Witch. And it certainly is one of the best witch slot game around. Possessing a reputation that boasts a repertoire filled with big name games like Platoon, Rambo, and The Warriors is often a hard task to follow. With this in mind, iSoftBet are no amateurs and seem to push those benchmarks a little bit further with each and every game they release. iSotBet are one of our favourite providers of slots and mobile slots for the Wizard Slots casino.

The Best Witch centres around the story of two of the most competitive witches known to the fantasy world. This 5 reel game board pits the two against each other in a battle of magic and potions. There can only be one winner, and it has to be you. This 5 reel is set ahead of a mystical world filled with scorched branches, tainted amulets and animated floating witches. It’s certainly at the classier end of the Witch slot game spectrum.

When you first begin to play the Best Witch you will be asked to pick a witch. Following this you will be taken onto a gameboard filled with richly animated graphics and extremely detailed symbols that consist of potions, voodoo dolls and all your favourite WILDS and SCATTERS. For all you players brave enough to play with sound, you’ll be greeted with the sound of trees creaking and the wind blowing a gale.

In a similar fashion to many other slot games the lowest prizes can be won from matching the playing card options of the game. For anyone unfamiliar with these symbols there are; A, K, Q, and J. Moving up the tables the potions can be worth up to 150 x more than these simplistic letter combinations. After this the witches spell book is the next best thing, theres voodoo dolls and then the crystal balls for you to sink you wart encrusted fingers into. The highest symbol on the paytable is the fatal light spell and can see you win up to 1000x more than the lowest symbols on the game.

WILD potions will appear anywhere on the reels and can be transformed for any other symbol across the reels. 3 or more symbols will see you propel yourself onto the bonus round and you’ll get a chance to take part in bonus gams that could see you win up to 900 x times your initial bet. The final witch battle is triggered when you match 3 SCATTERED WITCH TRIGGERS. What will ensue is a game that takes the saying the survival of the fittest up a notch and creates the opportunity to win a whole range of cash rewards and up to 30 free spins.

Although the Best Witch is certainly not one of iSoftBet’s best and most glamorous titles it certainly fits the bill if you’re looking for a game that pits mystical wonders and spell binding potions against a cat fight between too young and modest witches. In addition to this, the graphics and beautifully coloured symbols are certainly not to be overlooked. A solid slot game. 8/10. If you enjoyed The Best Witch then you might also like Spellcraft.