Here's a new vampire-themed online slots, when you think you’ve seen them all, another one pops up on a casino site and the latest one to do so is Blood Queen. This one takes a slightly different look at the vampire legend as we’re plunged into a tale of gothic romance.

The story of the game follows Van Hell, a vampire killer who has ended up in a love-hate relationship with the beautiful vampire queen. Who will live to tell their tale at WizardSlots?

Iron Dog Studio are already known for their unique take on slot games – just take a look at their other titles, such as Treasure of Horus and Neon Jungle. The Blood Queen slot is their first venture into the world of vampires.

Iron Dog Studio are committed to using all of the latest technologies available in their games, and that is plain to see in this slot. The animation is crisp, and the bonus features are full of bite! At WizardSlots we offer a range of games by Iron Dog Studio and other games with the thrilling blood theme: 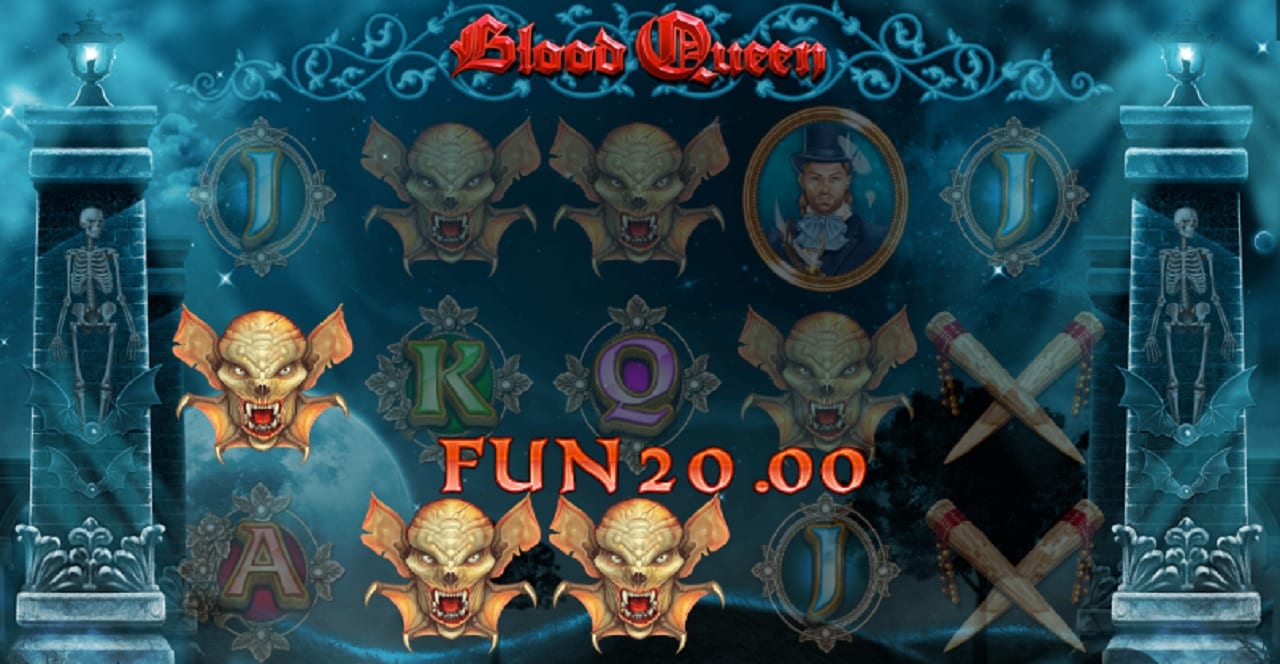 About the Blood Queen Slots Game

You’ll be playing the game outside the vampire queen’s spooky castle. The backdrop overlooks an eerie night sky and two stone pillars with skeleton carvings stand either side of the game board. A faint mist is blowing in the background too.

Some of the symbols on the five reels are downright ghoulish – you’ll spot wooden stakes and frightful gargoyles. Just remember that there are thirty pay lines, though, so it really is worth squaring up to all this horror! Play this game now to know why it's regarded as one of the worlds best slot games online.

On the board, the letters of the alphabet are the lowest symbols. The ones you need for the big payouts are the main characters themselves – the vampire queen and Van Hell. It’s also worth noting the following bonus features.

· WILD SYMBOL – The gargoyles might look like they are your enemy but, as a matter of fact, they are the game’s Wild so will help you win more. It can replace any symbol, except the kiss symbol.

· SCATTER SYMBOL – This game’s Scatter is the kiss symbol, and it can land anywhere. You need at least three of them to get some free spins. Three symbols bag you twenty freebies while four and five symbols activate thirty and fifty extra goes respectively.

· BONUS ROUND – When you get some free spins, you get the choice of playing as either the vampire queen or Van Hell. If you go with Van Hell, you will benefit from the Holy Water Expanding Sticky Wilds. When this lands, it replaces four symbols and remains on the board for another turn. Whereas with the vampire queen you will be given the Blood Potion Wild. This expands as soon as it lands and covers the whole reel. This Wild will then shift along the board with every following spin.

The Verdict on Blood Queen Slots

Even though the two main characters won’t solve their love problems in the game, you stand a pretty good chance of walking away with a considerable jackpot. This is certainly one fang-tastic romance story you won’t forget for a while! If you enjoyed Blood Queen why not have a go at Asgardian Stones slot